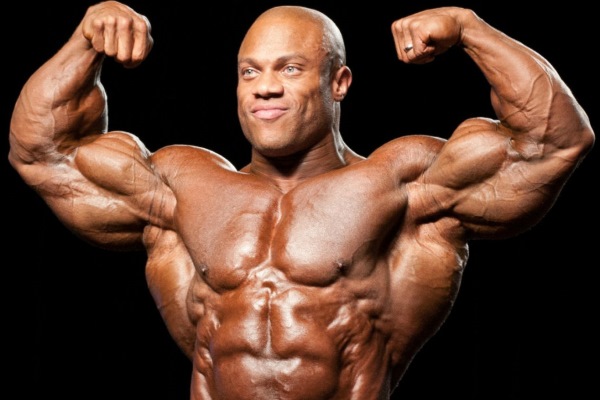 Because this is supposed to be about shoulder training, you probably expected heavy, overhead barbell presses as well as the expected lineup of gargantuan dumbbell raises. Yet, save for a few sets of dumbbell lateral raises, you won’t see Phil Heath busying himself with long-held traditions of tendon-straining free-weight work or lifting at his redline to satisfy his fans or our lenses. Most of his routine consists mainly of machine work, all within proven, muscle-building rep ranges.

PHIL HEATH, SIMPLY WILL NOT BE CONCERNING HIMSELF WITH THE LONG-HELD APPROACHES TO SHOULDER TRAINING. AND NEITHER SHOULD YOU.

“Do you need a fundamental basis of dumbbells and barbells? Absolutely,” he says. “I used to press crazy weight, but it really hurt, and it shouldn’t hurt all the time. Everybody wants to say, ‘This is better than this.’ They may point to research, and what they’re saying might be true—but what if I’m not comfortable doing that? If I’m growing, then that’s all that matters to me.”

Still, he says, naysayers will persist—and practically insist—that he needs to go back to the ham-and-egg approach of pressing to the death.

“They tell me, ‘But if you did free weights you’d grow even more!’ Well, I’m still growing. If I don’t like it and I’m still growing, then I might not want to change that. Every once in a while I’ll do barbell presses, and I hate ’em. And the minute I start hurting, I stop. It reminds me that I’m not doing them for a reason. I have to be smart. I take detours from the norm here and there, and I think I’ve been successful doing it. I’ve built one of the best backs in bodybuilding without doing deadlifts.”

Heath contends that he does do presses but that the tracked range of motion on the Smith and certain Hammer Strength machines allows him to do so more safely. The bottom line?

“I came into bodybuilding with two bad shoulders from basketball,” he says. “I know what works for me and what allows me to train with less pain.”

“Think about your hand placement. It’s not always good to grab the innermost part of the handles, which can overstretch your shoulder at the bottom. For this reason, using a medium grip is highly beneficial. Also make sure you’re getting a full range of motion. When guys go heavy they start shortening the range of motion; they’re just cheating themselves.”

“If you’ve never done these, you need to go lighter, because you have to get the mechanics right. If you have to do seven or eight sets to get it right, then that’s what it takes. You can still go fairly heavy, but remember it’s not a push press— you have to control the weight.”

“I always remember the mental cues of pouring out the pitcher and turning my pinkie up and thumb down. Also, I usually bring the weights toward my hips. When they’re in front of me, I tend to use more momentum. I’ve done 100s before, but going to my sides I can do 80s without roping in my rear delts and lower back—I keep the tension right where it needs to be: middle delts.”

“Not every gym will have this machine, but if you find it, you’re lucky. The only thing you have to remember is that it’s all about your elbows. It’s not your hand, biceps, wrist, or forearm lifting the weight, it’s your elbows. I find that with rear delts, which are such a small body part, more volume is smarter, because you need to be able to feel it. Even 25 pounds on each side with this move feels pretty heavy for me.”

“Not everyone uses this move, but I love it because I get better pumps out of this than with any other exercise for my rear delts. This is basically a multi-joint move for rear delts the way dips are for triceps. Rear delts can never be overworked.”

“A staple move that’s easy to get wrong if you just swing through each rep. Slow things down. Anytime something feels difficult, you’re either going too fast or using too much weight.”

“Most people will scoff at this move, but I like it because it allows me to take my time to focus on one area. I also feel like I can hold the peak contraction longer with this than I can with a dumbbell. It makes me feel a lot stronger than to have momentum and gravity carry it down.”

“Sometimes I try to take stress of my joints by opening up my hands and pushing back against the handles. Being tense with my arms is not going to make me lift more with my rear delts.”

“Doing these one arm at a time allows me to focus more on the working side. Some people think they get enough front-delt stimulation from presses, but at the elite level you can’t leave anything to chance. You need front delts that pop from every angle to give that 3-D effect.”

The most basic argument for free weights is that they allow you to use your body’s most natural and intended range of motion as you move resistance through space. But Heath says it’s OK to use machines…it really is. “Is someone going to tell me that engineers failed at making all these machines?” Heath posits with a laugh. “If so, why do I get a pump when I use this equipment? I’d say look at how much they’ve done for me. End of story.” Heath adds that you should find machines that you’re comfortable with, and if you’re using a piece of equipment that is causing you pain or discomfort, then move on. But using the whole gym— not just what the masses tell you to use—is the key to filling your physique out and maximizing your potential, he says.

“Are free-weight presses the key? Yes and no,” Heath says. “You have to be able to do a lot of volume with heavy weight. If you can lift heavy with really good form and not get injured, then fine. But the majority of people who say they can overhead press a ton, I’d like to see how much volume they do in addition to that and then see how big their shoulders are. Some guys may be able to out-press me, and that’s fine—but they’re just pressing for power. You might be using a little body English, which can negate that move by 20, 30, 40%. And after a while, again, the risk factor comes into play. You have to ask yourself if it’s smart to keep adding more weight or if you should just stay where you’re at and maybe decrease rest periods. If you’re just a weekend warrior who wants to impress your friends, then press away. But those are the guys you don’t see for a while—guys who tear their AC joint or rotator cuff.”

USE VARIETY BUT GAUGE RESULTS

Six exercises is on the top end of what most people do on shoulder day. Variety, Heath says, is a good thing. But he doesn’t just haphazardly change exercises from workout to workout. “I usually change things up every three to four weeks,” he says. “I like to see how far I can progress with that set of movements. It gives me a goal. Everyone says you need to shock your body, but I need a goal. If you’re training delts only once a week you need to be able to track your progress. You have to give your body a chance to adapt before making changes.”

With symmetry being the name of the game, a younger Heath knew that he’d have to make some adjustments to his shoulder training. Woe be to him, his arms were just overpowering everything else. So with the Sandow seemingly within reach, he finally made a game-changing adjustment. “I really believe that prioritizing my delts more than some other body parts was key to getting them to where they are now,” he says. “Years ago I realized that I was lacking the capped delts, and that’s because my arms overpowered them. Delts really are 3-D. Chest isn’t. You can attack them from the back, side, and front and make them pop. I figured I had the chance to look three-dimensional. Also, a lot of guys don’t have good delts. I made sure I stayed on top of that training, and if I needed to double up, I did. Sometimes I’d add side laterals with chest or do some additional rear-delt work on back day. I wanted to make sure that each delt head was trained. The year before I won the Olympia I had people asking what I’d done with my delts. When I won, people were like, ‘Holy crap!’ They had been talking about my lack of width, but I’d negated that advantage for other guys by prioritizing my delts.”

If you’re reading this and you’re in your early 20s, you can probably get away with doing a warmup set and then diving right into your bar-bending military presses. But if you train that way regularly, as you age, those joints—which are so crucial for every upper-body exercise—begin to show a little wear and tear, putting you at risk of more serious injury. Try growing your delts when you’re constantly in pain or, worse, in rehab.

“I’m thankful that I’ve managed to not have too many injuries with my shoulders,” Heath says. “I had to really start from scratch when I began bodybuilding. Your joints can deal with only so much. When you’re 22 you think you can lift the world, but when you’re 35 you realize you need to start warming up better and that if something hurts you gotta take care of it. In this sport, we need to take care of ourselves like pro athletes. We are conditioned to think we need to tough it out or work through it or take a pill—no. There are other ways of healing, and that starts with how you take care of your joints.”

BE SMART ABOUT WEIGHT AND FORM

Bodybuilding is first about building bodies—developing muscle to its limit. It may go without saying, but using weight you can handle safely within specific rep ranges is a vital part of coaxing your muscles into growing.

“I usually stick to the rep ranges listed here,” Heath reveals. “But if I haven’t trained in a month or eaten well, I have to start from scratch. I make sure that I’m focusing only on the tempo and technique as I aim to build strength. So I’ll go in the five- to eight- rep range, with the intention of focusing on form and technique—not as heavy as it sounds. We always hear that practice makes perfect. I can’t stand it, because what if you practice bad habits? If you train the wrong way, you’re not going to get anything out of it. I’m going to benefit more by doing an exercise correctly and with 60% less weight. It feels more powerful when you can do it with good form, without hurting yourself. I don’t have joint pain anymore because I’m doing it right—and look at my shoulders now.”