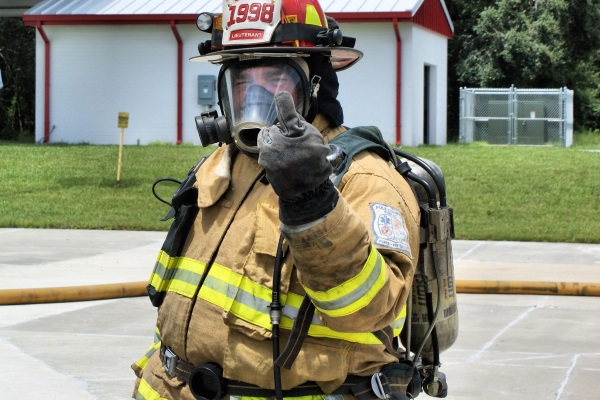 From Science Daily – Humboldt State University
The number one killer of firefighters isn’t burns or smoke inhalation. According to Arcata Fire District Battalion Chief Sean Campbell, it’s stress and exertion, which kills about 50 firefighters each year nationwide. “It’s not uncommon for firefighters working at a scene or just after an incident to die of a heart attack or other stress or overexertion related illness.”

To help firefighters and law enforcement better manage the physical and emotional demands of their jobs, Campbell and other firefighters and police officers are participating in pioneering research by Humboldt State University Kinesiology Professor Young Sub Kwon.

Kwon is director of Humboldt State’s Human Performance Lab. There, he and his team of student assistants are pushing Campbell and others to the limit with state-of-the-art equipment measuring everything from cardiovascular endurance to flexibility.

The goal, says Kwon, is to get a detailed picture of their physical health so he can develop fitness programs for first responders.

“Many firefighters and police officers are not healthy because their jobs put them under stress,” he says. “For example, police officers are often driving. If they need to pursue a suspect on foot, there’s no warming up. They have to run as fast as they can. Through a fitness program, I can help improve their capacity to run without warming up.”

In general, national fitness standards do not exist for firefighters and police officers. For example, over the last 16 years FBI agents have not been tested to ensure they met a level of fitness, according to the New York Times. According to HSU Police Department Sgt. John Packer, who along with other officers is participating in Kwon’s program, once recruits become California police officers, they are not subject to physical requirements.

The same goes for firefighters. According to Campbell, the U.S. Forest Service has an annual fitness standard, and some agencies follow recommended standards set by the National Fire Protection Association. But in general, current firefighters are not required to meet a certain fitness level.

He says that Arcata Fire District, in addition to other California fire departments, use the Candidate Physical Ability Test as a minimum standard for entry-level firefighters (career and volunteer), but they are not required to maintain their fitness.

“You can come in as a new firefighter and be completely fit day one and then you can let yourself go after that,” says Campbell.

“If we’re going to serve our community effectively we need to maintain a fitness level that’s acceptable for our duties,” says Campbell. “This isn’t just for our communities, it’s for ourselves so we can go home to our families everyday.”

Kwon’s experience working with law enforcement began in Kansas at Washburn University, where he was the lead researcher for a fitness testing and training project for the Topeka, Kansas, SWAT team, and for a similar project that studied youth in a rural school district.

Hundreds of miles away, at the Human Performance Lab, Campbell and others have found that Kwon’s tests aren’t walks in the park. They are rigorous runs on a treadmill — in addition to leg presses, bench presses, sideways sprints, and slew of other exercises. Kwon’s program is a series of tests and training “homework” that get progressively harder over the span of four weeks.

For example, Kwon may find that a firefighter with excellent strength may struggle to do the initial test run of 1.5 miles at 7 mph — a moderate level of cardiorespiratory fitness.

In order to improve his speed and reach a good level of cardiorespiratory fitness (1.5 miles at 8.5 mph), the firefighter would follow Kwon’s exercise High Intensity Interval Training (HIIT) program outside the lab. This entails running 1.5 miles for two minutes at a maximum speed of 7 mph, jogging for two minutes, and repeating this until the runner burns off 400 calories.

The following week, the speed level for the test and HIIT program would increase by .2 mph. In other words, the firefighter would need to run 1.5 miles at 7.2 mph for the test. He would then repeat the HIIT program, doing the same intervals and distances, except at a higher speed of 7.2 mph.

Kwon emphasizes that the program is true exercise, not physical activity or sports. “When I was a young man in Korea, I was a body builder and a ‘bboy’ — break dancer — and at that time I wasn’t educated about what exercise is,” he says. “I was doing physical activity or extreme sports, not exercise, which is planned and structured physical activity. To do exercise you need data. Only a university — not a personal trainer — can accumulate data to make physical fitness norms for a special population.”

Even for Campbell, who runs marathons and ultra-marathons, the tests were surprisingly challenging.

Already, the firefighters who are participating in the study are seeing results. “We’d have a meeting and they’d bring in boxes of donuts,” says Campbell. “It used to drive me crazy. There’s been a cultural shift. People are eating healthy and they’re getting skinny.”

One day he hopes other states can use his program as a model to improve fitness for their firefighters and police officers.

The above story is based on materials provided by Humboldt State University. Note: Materials may be edited for content and length.