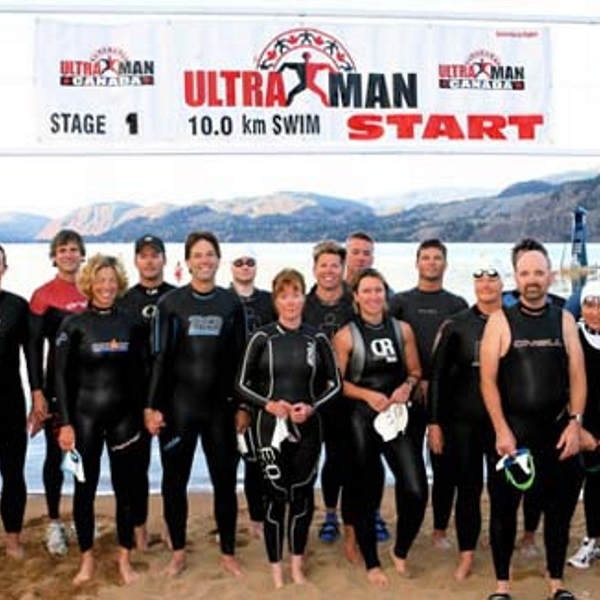 A team of Florida State University researchers found that the endurance competition called the Ultraman can lead to large reductions in body fat, but also causes temporary muscle damage and potentially insulin resistance.

In the European Journal of Applied Physiology, Assistant Professor of Exercise Science and Sports Nutrition Michael Ormsbee and a team of student researchers detail how the human body responds to the competition.

The Ultraman is a three-day competition designed to test an athlete’s physical and mental endurance. The first day is a 6.2-mile open swim, followed by a 90-mile bike ride. The second day is a 172-mile bike ride. And the third day is a double marathon — a 52.4-mile run.

“We’d analyze the competitors on the spot,” Ormsbee said. “We looked at everything we could to get a full picture of their health.”

Ormsbee, assisted by graduate students Chris Bach and Daniel Baur and undergraduate Will Hyder, specifically worked with participants of last year’s Florida Ultraman, held in Orlando. Eighteen of the competitors — 14 men and four women — spent each morning prior to competition stepping on a scale, giving urine samples and pricking their fingers so that Ormsbee and his team could analyze body composition, glucose levels and other physiological changes. Their sample included Florida State alumnus Chris Clark, the first type 1 diabetic to ever finish the race.

Researchers found that overall, body fat percentage dropped, but for many competitors, their weight remained unchanged because they retained so much fluid.

There were also obvious signs of muscle damage, which researchers could see from elevated cortisol and reduced testosterone, among other blood markers. That muscle damage also suggested reduced insulin sensitivity.

The less sensitive the muscle is to insulin, the less glucose will be absorbed, resulting in higher glucose levels. As the race wore on and muscle damage increased, it seems the racers developed insulin resistance, which is the same pathology of Type 2 diabetes.

“Given recovery, their insulin sensitivity likely returned to normal, but it was interesting to see how a presumably healthy activity can lead to symptoms associated with being very unhealthy,” Baur said.

The data raises questions for the future of endurance athletes and what will happen if they are regularly participating in and training for races. But, it could also be used to help athletes better prepare and care for themselves as they train and compete.

Ormsbee and his students were invited to conduct the study by Ultraman Florida. Ormsbee also served as a nutritional consultant to Clark during the race at the request of FSU employee and endurance coach Chuck Kemeny.

Kemeny said he was eager to understand how athletes in general were performing at these competitions and how they could better prepare themselves for competition.

“It’s been very obvious that a number of athletes don’t have an appreciation for nutrition,” Kemeny said. “To have data on these athletes analyzed is really beneficial to future competitors.”

Ormsbee and his students hope to follow up on this research by attending additional endurance events where they can conduct similar on-site research.

The above post is reprinted from materials provided by Florida State University. Note: Materials may be edited for content and length.