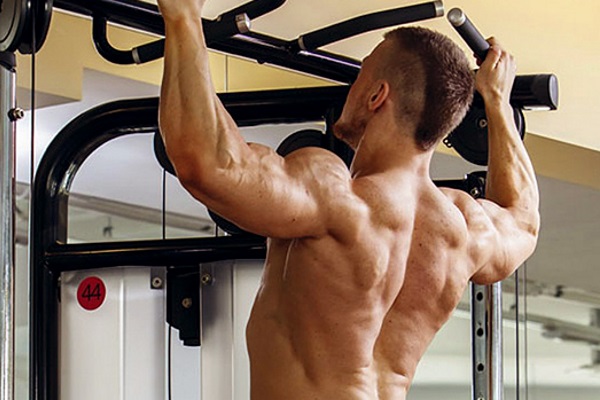 Do You Want More Reps or Better Results?
With many exercises, especially pull-ups and chins, lifters abandon their focus on stimulating muscles in the name of getting more reps in. The second they do this, the whole point of the exercise gets thrown out the back door of the gym.

Aside from the debacle known as kipping, many lifters let go of proper form to get their chest to touch the bar at the top. But just going through full range of motion doesn’t mean you’re using proper form.

Real Pull-Ups Start With Shoulders, Not Elbows
Are you “good” at pull-ups just because you can do a lot of them? Do you have a strong back because you can add extra weight? Maybe not. In fact, looking around most gyms, I seldom see anyone doing the movement correctly for best results.

A pull-up’s target muscle groups are those of the mid and upper back. The lats are a major contributor when done correctly. Of course, the biceps and other synergistic back muscles will help out, but let’s focus on the prime movers here.

In order to engage them, the elbows can’t be the first joint to move when executing the movement. In fact, the shoulders need to be depressed by way of initiating the lift through scapular movement. Having this control of the scapulae engages the back muscles and sets up the rest of the lift to be back dominant, instead of a pull that simply pumps up your arms.

That means that pulling “elbows first” won’t engage your back nearly as much as pulling “shoulders first.” It also means using incomplete ROM and stopping short of a full extension at the bottom of each rep is a silly cheat method that won’t help your development. Check out the video and note the separation between shoulder and neck/head as the movement begins and continues.

Perfecting the Top Half of the Pull-Up
So maybe you know how to pull using the technique described above. That’s good – but let’s take a closer look at the top half of your lift. Pull-ups are probably the easiest exercise to lose form on while doing them. Most people in the gym pride themselves in being able to get their face all the way over the bar, excusing the fact that the lats are only involved for 20% of each rep. Not good.

Look, you may be strong, but your back probably isn’t. That’s why your shoulders are up near your ears at the top of your pull-ups, even though you may have started by using good form. Setting your shoulders is one thing, but maintaining that position through the lift is a very different one, and most people can’t do it.

How can you tell? If you feel sore mostly on the outsides of your shoulder blades (high on the back) the day after doing a good pull-up workout, chances are you didn’t tap into the real lat bellies down lower on the back. Being able to crack out multiple sets of 15 pull-ups is great, but actually using the lats to do it is a different animal. Instead of using everything and anything to pull yourself over the bar, try using your lats exclusively. You may be surprised at what happens to your rep total in a given set.

The Curse of Weighted Pull-Ups

Once a lifter has decided he’s “good” at pull-ups, his next step is to add load. On goes the weight belt with a couple of 45-pound plates dangling just shy of the crotch for a dubious set of six “pull-ups.”

Common sense would say that if you’re already struggling to do pull-ups with good form while using bodyweight, then adding weight won’t be the smartest move. But it all comes right back down to the question that should preface this: why exactly are you doing pull-ups? What’s your goal?

Ask Yourself: Why Am I Doing Pull-Ups?
What’s your goal with pull-ups? Lat strength, lat size, basically anything lat related? Well, you may be wasting your time if you’ve been practicing it the wrong way for ages. Your lats could be inactive and are probably weaker than what your pull-up total actually reflects. Remember, there’s more to the pull-up than simply being able to drag your face over a bar.

But when most people hear “pull-ups” they usually think “back exercise.” And with a back exercise comes particulars – particulars that often go out the window when attempting to lug 45 or 90 additional pounds of weight upward with each rep. Lurching and convulsing over the pull-up bar is as bad as shallow squatting with spine-twisting form.

Extra load isn’t always the way to go. There are plenty of methods where proper form and technique can still take first place if your goal is to develop back strength and size. If you think you’re already good at pull-ups, try the following variations.

Relearn Pull-Ups with Negative Reps
If you can’t do a single pull-up, it’s common advice to start with negative-only pull-ups. Jump or climb up to the bar, then lower yourself slowly. That same approach can be used when relearning loaded pull-ups. Say you’ve decided to strap an additional 45 pounds to your waist. There’s nothing wrong with focusing on good form from the top down using a weighted pull-up. Just stop yourself from dropping like a ton of bricks under the added load.

Do Paused Reps for More Muscle Growth
Using a dead stop during bodyweight pull-ups shuts off the stretch reflex, kills momentum, and creates the perception of much more weight being lifted. Simply pausing at full extension (at the bottom) can be more than enough of a tempo change to elicit a huge response from your lats. It also increases time spent under tension, which can be great for hypertrophy, especially to muscles of the back.

Alternatively, for a challenge to your concentric rep (the pulling up part), try pausing your reps at the top of each lift. This is a true testament to the contractile strength of your lats. It also helps you zero in on maintaining lat involvement for the whole rep. A one-second hold at the top of each bodyweight pull-up using good form can make a world of difference.