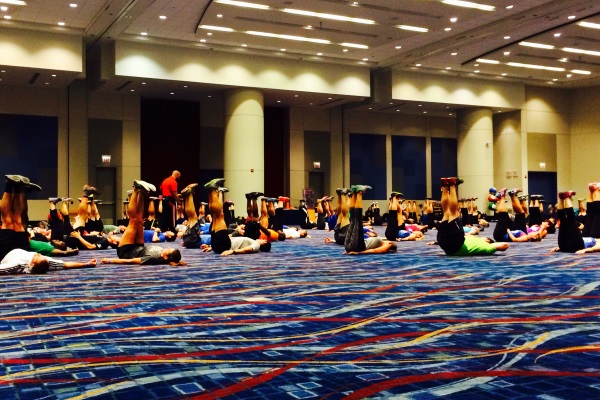 It’s been a few months since I’ve done one of these so lets jump right to it.

1. If you’re a fitness professional (or someone who likes to geek out and rub elbows with some of the industry’s biggest names and/or stalk Dan John) why haven’t you attended a Perform Better event yet?

This past weekend Perform Better was in Providence, RI hosting their second (of three) weekend Summits.

Note: Chicago and Providence have passed, but there’s still a chance to attend Long Beach on August 7-9th.

I’ve been fortunate enough to attend the Summit almost every year since I’ve lived in Boston (9 years), in addition to a handful of PB’s One-Day Learn By Doing seminars. And it never gets old. I always walk away with numerous new ideas and takeaways. And free samples. What what!!

This year I was only able to make it for one day – the last day, Sunday. As it happened my wife, Lisa, had made plans for us to head out to Brimfield, MA for what’s known as Mordor the largest flea market in North America.

She made the plans a few weeks ago, and being the newly minted husband I am I feigned excitement and agreed to go.

“OMG, are you kidding babe? I’d LOVE to go walk around for an entire day looking at antiques, jewelry, and blankets with flower patterns on them! While we’re at it can we go jump into a live volcano too!?!!”

Giving her credit, Lisa was more than accommodating and compromised with me. In exchange for her being able to take the car for the entire day and spend as much time as she wanted at the flea market, she dropped me off in Providence at 8 AM so I could attend the last day of the Summit.

I dropped in and listened to talks by Michael Mullin, Artemis Scantalides, Brian St. Pierre, Dr. Evan Osar, and Robb Rogers, and also had the chance to catch up with several colleagues and friends.

Special shout-out to Artemis who ROCKED her first speaking appearance for Perform Better. She easily had the best title for her presentation: Toning Is For Printers: I Lift.

One of the highlights from her talk was how empowering it is to help women grasp the concept of STRENGTH TRAINING and how that alone can help them attain their aesthetic goals (something I preach ad nauseam on this site). In particular she spoke to pull-ups and how she goes about progressing and programming them for women. While I wasn’t able to film her talk, many of her same points can be seen in the video below by Karen Smith:

I also felt like a pseudo celebrity as numerous people walked up to me to say hello and introduce themselves, and on numerous occasions, in a surreal sort of way, I held open a door for a complete stranger and they’d say “thanks Tony!”

Even more baller was the fact that in a few presentations I sat in on the presenter gave me an unsolicited shoutout. I have to say it’s pretty cool feeling and an honor that I’m recognized by my colleagues.

Nonetheless it was a fantastic day and special thanks to Perform Better for their continued dominance for putting on the best and most professional fitness show on the planet.

2. I originally watched these over on Bret Contreras’ site and figured I’d re-post them here because I really, really1 liked them.

Strength coach and competitive powerlifter and bodybuilder, Eric Helms, did a superb job with this video series and I’d HIGHLY encourage you to watch these if or when you have the time.

I’m only going to link to the first THREE, but there are SIX levels in all.

3. With the success of this website I often get contacted by various supplement, apparel, and fitness companies asking if I’d be interested in trying their product(s). Some are garbage (especially those that are obviously a canned, arbitrary, altogether impersonal outreach); others just aren’t a good fit for my audience (Hey Tony, ever hear of Blindfolded Yogalates Kick-Boxing?); and others, especially supplements, while I do give them an honest “go,” just end up tasting like sawdust dipped in old people fart.

But then again, there are times where I am pleasantly surprised and have no issues spreading the word. One such example is a company called ViewSport.

They use what’s called “sweat activated technology” where an inspirational message appears on your shirt the harder you work. Kind of like how when the ring in Lord of the Rings is put into the fire and a magical message appears, except in this case there’s no ring, no fire, and 100% no magic. Shit.

Both Lisa and I have been wearing our shirts to the gym the past few weeks and love them. They’re super comfy and, while I know better than to think that sweating is an indicator of the effectiveness of a workout, it is pretty satisfying when I get the message to appear.

Check them out. And no, I receive no kick-backs.

4. If you’re not reading Bryan Krahn’s site you should be. His latest article, 10 Reasons It’s Better To Be Lean, Bro is equal parts brotastic and spot on.

5. Based off the recommendation of a friend I just completed reading the novel Ready Player One, written by Ernest Cline.

Anyone who grew up in the 1980’s and 90s will appreciate this book. It’s chock full of pop culture references – Voltron, War Games, Atari, Joust, Adventure, Monty Python, Indiana Jones, Star Wars, Godzilla, cue nerd boner here – from that era as you follow the protagonist, Wade (Parzival), as he navigates through a virtual video game of life and death.

Word on the street is that this book is being adapted by Steven Spielberg as his next film project.

I can’t even begin to tell you how many childhood memories were jolted free from the recesses of my consciousness as I read this book. Sooooo many references that I had completely forgotten about. It actually inspired me to do some YouTube searching and I came across this gem.

Anyone remember these 80’s cartoons?