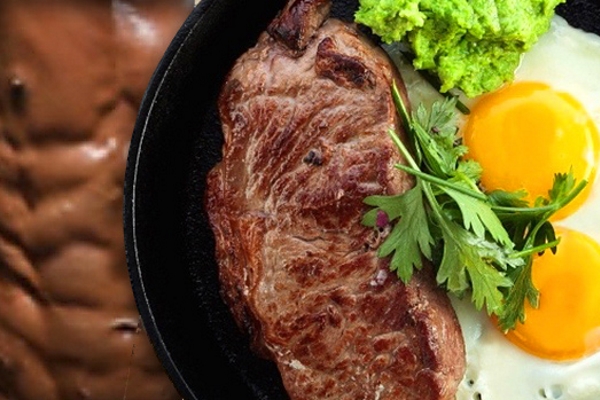 The New Science of Omega-7’s
We all know about Omega-3 fatty acids such as DHA and EPA. But the Omega-7 fatty acids? Science has nearly neglected them… until recently.

Omega-7’s receive nowhere near the public attention of Omega-3 and Omega-6. Some of them are present in foods, and one in particular has potent signaling properties in the body. They’re worth knowing about.

Some TV doctors and supplement companies are starting to talk about Omega-7, but unfortunately their information is largely wrong.

The important Omega-7 fatty acids are:

The first is an important molecule in the human body and is widely present in meats, but not so much in vegetables. Dairy fat is the principal source of the other two.

cis-Palmitoleic Acid Improves Insulin Sensitivity
How would you like to increase insulin sensitivity, increase muscle uptake of glucose, and enhance whole-body glucose metabolism?

All these are highly desirable, and cis-palmitoleic acid has shown very positive actions in these regards.

On this, the evidence is all in one direction: higher cis-PMA gives better insulin sensitivity and provides higher glucose uptake. This is from increasing the number of glucose transporters in the cell membrane, and enhancing the signaling of insulin itself.

Of course, to really know the effect in humans of increasing cis-PMA, the thing to do is to increase it and observe the results. This is easy to do.

There are no human studies on cis-PMA’s effect on gene expression yet, but in a mouse study cis-PMA at moderate levels reduced production of the inflammatory cytokines TNFÎ± and resistin. This is a very good thing.

The same study also found lipogenesis (fat formation) to be reduced due to reductions in gene expression of SREBP-1, FAS, and SCD-1.

A further cell culture study also found reductions in lipogenesis due to reduced expression of several key genes (SCD1, FASN, and ELOVL6) and potential metabolic improvement due to increased expression of CPT1A.

That’s complex stuff, but all these gene expression changes are highly desirable, and are solid reasons why increased cis-PMA may help you.

Where To Get cis-PMA
You don’t have to buy capsules of cis-PMA or seek out weird foods.

cis-PMA is abundantly present in beef, chicken, turkey, salmon, swordfish, rainbow trout, and eggs. It’s less present in lamb and pork, and low to very low in most fish, though cod liver oil has it. Almonds are rich in it, and macadamia nuts or oil are phenomenal sources.

For example, beef averages about 100 mg per ounce. So if you eat a pound of beef per day, you’re likely getting about 1600 mg of cis-PMA. Eggs average about 200 mg each.

In contrast, if you’ve been avoiding animal fats or your consumption is moderate, then your cis-PMA intake will likely be low.

If you wish to increase your cis-PMA intake without increasing meat or egg consumption, try macadamia oil or nuts. The oil provides about 2700 mg per tablespoon, and a 1 ounce serving of the nuts provides about twice that!

How About Supplements?
Do not buy cis-palmitoleic acid capsules, as the available products provide only 220 mg/day at label dosing and are relatively expensive. Foods are your best source.

Want Muscle? Eat Meat and Eggs
I’ve always worked by combining the findings of studies, understanding of pharmacological mechanisms, and careful observations of the real world results of many people.

Meat or egg consumption absolutely helps bodybuilding results. I don’t believe this can be explained just from the protein and amino acids. The fats are also part of the equation.

And the meat or egg fat that has the best argument for improving insulin sensitivity and reducing adipose inflammation, and therefore to help improve muscle mass and body composition, is cis-PMA.

How Much cis-PMA?
Looking at results over many years of several diet types, as well as the biological fact that we are largely meat-eaters, cis-PMA intake should be at least 1000 mg/day, with at least twice this being better yet.

As for the high end, clinical trials have gone so far as to use macadamia oil as the sole dietary fat source! I have no confidence that there’s a need to go that high. A tablespoon or two of macadamia oil is plenty, as is an ounce of the nuts.

If your diet is rich in beef and eggs already, don’t rush to add cis-PMA. You’re probably already getting most of what it can provide. It’s an open question whether more might help you still further.

The Dairy Omega-7’s:Trans-Palmitoleic Acid and Vaccenic Acid
Our final two Omega-7’s are both found mainly in dairy, with no other good sources.

Here’s what you may be saying: “Wait, these are trans fats! Aren’t trans fats bad?”

It’s a fundamental error to lump things together like this and announce sweeping conclusions about the groups.

Trans-palmitoleic acid and vaccenic acid indeed are trans fats, but there’s no evidence of harm. In fact, their increased intake is associated with benefit.

That being out of the way, let’s move to these individual Omega-7’s.

Trans-Palmitoleic Acid
The research here is in its infancy. On the one hand, increased intake is associated with numerous health benefits including:

On the other hand, in all studies the intake has simply been as a part of overall dairy fat intake, rather than of this fatty acid specifically. The benefits of dairy fat might be entirely from different substances.

Vaccenic Acid
Our last Omega-7 is vaccenic acid (VA), which unlike the above has received a little specific study.

In one study, human subjects were given large amounts of either VA-enriched butter or control butter. VA improved HDL and total cholesterol, but effects, if any, on C-reactive protein or oxidative stress were not detected. Insulin sensitivity wasn’t studied, nor effect, if any, on body composition.

More thorough study has been done in animals. When provided as 1% of diet to rats (human equivalence would be roughly 5 grams), VA showed these effects:

Does this apply to humans? Well, the biochemical actions probably do, but for a given dosing level humans might see much more or less of any given effect.

To be certain, I’d like to see more studies. It does appear at this point that VA is a very likely contributor and perhaps even a main contributor to the health benefits of dairy fat.

Again, however, as we can’t buy VA individually, from the practical standpoint we can consider dairy fat itself, rather than overly concern ourselves about contributors.

Where we might think about it is this: Different levels of the contributors could explain greater observed benefits from grass-fed milk than from commercial dairy milk.

However, even so I’d simply get the grass-fed if it’s available and can be afforded, or enjoy the benefits of commercial dairy fat if grass-fed isn’t personally practical.

How Much Milkfat To Consume?
Milkfat helps bodybuilding results, both for mass gain and body composition. This has been observed for decades. This can be as whole milk, as cream, or as butter.

A bit of a trouble point with it though is that very noticeable benefits are noticed mostly with quite large intakes, such as 50-100 g/day. It’s okay to make milkfat the prime fat source, but there’s no need to crowd out other healthful fats.

Here’s what to do: Consume your other healthful fats as well, including healthful animal fats, and if there’s remaining room in your diet, milkfat can be a great contributor. If you add oils for calories, try milkfat instead. See for yourself if you notice a difference, as many have.

Take-Home Recommendations
High intake of cis-palmitoleic acid is healthful and can work towards improving insulin sensitivity and reducing adipose inflammation, which in turn can help your body composition. It’s present in good amounts in beef and eggs, and very high amounts in macadamia oil or nuts.

Milkfat, as whole milk, cream, or butter, is also healthful. Consider increasing intake, as including ample amounts in the diet has often helped bodybuilders and athletes. Multiple studies have shown that higher milkfat intake is associated with improved health measures.