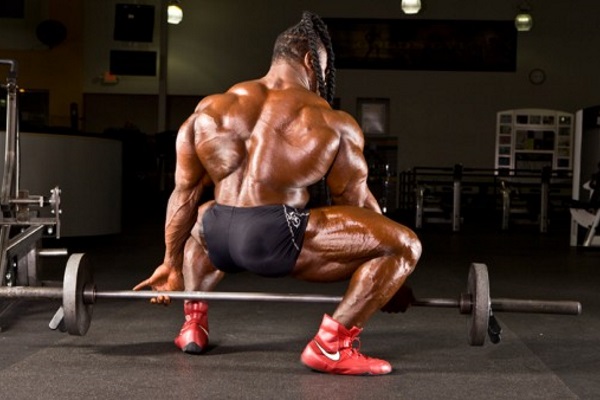 I might like the Jefferson deadlift more than any other version of the deadlift. Yet this amazing exercise is seldom seen in most gyms.

My goal with this article is simple. I just want you to try out this exercise.

An Old Move For New Gains

Named after strongman Charles Jefferson, this lift has been around for a long time. Bruce Lee was even a fan of it. It has also gone by a few other names including the Jefferson squat, Jefferson lift, and straddle deadlift.

The difference between the Jefferson lift and other deadlifts is that you are straddling the bar, hence that last and most descriptive name. That means that one foot is in front of it and one foot is behind.

The Jefferson deadlift centers the mass of the weight underneath the body.

It’s All About the Hinge

By doing this move you get a number of benefits not found in the conventional deadlift, though many of the mechanics are the same:

When executing a Jefferson deadlift, you’ll also feel torsion on your spine. While many would say this is a drawback of the movement, I’d argue it’s the biggest benefit of them all. Once again, life and sport are seldom straight up, but instead involve combinations of twisting and bending. So why not train your body to be stronger in that manner? In fact, when you start lifting some heavy weights in the Jefferson, you’ll be amazed at the feeling that goes all throughout your torso as it works to stabilize.

“Working with the Jefferson deadlift can be done in the exact same way as any other deadlift.”

And despite this odd-feeling torsion, in many ways I think the Jefferson is safer than most other deadlifts. Why? Because the bar is directly under your body. In this way, it is similar to a trap bar deadlift. Since the bar is under your center of gravity, rather than just an inch in front of it as in conventional deadlifts, it’s harder to throw out your back while doing it.

Change Is a Good Thing

One last benefit to the Jefferson is that it is indeed a deadlift – the same, but different. If you’ve been deadlifting for years but only ever do it in a conventional stance or maybe sumo, then why not change it up? This allows you to train the same thing, but differently. Often just such an approach results in new gains.

Adding the Jefferson Deadlift to Your Routine

Working with the Jefferson deadlift can be done in the exact same way as any other deadlift. While it is recommended to start light, just as you would in any new exercise, you may be surprised to find you’re able to use quite heavy loads in this exercise once you’ve trained on it for a while.

For me, this lift was instrumental in helping me lift over 2.5-times bodyweight in a conventional deadlift. It’s also a great exercise for working with partial variations.

Partial reps are another great way to train the movement.

Of course, I recommend you alternating training with your right foot and your left foot forward. As mentioned above, one stance is going to be stronger than the other, but with some work, you can get them close to even.

So the next time you set out to deadlift, try something old that’s probably new for you – start light and work with the Jefferson lift.