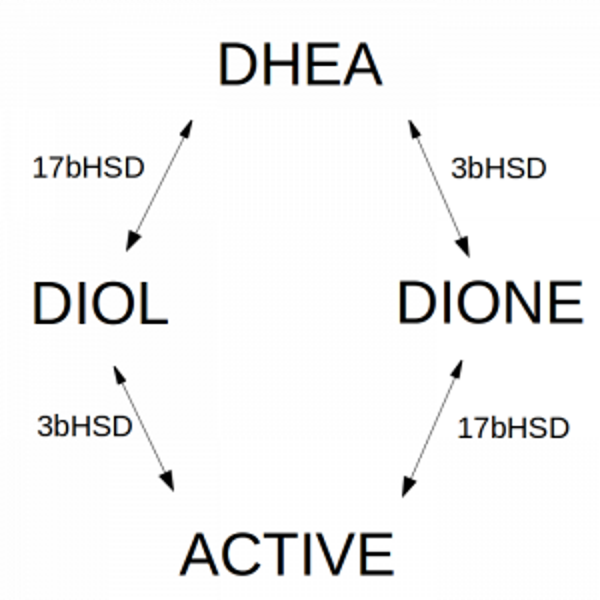 There is a generic term for prohormones that was created when Mark McGuire lied to the public about what he was using when he hit all of those home runs. That term is “Andro”…

Andro is short in this case for Androstenedione but can also be short for Androstendiol and a bunch of other potentially steroidal compounds that are based on the 19 carbon steroidal skeleton. What this means is that “andro” is synonymous with prohormones and they will forever be tied.

Now, Mark McGwire, who ended up causing all of the controversy was not just taking “andro” he was on full blown anabolic steroids. According to wikipedia

“On January 11, 2010, McGwire admitted to using steroids on and off for a decade and said, “I wish I had never touched steroids. It was foolish and it was a mistake. I truly apologize. Looking back, I wish I had never played during the steroid era.”[30] He admitted using them in the 1989/90 offseason and then after he was injured in 1993. He admitted using them on occasion throughout the 1990s, including during the 1998 season. McGwire said that he used steroids to recover from injuries.[31]” wikipedia entry

So, with one single lie, Mark McGwire made andro and steroids public enemy #2 (ephedrine was #1 at that time) and ended our ability to use legal anabolic steroids in the US once and for all.

WHAT WAS ANDRO AND WHAT IS ANDRO NOW?

Andro back in the early part of the decade was the generic term for all prohormones that were natural and little to no anabolic activity. These converted into active steroids in the body. Eventually someone decided to cross the gap and sell the active steroid and this first steroid was 1-Testosterone. There are a few companies that will claim credit for this, but I believe Biotest Mag-10 was the first available anabolic steroid to be sold as a supplement. Prior to that “andro” had little to no direct activity in the body and counted on conversion to “work”.

See the similarities here? All of the same favorites are here, but just one step removed. Being up one step doesn’t mean that the modern prohormones are any less effective converting though, they simply just have zero activity on their own. They probably convert as well or better than the originals. That would be the only difference is the level of activation of the molecule. In theory they may work better because they don’t act as a partial agonist to the receptor and leave the way clear for the active hormones.

WHAT ABOUT STEROIDS ON THE MARKET?

Sure there were steroids on the market like Superdrol, Epistane, Methyl-Stenbolone and others but these were never legal and not technically prohormones. These are gone now and they never really had a place in the legal world of prohormones. These steroids were active, but that doesn’t mean “better” it just means illegal…

So, the industry has come full circle and we are back to the glory days of prohormones. Let’s hope these stay legal for a very long time or you may find that we are totally out of hormone options!