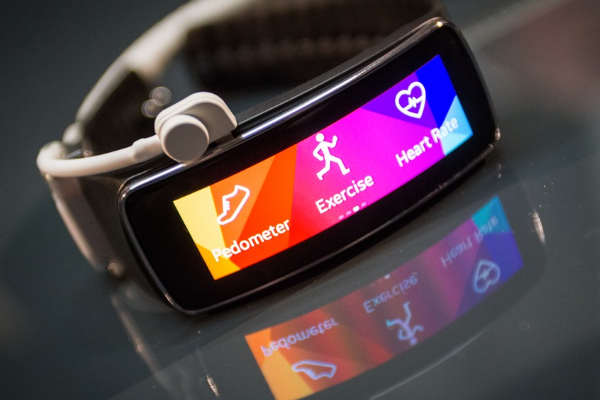 In today’s installment of SuppVersity “On Short Notice”, we’re going to take a closer look at a selection of recent papers from the European Journal of Applied Physiology. To be more specific, I will discuss the physiological and psychological effects of dietary nitrate and their potential significance for team athletes. From there we’re taking a detour to glycogen resynthesis and its interaction with hydration – a topic that may be highly relevant for bodybuilders and at least interesting for everyone else. Before we then take a departing look at the differential effects of 5×10, 10×10 and endurance exercise on markers of protein synthesis and glucose uptake, we’ll spend briefly review the claim that the cumulative physical activity (the one you measure w/ step counters) would lack the characteristic health benefits everyone expects from meeting his daily activity goals.

Dietary nitrate improves sprint performance and cognitive function during prolonged intermittent exercise – While anyone of you should know that nitrate from beetroots can have significant physiological effects, the observations Thompson et al. made in their recent double-blind randomised crossover study are probably real news and above all practically relevant for some of you and/or your clients from various athletic domains (Thompson. 2015).

To investigate the effects of dietary NO3(-) supplementation on exercise performance and cognitive function, the scientists had 16 male team-sport players consume NO3(-)-rich (BR; 140 mL/day; 12.8 mmol of NO3(-)), and NO3(-)-depleted (PL; 140 mL day/1; 0.08 mmol NO3(-)) beetroot juice for 7 days (these are the regular shots you can buy at supplement stores | if you want to drink regular beetroot juice, you need 3-4x the amount). With the nitrate supplement being consumed over a one week period we are thus not talking about the effects of acute, but about the effects of chronic supplementation. Keep that in mind, if you buy one shot and don’t feel the results immediately.

On the test day the subjects completed a prolonged intermittent sprint test (IST) protocol (two 40-min “halves” of repeated 2-min blocks consisting of a 6-s “all-out” sprint, 100-s active recovery and 20 s of rest) on a cycle ergometer during which cognitive tasks were simultaneously performed.

Figure 1: Comparison of total work during the sprints and reaction times during cognitive decision making tasks designed to emulate the cognitive tasks during team sports (Thompson. 2015).

As you can see in Figure 1 both, the total work done during the IST, as well as the reaction times that were measured during cognitive tasks in the second half of the IST, were improved in the beetroot vs. placebo trial.

Even though, the scientists didn’t find a difference in response accuracy, the findings are highly relevant for any athlete who has to (a) perform at high intensities, while (b) maintaining optimal cognitive performance and decision-making reaction times. Who is that? Well, I’d say almost every team sport athlete of whom previous studies have shown that his / her cognitive acuity suffers during prolonged intermittent exercise.

Extra water is not necessary for optimal glycogen replenishment after workouts – In fact, bodybuilders may want to avoid it… Avoid water? No, I am not saying you should not drink water at all, but if you look at the results of Valentín E. Fernández-Elías’ recent “analysis of the relationship between muscle water and glycogen recovery after prolonged exercise in the heat in humans” you will see that too much water in the post-workout window may actually give you the ‘watery’ look some physique athletes like bodybuilders are trying to avoid.

It is usually stated that glycogen is stored in human muscle bound to water in a proportion of 1:3 to 1:4 g. In their latest study, the scientists from the University of Castilla-La Mancha investigated this proportion in biopsy samples that were taken when their trained subjects recovered from prolonged exercise in the heat:

In contrast to what you may have expected, the muscle glycogen replenishment was not impaired by the lack of water in the REHLOW group. Ok, if you look at the data in Figure 2 right, there is a minimal advantage for the adequate water group, but this advantage is not statistically and almost certainly not practically relevant (79 ± 15 and 87 ± 18 g/kg dry muscle; P = 0.20).

What’s even more striking is that the scientists analysis of the ratio in which water and glycogen were stored in the two groups showed that subjects in the REHLOW trial stored the glycogen at the minimal 1:3 glycogen : water ratio, while their peers who got plenty of water exhibited a glycogen : water ratio of 1:17. Needless to say that this difference in water storage may be very important for bodybuilders during the last days and hours of their contest prep. In view of the importance of optimal hydration for your health, cognition and the hitherto unproven hypothesis that increases in cellular water may be involved in the hypertophy response to exercise (including the efficacy of creatine | Op‘t Eijnde. 2001), (non-)rehydration practices as they were used in the study at hand are nothing I would generally recommend.

Study says: Only continuous, not accumulated 30 min of walking will improve your glucose sensitivity – While step counters suggest that all you have to do to improve your health is to take “X” steps per day, the conclusion of a recent study from the DSO National Laboratories in Singapore refutes the simple and beautiful idea that you can distribute the X number of steps you would usually take during 30 minutes of brisk walking over three or more small “exercise servings” and see the same benefits as you’d see with 30 minutes of continuous brisk walking: 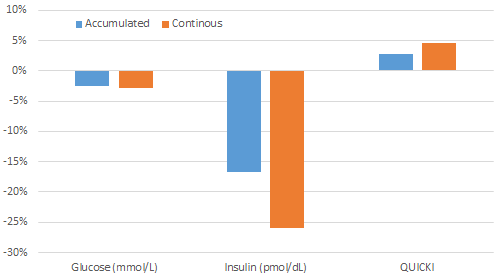 Now, as you’ve read a few lines above, the scientists say: Only the continuous walking is beneficial. Well, I don’t know about you, but if I look at the study results in Figure 1, I wouldn’t say that the data suggests that only continuous brisk walking would be beneficial. In fact, the early morning glycemia, which is by the way a pretty stupid measure of glucose tolerance anyway (cortisol rises in the AM and ruins the results), is very similar and the OGTT data in Figure 2 shows no practically relevant effect or difference either.

With that being said, you can still rely on your step counter as a guide to a health-relevant amount of activity. What is important is that you get your physical activity in; and not that you do it in a continuous matter (even though that may offer small benefits in the study at hand). Plus, you will remember: Especially for those with some extra-weight on their hips “Increasing Physical Activity Just as Effective as Strength, Endurance or Combined Exercise to Lose Fat and Build Muscle” | re-read the SV article. 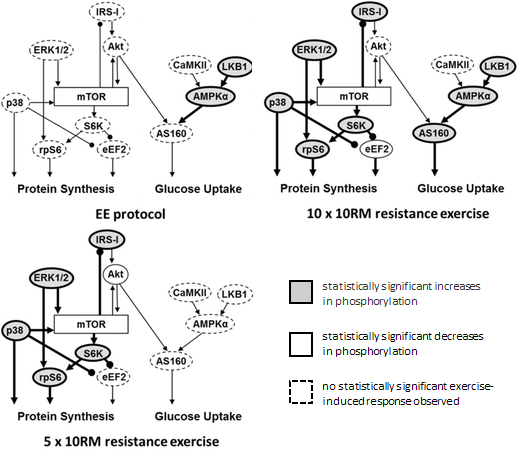 Are you missing something? Yes, the -TOR study. The one with the different exercise types and volume and the effects on the signaling pathways regulating skeletal muscle glucose uptake and protein synthesis after workouts. So why did this interesting paper not get more room? Well, the answer is simple: If you determine only markers of protein synthesis, glucose uptake & co in response to 5 × 10 repetition maximum (RM) resistance exercise (RE) with leg press device (5 × 10 RE; n = 8), 10 × 10 RE (n = 11), and endurance exercise (strenuous 50-min walking with extra load on a treadmill; EE; n = 8) you generate results with little practical relevance. After all, we know that an increase in mTOR phosphorylation does not tell us that the actual protein synthesis let alone the long-term gains increases, as well – since those were not assessed in the Ahtiainen paper, their results are rather of educational than practical value.

The educational value is thus also the reason I still mention the study. I mean, I didn’t want to deny you the opportunity of looking at the scientists’ excellent “summary of exercise-induced responses in signaling proteins and their selected signaling pathways” in Figure 5 – even though, the cause-and-effect relationships are still ‘hypothetical’ in parts 😉