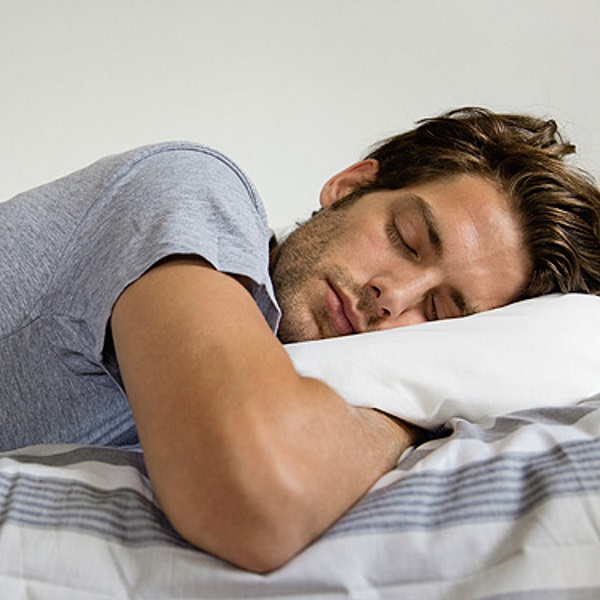 Older men can sometimes double their testosterone levels by getting more sleep, according to a human study that Plamen Penev of the University of Chicago published in Sleep.

Nearly all of us probably get too little sleep, mainly because we are seduced every day by the technology around us. It enables us to generate light at night, provides us with 24-hour entertainment and information through electronic media, and makes it possible for us to have contact with each other whenever we want. Every evening, when our body tells us that it’s time to sleep, we can also do a thousand other things instead.

Sleep & hormones
Too little sleep messes up our hormone balance. It makes our body less sensitive to insulin for example. Dutch researchers recently showed that after just one night of four hours’ sleep, young men’s insulin sensitivity went down by twenty percent [J Clin Endocrinol Metab. 2010 Jun; 95(6): 2963-8.] and that of diabetics by a quarter. [Diabetes Care. 2010 Jul;33(7):1573-7.]

In the latter case, lack of sleep is clinically relevant, so doctors could advise diabetics who react insufficiently to their medicines to get more sleep. “Sleep duration might become another therapeutic target to improve glucoregulation in type 1 diabetes”, the Dutch researchers say.

Sleep & testosterone
Testosterone is also affected by amount of sleep. That’s not so strange, as our bodies make much more testosterone when they’re asleep than when they’re awake. [J Clin Endocrinol Metab. 2005 Aug; 90(8): 4530-5.] We’ve taken the figure below from the study mentioned here. It shows how much testosterone is present in the blood of 22-32 year-old men while asleep and during the rest of the day.

Penev based his theory on, among other things, research done by Eve Van Cauter, a sleep researcher at the University of Chicago who has celebrity status in the field of endocrinology. Van Cauter discovered early in the 21st century that men in their forties make less testosterone while sleeping than men in their twenties.

Study
Penev measured the amount of testosterone 12 slim, healthy, non-smoking men aged between 64 and 74 had in their blood in the morning. He also got the men to wear a small gadget around their wrist, which enabled him to see how many hours per night the men slept. That varied from 4.5 to 7.5 per 24 hours. The longer the men slept, the figures below show, the more testosterone there was circulating in their blood.

Conclusion
“These findings suggest that complaints of poor or insufficient sleep in otherwise healthy older men can be associated with a more pronounced age-related androgen decline”, writes Penev. “Eliciting such sleep complaints in the physician’s office may facilitate the judicious interpretation of lower testosterone levels in the older male patient.”

Before men consider doing testosterone therapy, they might first measure the amount of sleep they get. And ‘measuring’ is different from ‘guessing’ or ‘estimating’. Most people overestimate the number of hours that they sleep. This was also the case in Penev’s study. The men thought that they slept seven and a quarter hours per day on average, but Penev’s recordings showed that they only slept six hours a day.