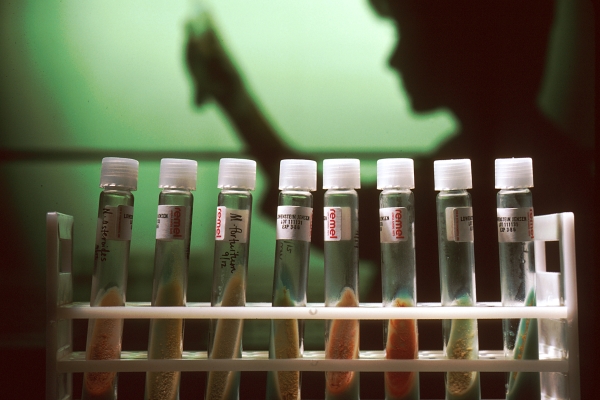 Scientists have underestimated the strength of oral anabolic steroids such as methandienone and stanozolol. Incorrect methods have been used to measure the strength of these anabolics in test tube studies. Two researchers at the University of Texas write this in an article that appeared in the Journal of Steroid Biochemistry & Molecular Biology.

According to researchers – and many gurus reiterate this uncritically – many steroids are overrated. They base their comments on tests in which for example a cell containing androgen receptors is brought into contact with molecules of a powerful androgen such as methyl-trenbolone. The researchers measure how many androgen receptors are activated and then add the steroid in question to their androgen cell. Then they measure how much of the steroid is needed to knock the methyl-trenbolone off the receptor. The more molecules you need to do this, the weaker the steroid is.

That leads to figures like the one below. The Texans based this one on tests with human cells.

On the basis of this kind of study, some researchers have formulated the theory – uncritically picked up by gurus – that the effect of steroids like stanozolol and methandienone doesn’t go via the androgen receptor, but that they have a ‘non-genomic effect’.

But, it is possible to study the strength with which steroids attach themselves to androgen receptors in an organism that you have given steroids. The researchers mentioned in this article did their study with rats. An hour after administering the steroids they measured how many androgen receptors were still free in the muscle cell nuclei. Once an androgen receptor has formed a complex with an androgenic hormone [ligand is the technical word here], then the complex attaches itself to the cell’s DNA. In the short term therefore, you can measure the effectiveness of androgens by counting how many receptors are still free in the cells after administration: the more there are, the weaker the steroid.

Now – according to this method of measuring, methandienone and stanozolol are really quite effective.

If you look at the depletion column in the table above, you see that the difference between stanozolol and methandienone on the one hand, and testosterone on the other is limited. Then again, methyl-testosterone is a pretty worthless steroid.

In real, living cells things happen that cannot be simulated in the conventional laboratory tests, the researchers conclude. As far as they are concerned, the theory of the non-genomic effect of some steroids is just that: a theory.