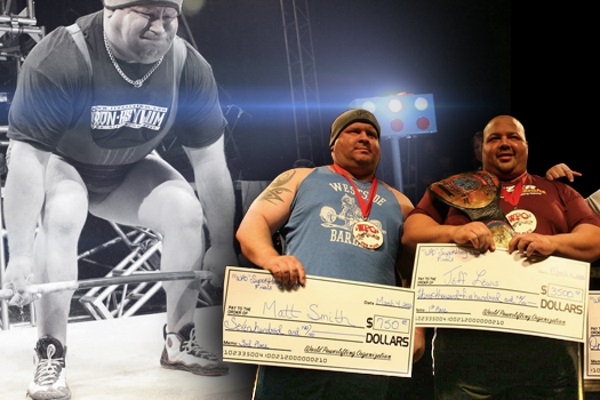 For most of my lifting career, I was a member of Westside Barbell. When I came to Westside I had very little knowledge on how to train. My training prior to Westside was simple:

Once at Westside, I followed the basic training template. Sunday was our dynamic bench day and we would do our eight sets of three using a variety of bands and chains for accommodating resistance. After this we would finish off our triceps with some type of triceps extension followed by cable pushdowns. Once our triceps were fried, we would move on to rear delts and lats to finish off the workout.

Monday was max effort lower body. When choosing our exercise to max out on, we lived by the rule that 6/10 workouts were some type of good morning, 3/10 workouts were a low box squat, and 1/10 was either a pin 1 pull or a reverse band deadlift. Max effort was not about how much weight was lifted but about the time under tension, that three to five second strain equal to the time it takes to complete a max competition lift. After max effort, average workout was glute ham raises, reverse hypers, and standing ab crunches.

Wednesday was max effort bench day. The same principle of time under tension applied. Most were done with a close grip for strong arms. Exercises we rotated were floor presses, board presses and incline presses, all using a variety of band, chains or straight weight, as well as reverse band presses. Next was some type of triceps extension followed by cable pushdowns, rear delts and lats to finish off the workout.

Friday was dynamic lower body. This was the only day we used any type of gear to train in, typically using squat briefs. Depending on where we were in a training cycle, sets were 5-16 sets of 2 reps. Higher set with a lower percentage used after meets and or more than 12 weeks out from a meet. As I got closer to a meet, sets got fewer and percentages got higher. Specialty bars were used except the last few weeks before a meet. After our squats, 8-10 singles were done on deadlift for speed to train our form. Finishing up with glute ham raises, reverse hypers, and standing ab crunches.

Detailed below is my adaptation of the training at Westside that resulted in my best numbers. Here are additional notes to help you make sense of the program and how to use it:

I have never been able to push my knees out very good due to hip issues. This made it impossible to deadlift sumo correctly, so I use a conventional deadlift style. This also affected my squat. I sit back and use a lot of lower back when squatting. Due to my way of squatting and deadlifting, I chose exercises that focused on strengthening my lower back. Variations of good mornings were my favorite exercise. Good mornings were good for developing form as you are forced to drive the head back into the bar to start the bar moving. Variations of low box squats work well for hamstring and lower back development. By sitting back as far as I could, I had to lean forward to reach depth. This helped to build my lower back and hamstrings. Pin pulls and reverse band deadlifts were my testers to see if my training was on track. Reverse hypers and glute ham raises were also used to further strengthen my lower back and hamstrings.

I like to do heavy pin lockouts with a close grip for about a 6” press or 5-board presses also with a close grip to strengthen my lockout on Sundays after my speed work for heavy 3-5 reps. I prefer full range presses such as the bow bar press, incline press, reverse band presses and 50% with chains for strength builders on max effort day. To be clear on the 50% press, I would warm up with two chains per side and work up to 50% of my max shirted bench. Once I got to 365 with two chains then each set I would add one chain per side until failure. Two and three board presses and floor press with a middle grip were additional exercises that were good strength builders.