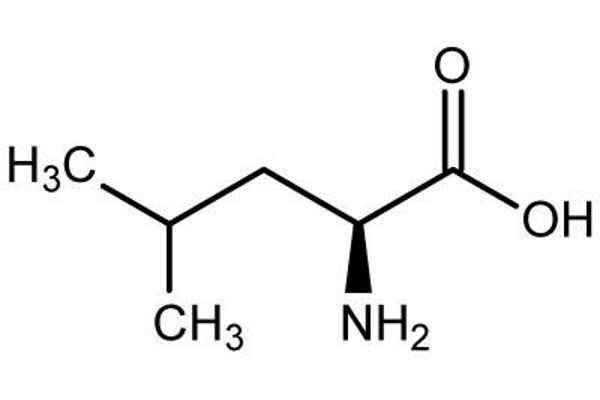 Strength athletes who use leucine say that they lose fat as a result. Their claims may be founded. According to an animal study done at Columbia University, leucine not only stimulates muscle growth, it also boosts fat burning.

Leucine
Leucine is a BCAA. In most BCAA supplements, leucine is the most commonly found amino acid. The same is true, but less so, for whey-based protein concentrates. Since it has been known that extra leucine enhances the anabolic response of muscle cells to amino acids, strength athletes have been experimenting with leucine supplements.

The effect of leucine supplementation is sufficient to limit muscle mass breakdown during a period of inactivity. The optimum leucine dose is not yet know, but it may well be on the high side.

Animal tests have shown that leucine supplementation not only stimulates muscle tissue growth, but also the synthesis of collagen [Nutrition. 2004 Feb;20(2):213-7.], so leucine may also help strengthen joints. Epidemiological studies suggest that a high leucine – or BCAA – intake reduces the risk of overweight.

Study
Pretty interesting stuff, leucine. A study published in Diabetes in 2007 makes leucine even more interesting. In this study the researchers did experiments on mice. Half of the animals were given ordinary feed [Chow] and the other half were given feed with extra fat [HFD]. Half of the Chow and HFD mice were given 55 mg extra leucine each day in their drinking water [Leu]. This doubled the leucine intake.

Results
The leucine supplementation was done for 15 weeks. In this period the HFD mice became fatter. But in the HFD mice that got extra leucine the increase in fat mass was a quarter less.

When the researchers monitored the mice’s oxygen expenditure over a day, they saw that the mice on leucine used more oxygen. That means the mice burned more calories, and that’s probably how leucine suppletion inhibited the growth of fat reserves.

An analysis of the muscle and white fat cells from the lab animals showed how this worked: the leucine supplement enhanced the synthesis of the uncoupling protein 3 [UCP3]. UCPs boost the mitochondrias’ burning ability. They ‘decouple’ the burning of food and the production of ATP.