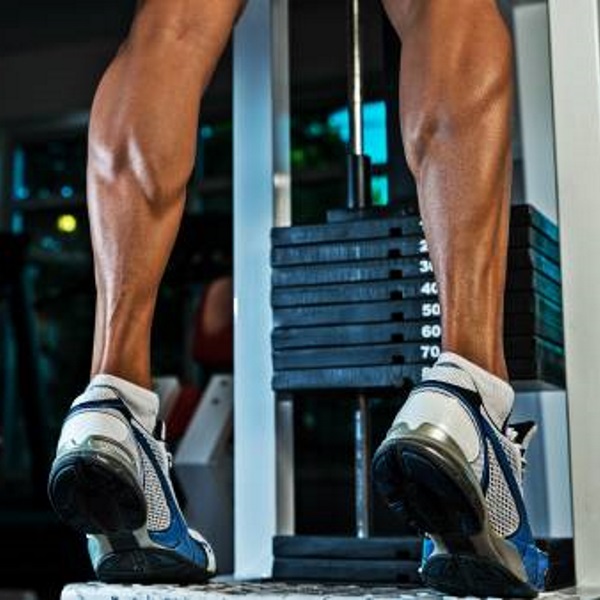 The calf raise is an exercise that is widely and incorrectly used. In its most common form, with the athlete standing, and moving up and down like a dancing cockatoo, the calf raise only contributes to the problem it’s intended to remedy.

What the Calf Is Designed For

Biomechanics and physics help us understand why the calf raise won’t strengthen the calf properly, or at least usefully. The calf muscle exists as a spring tensioner for the nearby Achilles tendon. When the calf contracts, it doesn’t shorten but braces itself against the back of the shin bone and behind the knee. Anatomy indicates that this is just what the calf is designed for: each muscle fiber is lined at a slant, not vertically, producing an oblique tug on the surrounding tissue, not a longitudinal one. This brings a tension to the attached tissue and gives the Achilles tendon something to grab onto so it can work like a spring to propel you forward or up. This a crucial contraction for fundamental movements in sport and exercise.

The issue is, in modern times, we’re not using the calf muscle to brace the Achilles as well as we used to. In specialist jumping animals like the wallaby, the equivalent tendon reutilizes about 95% of the energy that goes into it with each step – a huge amount. But we’ve become used to not running and jumping and we’ve become accustomed to wearing shock-absorbing shoes instead of employing our Achilles to effectively recycle force impact from the ground.

We need more than a calf raise to fix this. We need exercises to create a calf that is repeatedly available to brace for every step so the Achilles can spring effectively. The exercises I would recommend are barefoot or minimalist shoe impact activities on firm surfaces, preferably on one leg to improve foot feedback and reactive strength.

The simplest of all of these is to go barefoot or trail running. When we run, each step causes a huge shock to the leg known as ground reaction force (GRF). On average, GRF is about four times your bodyweight. The foot contacts the ground for anywhere between a tenth of a second and a quarter of a second, so you get four times your body weight in force applied for a fraction of a second. A calf raise simply cannot replicate that. It is worth noting that barefoot running has a high risk for injury, and the first time you decide to run barefoot, the length of your driveway is a good distance to start. Sudden changes to training circumstances are a high risk for injury and you can’t be too careful.

That is why these drills are so good. They are self-limiting. The moment your feet can’t keep up with a jump rope, it clips your feet and you stop. Trail running is similar– tripping will catch you out. The failure of your nervous system to get the signaling right will be the reason you can’t keep up and that’s the best feedback to your current level of capability that exists. Hopscotch has less feedback because you can hop through it in a pretty ugly fashion, as with stair runs and dancing – but they’re still infinitely better than performing calf raises.

The Proof Is In the Wild

So do calf raises just generate fatigue and trigger points and poor firing? Doesn’t that just cause weakness? Here’s what I think. Calf raises do more harm than good and they don’t transfer to the demands of sport. The proof is in the wild: long tendons supported by reactively bracing calf muscles exist in the best running and jumping animals and humans.

We can’t change our tendon length, but we can improve the reactive bracing behavior of our calves through integrated exercises like those above. But before y’all get out your shotguns for blasphemy, there is a place for them. When you’ve had a calf or lower leg injury, the area of the brain responsible for organizing nerve signals to the calf can suddenly go quiet and shrink in activity. Doing good old calf raises can reorganize this part of your brain, restoring nerve activity and the number of nerves involved.

Beyond that, isolated calf training fails the litmus test for an effective exercise for running and jumping sports.