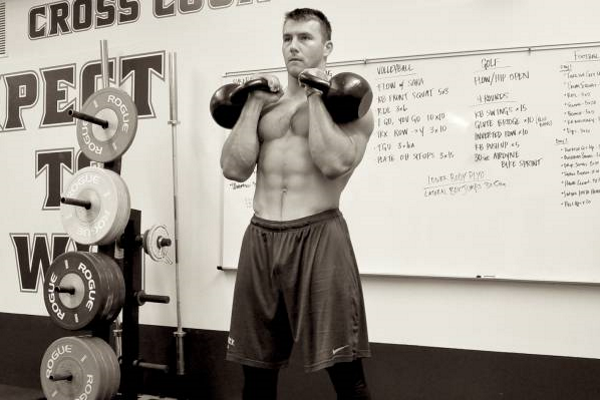 No title of a workout has ever lived up to its name like this one. I’ve come up with dozens of routines: Hells Bells, FML, and Helter Skelter to name a few. The former athletes of mine who are reading this right now will feel a cold chill run up their spine just hearing those names. But nothing has had more impact than my beloved Chain of Pain.

In February of 2006 I took the job of San Jose State football strength coach. The team had been marred with mediocre outcomes for decades and was searching for an identity. Dick Tomey had taken the job in 2005 and was starting the epic turnaround for the Spartans.

Walking into the position, I knew we needed to develop a program that would facilitate the usual needs of a Division I football program. But we also needed something extra that would take a group of relatively undisciplined kids and help galvanize them through hard work. Since I was a kettlebell guy, I intended to create a gruesome program that would leave a standing mark on the team.

There aren’t many kettlebell workouts more gruesome than the Chain of Pain.

The Chain of Pain is a series of double kettlebell exercises that transition from one move to the next, creating the “chain.” The idea is to layer in volume progressively over a series of weeks. In the end, the idea is to have a long chain. Since 2006, we have introduced this workout to a multitude of teams (especially those who need a kick in the ass).

The entry-level program has a few requirements:

The Chain of Pain

The first week of the chain is:

In that order. That is your first rep. You would immediately enter into your second rep by going directly back to swings after the last set’s press.

A set is 10 total reps. We introduced this to football players, so we operate from the idea of four quarters (or 4 sets of 10 reps).

A second week would evolve to:

The second swing after the snatch builds the next link to the chain. Feel free to set the chain up in any order you wish. Simply make sure that one exercise flows smoothly into the next.

In the summer I introduced the Chain of Pain, we finished on a chain of 10 links:

Altogether this equals 1 repetition. There are 10 reps per set (for a total of 10 trips through the above sequence for a single set). And there are 4 sets of these 10 reps. I participated in this with them, and I can tell you, you basically go numb.

Because this is for an intermediate to advanced kettlebell trainee, the weight standard is not for the faint of heart. For men, the minimum standard is a pair of 16kg bells. If you can’t snatch or press a 16kg bell for at least 10 repetitions, find a different program. Ladies, your entry level pair of bells must be 12kg. Same as the guys – if you can’t snatch and press them for 10 reps, I’m sorry, but this is not for you.

As I stated earlier, this is blindingly fatiguing, so we allow a 1:4 work-to-rest ratio for pacing. You must have at least one partner because you will lose count or lose your pattern. You need a person to not only count your reps for you, but also cue the exercises as they come. When I work with athletes, we put them in groups of four – one person working, one person counting and cueing (who is on deck for their turn), and two people recovering.

There aren’t many kettlebell workouts more gruesome than the Chain of Pain.

The Cueing is Critical

When you cue this routine, you need to be on pace with the person working. As they complete an exercise, loudly say the next movement. For example, if we were on week one (swing-snatch-clean-press), the moment the hips engage in the swing, you say the word “SNATCH” to allow a short time to process the next movement. This will continue for every movement.

What Happens When No One Cues?

My first story justifies the need for a designated person to count and cue. It’s not one I’m proud of, but it should paint the picture as to why that person is necessary. I was working in a group of kids who included our starting tailback, Patrick Perry. Patrick is one of the most likable guys you would ever meet.

It was my turn and I was around seven links in. I was in my third round and starting to hate my life. See, the forearm burn is one of the worst things about the chain, and to be honest, I have a major block when my forearms light up. I can run till I puke, squat till I black out, and jump until my legs won’t work anymore. But the second lactic acid hits my forearms, I become the biggest pansy you’ve ever seen.

“The former athletes of mine who are reading this right now will feel a cold chill run up their spine just hearing those names. But nothing has had more impact than my beloved Chain of Pain.”

Anyhow, I was in hell and the forearms were trashed. I was midway through my third set and Patrick’s voice disappeared. I looked over at Pat to see him chatting it up with one of his teammates. In the most hate-filled shrill, I barked “WHERE THE F@#$ AM I?!” He got me back on track and then received one the meanest tongue lashings I’ve given to any human being.

The next story is about one of the most incredible feats of strength I have ever seen. The San Francisco 49ers trained with us over the summer, and I had the unique opportunity to train Jeff Ulbrich. At the time, he was starting at the linebacker position and was an absolute anomaly. James Jones, current Packers wideout, was a senior for me at SJSU. They ended up in the group together.

The banter began immediately, with each guy trying to one up the other. By the fourth set, they performed the whole ten-link chain with a pair of 28kg kettlebells. The entire room of about fifty people was jumping around, hooting and hollering. That one moment would set the stage for success late in the season. We finished the year 9-4, got invited to a bowl game for the first time in seventeen years, and won.

During that season, I got a call from Jeff. He said he had a gift for me. It was a piece of his shoulder pads. On either shoulder there is a shell used for contact with considerable padding underneath it. The shells are made of heavy plastic and nearly impossible to break, but this one looked like someone had taken a sledgehammer to it and turned it inside out. On it there was an inscription that read.