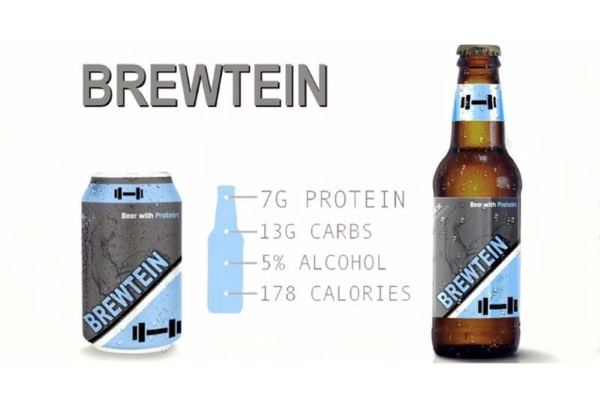 Typically drinking a six-pack of beer doesn’t lead to six-pack abs, but one man is hoping to change that. Meet Blake Konrardy, a beer lover, workout enthusiast, and big dreamer. He is attempting to launch a line of “fitness beers.” According to Konrardy’s Kickstarter page, he is raising money to make two protein-fortified beers, known as Brewtein and and NutriBeer respectively, through his company Supplemental Brewing.

Brewtein — which come with seven grams of whey protein — has “greater protein content than any other beer in existence.” It is an American wheat ale and is five percent alcohol by volume. NutriBeer, which is a light lager, is a “low carb beer” made for those seeking to limit their calorie intake. It features four grams of protein and is four percent alcohol by volume.

Konrardy — who quit his job at an insurance company to focus on protein beer making — tells Munchies that he was inspired to make the beer because he would frequently go to the gym after work before meeting up with friends for drinks. When he would get to the bar, he found himself often “double fisting” a protein shake and a beer, so he decided to find a way to combine them instead. Konrardy has big plans for Supplemental Brewing. He wants to open his own “protein focused brew-pub,” where he serves his protein beers and dishes like a low-carb Mexican pizza made with a chicken crust.

Still, he is a long way off from his chicken-crusted high-protein dreams. Konrardy must first raise $40,000 in the next 32 days, and so far the campaign has only received $5,055 of its goal. This comes as a total surprise considering the ridiculous perks contributors will receive for donating like a gym bag that “conveniently doubles as a six-pack carrier to show you are equally serious about your weekend” as you are your workout. Other perks include Brewtein workout tanks and a “Beerbell,” which is the three pound dumbbell beer koozie you never knew you needed (pictured above). Check out a video about the project below: