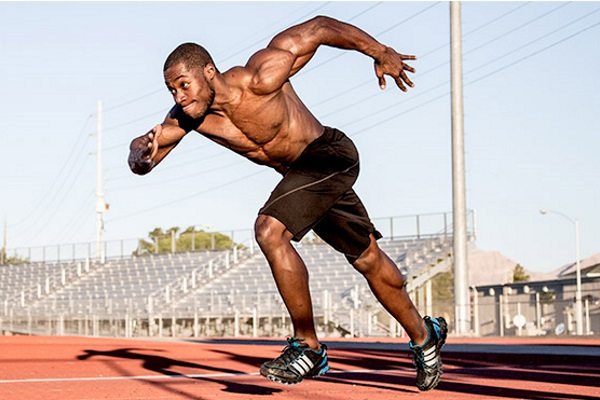 If you’re looking for a way to burn more calories in less time with cardio exercise, then you should take a look at the research that sports scientists at the University of Toledo published in 2008 in the Journal of Electroymyography and Kinesiology. The researchers show that moderate intensity exertion burns more calories when done after high intensity exercise.

The subjects worked through 4 different sessions – A, B, C and D. Each session started with a cardio set of moderate exertion for several minutes [first bout]. After that each session was different.

Session B was similar to session A, but the resting period between the 6 minute-sets was reduced to 30 seconds.

In session C the subjects cycled for 4 minutes at high intensity [80 percent of their VO2max], then rested for 6 minutes and ended with 6 minutes’ cycling at moderate intensity.

Session D was similar to session C, but the resting period between the heavy and moderate-intensity sets was 30 seconds.

Results
The figure below shows the amount of oxygen that the test subjects needed for each of the four different protocols to undertake the exertion. As you can see, the intensive exertion raised the energy burned during the moderate exertion. The shorter the resting period, the greater the effect.

Conclusion
Intensive exercise reduces the efficiency with which the body moves at moderate intensity, according to the figure immediately above. The researchers don’t know why this is so. They do know that the efficiency inhibiting effect is bigger, the shorter the resting period after the intensive exertion.

Bear in mind though, that the fat burning effect of training like this in the long term, as you become fitter and build up more condition, probably declines. “An inverse relationship was identified for aerobic capacity (i.e. fitness level) and the change in exercise efficiency following heavy exercise”, the researchers write.