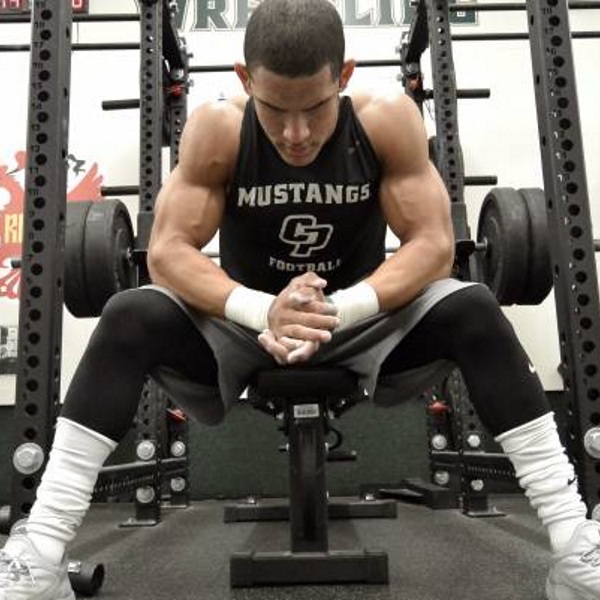 Most college football players are beat up by the end of a long season. The last thing they want to do is show up Monday morning and begin the grind of Combine/Pro Day prep, but that’s the reality of the sport. Every year in March and April, NFL scouts visit almost every college football team for Pro Day.

If you are a high-level player, the post-season adjustment should be easy. But in my fifteen years of coaching, I haven’t worked with one athlete who didn’t need considerable coaching before their testing. The skills you need to master for the Combine tests are very specific. One of those tests is the 225lb rep max on the bench press – and here’s how you smash it.

Prep for the 225lb Bench Test

The guys I work with test their 225lb rep max on day one so we get a read on where we are out of the gate. We won’t revisit the test until the last two weeks before their testing date. I don’t want them to get wrapped into the idea of testing all of the time. We are training for a test, not testing every day.

One of the Combine tests is the 225lb rep max on bench press.

The first training focus should be to get your back as strong as possible. The back is your foundation when you push. It takes the brunt of the load of the bar and creates stability throughout the upper body to protect the shoulders as you push. The shoulder is a dynamic joint that should not take the burden of carrying the stability portion of the lift, therefore, we must assign stability to the back. You need to fall in love with back training. Pull ups, rows, deadlifts – they all need to become a staple in your program for the next few months.

In the winter of 2005/06 I had the pleasure of training defensive end Chris Gocong for his Combine. Chris was a phenom here at Cal Poly. Heading into our training, Chris had a shoulder injury that prevented us from doing any horizontal pressing for the entire 2 1/2 months. We had one bench session heading into his trip to Indianapolis. Our focus was his back and the Olympic lifts.

He planned to simply gut through the 225lb rep test and get what he could get. He hit 31 repetitions, 28 of which counted. Here’s a guy who couldn’t train the movement, yet was able to perform at a high level, strictly because he was diesel strong in his back. He was drafted in the third round by the Eagles.

Use the Clean and Jerk

The Olympic lifts are a godsend for anyone who wants to become powerful. Not only do they develop raw power, but they also teach a person how to generate massive amounts of tension. Gocong lived on cleans and jerks, since vertical pushing did not bug his shoulder. Not only did they radically amplify his ability to jump and sprint, but I attribute much of his pressing ability to them.

Last year I decided to refocus on training the Olympic lifts with my athletes. One of my athletes last year, linebacker Nick Dzubnar, trained with me for his Pro Day. When we started, Nick hit eighteen reps on his 225. After 3 1/2 months of hardcore back training and Olympic lifting, Nick killed his testing day. One of the many highlights was his 29 on his bench test – just a breath away from 30 reps. Nick signed as a free agent with the San Diego Chargers, became a star in the preseason, made the 53-man roster, and is currently a tackling machine for the Bolts.

What About Absolute Strength?

I know what you’ve been thinking: When is he going to talk about bench pressing? Okay, okay. One of the biggest misconceptions about the 225lb rep test prep is that you need to build ridiculous amounts of muscular endurance. But if you can’t hit twenty reps on your 225 right now, you don’t have an endurance problem – you have a strength problem. 100 percent of the people who train with me will spend 80-90 percent of their time working absolute strength. My favorite recipe is five sets of 3, 2, or 1. We bench four days a week.

“Pick a number of repetitions you would love to reach, a number that has been just outside of your grasp, and plow your way. The goal is to hit the target number or die trying.”

I was coaching a wide out named John Broussard my first year at San Jose State, getting him ready for his Pro Day. John was lightning fast. He ran a 4.27, the fastest 40 I’ve ever timed on a Pro Day. But the big knock on him was he was thin. When he started his training with me, he hit 225lb once, which is not totally uncommon for guys in his position group. After only 2 1/2 months of training, John hit twelve reps on his Pro Day, putting to rest whether or not he had the strength to play at that level. John was drafted by the Jaguars in the seventh round that year.

Don’t get completely wrapped up in endurance training, especially with loads sub-225lb. I see guys getting consumed by push up programs or silly burnouts with 135lb. These programs have next to no carry over. Remember, absolute strength plays a much bigger role than you might think.

It is my firm belief that everyone should bench on their test day. Unfortunately some of the more primadonna (yea, I said it) positions like quarterback, wide out, and defensive backs will opt out of testing. Not a good idea. The scouts want to see you perform in everything. Unless you know you are a top-ten guy, you should test. Big men should test no matter what.

The goal is to hit the target number or die trying.

The NFL has clear standards for test time:

These are simple rules, but I would say in all of my years of doing tests, fifty percent of the guys get a no-count on one or more reps for violating the rules at any given Pro Day.

Don’t Overlook the Warm Up

It might sounds basic, but don’t overlook your warm up. My mentor, Mike Kent, is the Head Strength and Conditioning coach at University of Florida. He passed me this bit of genius. Most people don’t warm up correctly. You can find guys doing push ups and a myriad of other nonsense right before they lay down to test. You need to prep the system so you can milk a few more reps.

Our warm up is as follows:

Yes, we take them over the 225lb testing weight to excite the nervous system. Then when they touch 225lb, it feels surprisingly light. The body is prepped and more importantly, the CNS is excited beyond the task at hand, so the athlete can usually hit one or two more reps, simply from warming up correctly.

When All Else Fails, Breathe

When I was playing football, one of my best lifts was the bench. My senior year, I hit 45 reps on the 225lb test. I became skilled at knowing when to pause my motion and take “regrouping breaths” to cheat. I’ve seen multiple people press themselves out, when they could have done four or five more reps had they taken small breaks to breathe and gather themselves.

In every high-volume set, there comes a point when you feel the weight get considerably heavier. Typically when this happens, you have around three reps left if you keep pushing through. The idea is to stop and breathe for two breaths at this point. Get two more reps, then break to breathe again. Depending where you are, you would hit two more reps, pause and breathe, and finish with a series of one rep, then breathe.

The trick is to know when to start the breathing cycles. Most people begin when they are smoked, but it’s too late by then. You have to calibrate how it feels and know when to begin your pausing. Again, around the “three reps left” mark is the perfect place to cycle.

We coach our athletes to sprint for as long as they can, crushing reps until they hit the breathing cycle. Some guys go too slow in the beginning of the test in an effort to be completely strict with reps, which gasses them earlier than they want. Remember, it’s a sprint. Yes, complete your reps with great technique, but do so with your hair on fire.

I am a huge believer in intention. Pick a number of repetitions you would love to reach, a number that has been just outside of your grasp, and plow your way. The goal is to hit the target number or die trying.