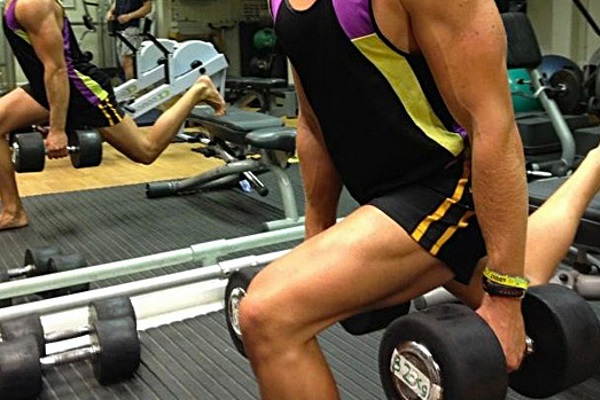 How to Lift Forever
Love lifting? Love playing sports? Then you need to make certain exercises a priority in your training to prevent injury and insure lifelong orthopedic health.

Why? Partly because your posture sucks. You sit a lot and you stare at a lot of screens. The exercises below will straighten you out.

The second problem is the ratio of pulling to pushing exercises. Generally speaking, most lifters push more than they pull, leading to a host of potential problems down the road.

So the first step is to get your training program rebalanced. To do this, use a 2:1 ratio of pulling to pushing exercises.

Once that’s taken care of, use these exercises to keep you in the gym and out of my office for the long haul.

The face pull may be the most versatile loaded training tool in our arsenal for remediating poor shoulder and thoracic positioning. It provides the exact opposite movements that we’re continuously pulled into on a daily basis.

This movement incorporates humeral horizontal abduction and external rotation of the shoulder and retracts the shoulder blades – all helping combat the hunched over, constantly adducted, internally rotated and protracted posture.

If you’re slouching over a phone or computer reading this, that’s the poor position I’m talking about.

Don’t be fooled into thinking the face pull is just another dainty corrective exercise. Sure, it can be programmed into any successful dynamic warm-up or activation technique for prepping the shoulders and rotator cuff, but you can also load this pattern up for a results-producing training effect.

When going heavy, the externally rotated end range position of the shoulder will be largely lost secondary to load, but that’s ok. Pull back hard and hit your posterior shoulder girdle musculature in strength and hypertrophy rep ranges.

As for turning up the metabolic stress in a tissue, extremely high rep ranges with increasing tension will light a fire on those posterior delts.

Exercise #2: Rear-Foot Elevated Split Squat
The rear-foot elevated split squat beats other single-leg training movements. You can load some heavy ass weight up with it, translate the movement into more mobility and stability, and get a downright brutal training effect when executed properly.

Whether this pattern is loaded with a barbell, dumbbells, or body weight only, the internal mechanics of the body do not falter. Quick tutorial from Christian Thibaudeau:

The position through single-leg loading creates a dynamic environment for tapping into the highly plastic strength curves of athletes and lifters. This is even more evident in lifters who have spent a majority of their careers only training the big lifts, which are bilateral.

After years of training bilaterally, lifters will have a tendency to develop a bilateral strength deficit. Strength coach Mike Boyle is largely responsible for popularizing this term to the world of high performance athletic training.

A bilateral deficit is evident when the strength of each leg is separately added together, the potential sum total strength would exceed the numbers of the same movement when executed bilaterally. In this case, the sum can be greater than the whole.

Not only does this movement have the ability to be loaded up, but done so in a safe manner. It actually protects the lower spine.

How? The single leg nature of the movement incorporates a reciprocal pelvic position that deloads the lower spinal segments and helps protect notoriously vulnerable segments from unwanted shear stress.

It also provides some direct dynamic mobility work for the hip flexors of the leg, which is placed in the elevated position. Achieving an extended hip position with a flexed knee puts a nice stretch through the superficial and deep hip flexor groups while challenging this position under stability and strength requisites.

Exercise #3: Loaded Carry
The loaded carry is another class of movement that is absolutely pivotal for every single person on earth to practice and master.

Some think it’s too simple to yield results. Functional training gurus, the kettlebell allegiance, and the powerlifting faithful have all prioritized a popular tool or method above the idea of matching actions with goals that are unique to a lifter. Thus the loaded carry has been vastly overlooked and under-programmed.

But those are the same guys putting their long-term orthopedic health at risk in the all name of cultish training.

It’s no surprise that world class experts have been passionately teaching the loaded carry for years to tap into both a prehabilitation model of the spine and synergistic neuromuscular stability patterns that link up the shoulders, core, and hips.

When executed properly, loaded carries are the ultimate form of core training. There’s a reason why the world authority on spinal health, Dr. Stuart McGill, considers the programming of loaded carries absolutely essential to any training program.

So why does the loaded carry keep you healthy and functioning above all other core specific movements? The phenomenon of what Dr. McGill has coined “super-stiffness” can be explained as a rhythmic and timely firing pattern around a region of joints to maintain an optimal position.

The loaded carry does just that, and then some. Not only are the four layers of the abdominal wall being activated, but also the hip and shoulder complexes that can have the ability manipulate the position of the spine, especially when they become dynamic in nature.

Don’t dismiss the carry as just an optional metabolic finisher. When programmed with parameters of progressive overload, the carry can be advanced to match increasing levels of your skill and strength. 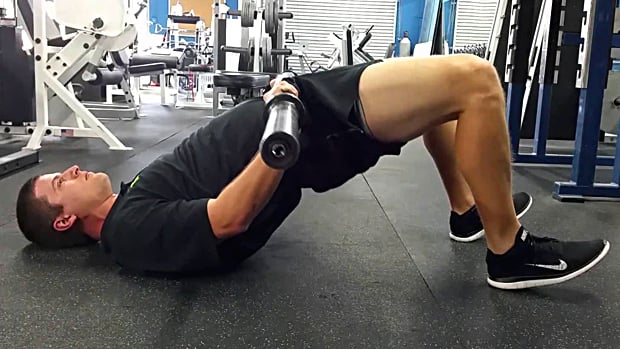 Exercise #4: Glute Bridge
Spinal health is a big deal if you plan on lifting for the rest of your life. And gluteal strength and hypertrophy is important for spinal health.

You can prevent spinal injury through training the lower pillar of your spine in a more concentrated dynamic nature.

From the simplistic supine bodyweight glute bridge to the loaded hip thrust, the popularization of glute training has never been more mainstream.

The largest of the butt muscles, the gluteus maximus, is a highly influential structure with specific attachment points throughout the posterior pelvic girdle that translate into enhancing both posture and stability throughout the lower lumbar segments when properly trained.

The gluteus medius may be equally as important to long-term function, responsible for both lateral hip stability and alignment, especially in single leg stance.

From athletic performance to avoiding hip fractures later on in life, targeting the glutes directly translates into function. Manipulate range of motion, rhythm, and loading variables in training, and the glutes will not only start to fill out a pair of jeans, but also enhance global function in every step of your life.

Stronger glutes can undo the poor postural stresses of daily sitting while also firing up the posterior chain, which most people tend to be less dominant in compared to the anterior chain.

Exercise #5: Squat and Deadlift
First notice that the headline of this section isn’t Barbell Squat and Deadlift. The squat and hip hinge movement patterns are fundamental and have a myriad of progressions and regressions to develop competence in the pattern at many different levels.

I’ve told you before that conventional barbell squats and deadlifts were among the most orthopedically debilitating movements known to man.

It’s true. Popularized cookie-cutter squats and deadlifts pose some of the greatest risks to the orthopedic health of a lifter.

Why? Because progression must be earned.

The dumbbell or kettlebell squat and deadlift allows for this type of recruitment. Simply said, the closer you can place the load to your center of mass in each of these movements, the easier it will be to not look like a flailing fish on the end of a rod.

For advanced lifters, these movements are less dangerous, and actually have some of the highest training ceilings of any movements out there.

The barbell is an advanced loaded variation of both of these fundamental movement patterns. If you’ve devoted focused effort over the course of your career towards perfecting your ability to properly execute the barbell lifts, you understand this concept.

If you don’t “get” that training hard and heavy is something that must be earned, it’s time to be honest with yourself. You can only half-ass your way through the squat and dead with atrocious form for so long.

Whether pretending your way through training sessions leads you down the road to joint-crushing injury, meaningless progressions, or just being looked down upon by real lifters who have put in the work, it’s on you to set your ego aside and go about training in the proper manner.

So where do you turn to if you want to right the ship and actually build a foundation for your training future?

Simplify the load, simplify the movement, and build your skills from the bottom up. Using the bodyweight squat and the hip hinge groove can help in repatterning your movement without having the limiting factor being an external load placed on the body.

There’s no shame in using a movement variation that matches your current skill and strength level. The only shame is becoming complacent at that level and never challenging yourself to become better.

The goal is to be squatting and hinging to some extent forever, just as training and being healthy and functional should be at the top of your priority list for as long as you’re walking this earth.

It’s easy to have tunnel vision and forget about the future, but that effort and work you’re putting into your movement, strength, and optimal functionality while grinding away on a daily basis is what’s going to give you a life with pain-free movement.