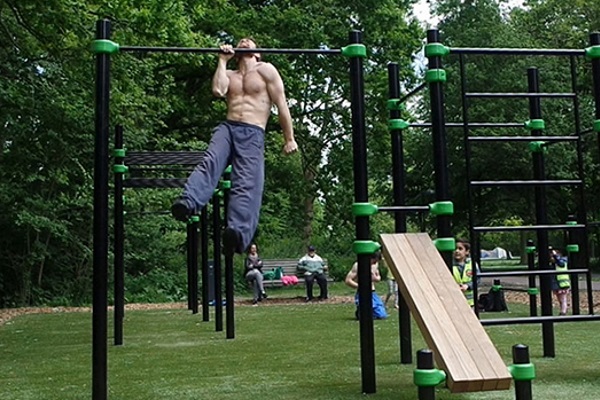 You Have to Want It
The one-arm pull-up (OAPU) is the holy grail of bodyweight strength exercises. It’s a feat that very few accomplish in their lifetime, but that’s mostly because they don’t want it badly enough.

Like all difficult things, you have to set your mind to it. It’s not going to be easy and it might take you a few months. How long it’ll take you to learn depends on the following factors:

Your current level of relative upper body strength matters the most. If you can’t do 10 normal pull-ups, you’re going to have to work all that much harder to do OAPUs.

Simple physics. The more body fat you have, the harder it’ll be to one-arm your carcass to the bar. Drop at least below 13%.

A lot of people tell me that this factor applies to me since I’m a below-the-knee amputee, but before you jump to conclusions, keep in mind that my prosthetic leg weighs the same as a normal leg!

The Basics: 20 Pull-Ups
If your goal is to perform a one-arm pull-up, you should first be able to do 20 conventional pull-ups with perfect form.

Two basic points to keep in mind when doing pull-ups:

Some people take this last bit of advice to extremes. There’s no need to over-retract and depress the hell out of your shoulder blades. Just avoid hanging passively on your ligaments.

Here’s the right way and the wrong way:

Once you can do 20 conventional pull-ups, move on to the following progressions.

Progression #1:  One Arm Dead Hang
A lot of people tell you to start doing weighted pull-ups at this point. Wrong. Opt for specificity instead of intensity.

How long can you hold a one-arm dead hang?

It might sound easy, but most people are surprised when they find out how much they lack in one-arm dead-hang strength.

One of the reasons that one-arm dead hangs are important is that your body tends to twist around your grip during a one-arm pull. You need to practice and attain stability with a hang to make the transition to doing OAPUs a lot easier.

Tip: For stability, extending your free arm away from the body and bracing your core helps control this involuntary twisting movement when you’re hanging from one arm.

Sets and Duration
Start by adding 3 sets of single-arm dead hangs to the end of your workout.

Go easy on the frequency for the first two weeks, otherwise you’ll be flirting with elbow pain before you know it. Ideally, start by doing these twice per week.

After three weeks, progress to three times a week. Your goal is to be able to do at least a 30-second dead hang with each arm.

Don’t worry, improvement comes fast. Continue doing your regular pull-ups during the rest of the week. Do three sets, three times a week.

From a one-arm relaxed passive dead hang, while keeping your elbow locked, elevate yourself by depressing your shoulder blade down and retracting it toward the spine. Your body should elevate a few inches as the scapular retractors and lats contract.

“Put your shoulder blade in your back pocket” is the cue to remember. Your goal is to be able to do three sets of 5 reps with each arm.

As you get closer to doing an OAPU, you’ll face two major challenges:

Fix these sticking points by using an elastic band that applies a resistance that’s about 30-40% of your bodyweight. For example, I weigh 163 pounds and I use a 55-pound resistance band.

Slip the band around your pull-up bar and grab the band with your free hand as close to the bar as possible. Once you can do 3 sets of 8 reps, grip the band 4 or 5 inches lower.

Continue doing this until you can do 3 sets of 8 reps and gripping the band about 20-inches lower – or about the distance of you elbow to the tip of your index finger – from the top position.

Cheat Your Way Through It
Using momentum to get your first OAPU is essential in the beginning.

I’m not a fan of kipping pull-ups, but it’s okay to kip as a beginner and when performing certain new bodyweight exercises, like the OAPU.

Performing a small kipping motion in the bottom position can make getting your first rep easier.

Cheating also employs elastic recoil and stretch reflexes. You need optimum muscle coordination in order to take advantage of all your neuromuscular horsepower, especially in a complex movement like the one-arm pull-up.

Most muscles will fire more efficiently if they’re preloaded into a moderate stretch before contracting. This works quite well for OAPUs.

How to Cheat The Right Way

Conquering the second sticking point takes time and is a matter of practice. For the next few months, start your workout with three sets of OAPU attempts and move on to three sets of band-assisted OAPU’s to build your strength.

Patience You Must Have…
The OAPU is a long-term goal. Find a way to implement it in your program instead of focusing on it exclusively and ignoring the rest of your exercises.

Remember that the OAPU can put a lot of stress on the joints, especially the elbow, so don’t become impatient. Respect your body by always warming up properly and giving it enough time to recover.