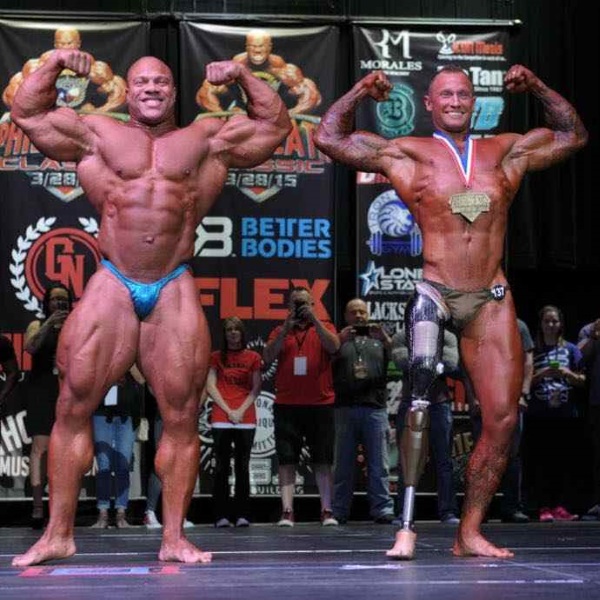 Mark Smith is a former Grenadier Guard who was lucky to survive. Mark, who has served in Bosnia and Iraq, lost his right leg in Canada after an accident during a live ammunition training exercise while preparing for his second tour in Afghanistan. Mark’s leg got battered with bullets and despite 24 operations and 10 weeks in the hospital, medics had no other option but to amputate. Since being discharged from the Grenadier Guards, he had gone on to become a trailblazing bodybuilder.

He has already won a national competition and is now wholly focused on becoming the top disabled competitor in the world.

“I am a British Armed Forces Veteran and served 10 years with the 1st Battalion Grenadier Guards, on Operations in Bosnia, Iraq and Afghanistan and overseas in Jamaica, the Falklands, Kenya and Canada. In 2011, whilst on Pre-deployment training in Canada, to return to Afghanistan, I was involved in a live-firing incident that resulted in me receiving several gun shot wounds to both my right leg and right shoulder.

I was resuscitated on six occasions over the following few days and was on life support. My injuries resulted in my right leg being amputated above the knee and spending 10 weeks in Hospital, having over 20 operations and losing almost 30kg in body weight.

Following two years rehabilitation, learning to walk and run on a prosthetic leg and becoming a qualified football coach, boxing coach and personal trainer, I was medically discharged from the Armed Forces in late 2013. Somewhat lost and not finding personal training as fulfilling as I’d hoped, I began to look for a new path and in May 2014, read a story on Bodybuilding for lads like myself, people with disabilities who could walk/stand on stage.

It appealed to me straight away and I went ahead and entered my first show for the November, giving me a few months to diet and train properly and learn to pose!

It has been an overwhelming first year competing and I was fortunate enough to win my first competition, what followed was amazing: A further 4 wins, 2 second placed finishes, a guest pose at an IFBB Pro Show and competing in Texas and posing on stage with 5 times Mr Olympia, Phil Heath! That opened so many doors for me and led to me featuring in Flex, Muscular Development, Train and Muscle & Fitness magazine!”

“Off stage, I am keen to help our category expand in both numbers and competitions and it has been a great success so far-With an increase from 3 male Bodybuilders in 2014 to potentially 15+ in 2016. We have also gone from 2 shows including the category in 2014, to over 20 this year, including qualifications for two British Finals and a World Finals.

Through bodybuilding, we are being given the opportunity to show what we can do and changing people’s perceptions of disabilities and also of bodybuilding. Showing the huge positive impact it can have on an individual, myself definitely included in that.

We want to continue to progress though and I think through a site like this, we can reach out to so many more people, perhaps those living with disabilities, who may still be unaware this category exists.”