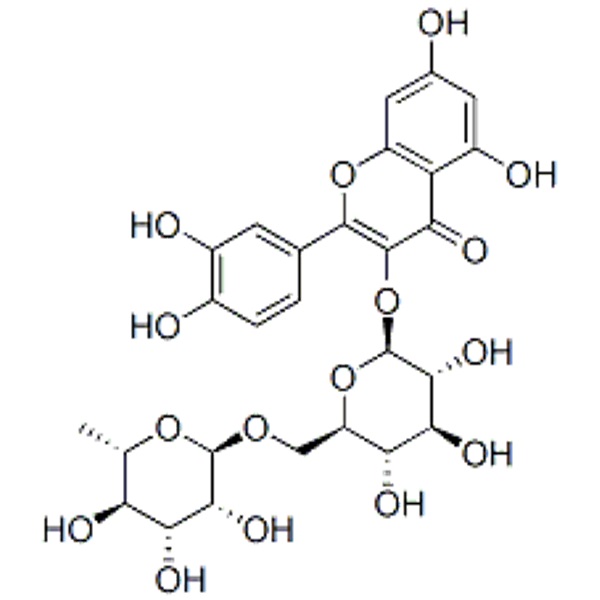 You may have heard of rutin as a compound that protects blood vessels, but according to South Korean researchers the same stuff may offer protection against obesity. A half-gram daily would be enough to reduce the impact of overindulging in calories.

The molecule consists of a quercetin and a rutinoside part, which is why rutin is also known as quercetin-3-rutinoside. Rutin is found in large quantities in foods such as apples, onions, tea, citrus fruits, berries and rhubarb. So healthy foods are full to bursting with rutin. If you eat healthily and are not a coffee junkie, rutin is probably the most prevalent phenol in your diet.

Study
The researchers divided lab rats into three groups. One group was given standard food [Control, NOR], a second group was given food containing extra fat – and therefore also more calories [High fat diet, HFD] and a third group were given a high-fat diet with rutin added to it [HFD + Rutin]. The experiment lasted 12 weeks.

The human equivalent of this dose of rutin, for a person weighing 85 kg, would be about 425 mg per day. This is an acceptable dose: you’ll find cheap supplements containing 0.5 or 1 g rutin in any supplements store.

Rutin improved the rats’ cholesterol balance and lowered the concentration of triglycerides in their blood. That would mean that rutin offers cardiovascular protection.

Mechanism
The Koreans found less mitochondrial DNA in the muscle cells of the rats that had been given high-fat food than in the muscle cells of the control group rats. The excessive amounts of calories led to a decrease in the number of mitochondria. The rutin supplementation negated that effect almost completely, as is shown on the left below. Click on the figures for a larger version.

The calorie-rich diet also led to a decrease in the concentration of the enzyme AMPK. AMPK stimulates insulin sensitivity and the conversion of fat into energy in cells. It can also stimulate cells to start manufacturing more mitochondria. AMPK does this together with key molecules, such as SIRT1, Tfam and PGC-1-alpha. And as you can see, supplementation with rutin activated all these molecules.