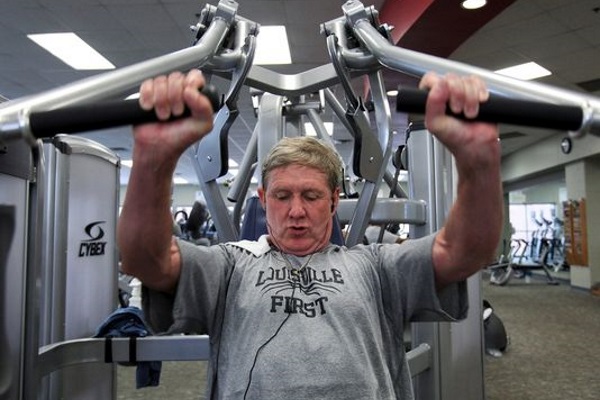 As men age they start to react even less well to synthetic testosterone [structural formula shown below] than endocrinologists thought. According to a study done by the manufacturer of ProStrakan/Fortigel testosterone gel, published in the Journal of Andrology, exogenous testosterone causes a stronger reduction in the body’s own production of testosterone the older you get.

Testosterone
Older men’s bodies (say 50 and up) react more strongly to testosterone than the bodies of younger men. If you give older men testosterone injections, their cholesterol levels get worse than those in younger men. [J Clin Endocrinol Metab. 2005 Feb;90(2):678-88.] What’s more, the concentration of the prostate cancer protein PSA increases more than in young men, and the blood of older men becomes more syrupy as a result of testosterone than the blood of young men. [J Clin Endocrinol Metab. 2008 Mar;93(3):914-9.] As a result, the chance of heart attacks increases. Oh yes, and the positive effects of testosterone, such as muscle build up, are less noticeable in older men than in young men.

In the study, 35 men aged between 22 and 73 with a raised LH level and low testosterone were given Fortigel testosterone gel for two weeks consecutively. Every morning they rubbed 3 g gel, which contained 2 percent testosterone, on their legs. The table below shows that after two weeks the older men had less total free testosterone in their systems than the younger men. That’s logical: the older men get, the more SHBG binding protein they make. SHBG neutralises testosterone.

Nevertheless the older men’s natural production of testosterone suffered more when they used the testosterone gel than that of the younger men. Below you can see the effect of the gel on the LH level, according to age. LH is a hormone from the pituitary that tells the testes to produce testosterone.

It’s pretty clear what that means: give anti-oestrogens to older men who are taking testosterone supplements as well and the problem is solved.

Testosterone gels are not used much in the chemical power sports world. Nevertheless, the findings are also interesting for chemical athletes who use stronger stuff than gels. The study makes it clear that anti-oestrogens are useful to chemical athletes as they get older.