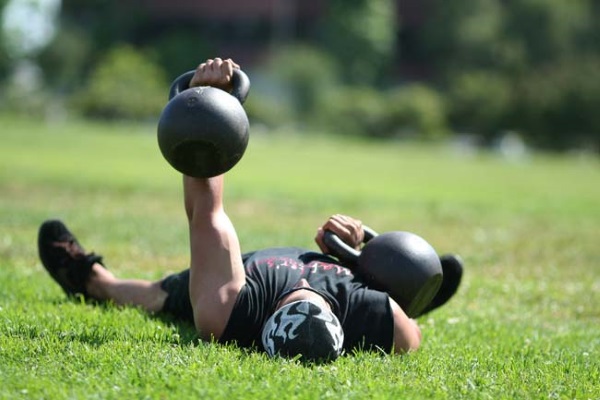 The word girya (kettlebell) was first published in the Russian dictionary in 1704. Back then, kettlebells were used as scale weights to measure goods at the market, but farmers would sometimes swing and press the bells to show off their strength. After a time, kettlebells became commonplace at festivals, fairs, and circuses with various movements and juggling becoming popular acts.

Since those early circus times, competition with kettlebells has continued to evolve, so let’s talk a little walk through history and see how modern-day girevoy sport evolved.

1948 – The All-Soviet Union Competition of Strongman was held in Moscow. Only the champions from each of the fifteen Soviet republics were qualified to attend. Contestants performed the two-kettlebell jerk and single-arm snatch.
1950s – Training with kettlebells gained popularity with youth, farmers, and soldiers. Soviet Olympic weightlifters trained kettlebells unilaterally in order to strengthen their non-dominant side. Kettlebell competitions were held in the form of strongman events, but unlike today’s meets, there were no rules, classification standards, or time limit.
1970s – Kettlebell sport was included in the National Sports Federation as the official sport of the Soviet Union. A commission was created to unify the rules and create sports classifications and a calendar.
1972 – The first official match between republics was held in Skadovsk with teams Krasnoyarsk, Sverdlovsk, Moscow, Perm, Lipetsk, and the Tatar Republic.
1981 – The government decided that kettlebell training would help their economy by creating a more productive, fitter, and healthier workforce. The Official Kettlebell Commission was formed and mandated kettlebell training for all workers.
1985 – The first Soviet Union Championship was held in Lipetsk, along with a chance to qualify for the title of “Master of Sport.”
1988 – Long cycle competition is introduced at the First Cup of Girevoy Sport, along with the ten-minute time limit.
1993 – First World Championship
1999 – Women compete for the first time in the championships
2001 – Women are included in the snatch competition for the first time in the Russian National Championship.

Note: for all single-arm lifts, the athlete can change hands only one time.

Athletes compete in weight categories, and the number of categories will vary depending on the host organization’s ranking tables.

Lifters are given ten minutes to put up as many reps as possible. Each properly executed repetition is accompanied by a signal from the judge. The judge declares the signal as soon as all parts of the competitor’s body are motionless. If the competitor violates any rules of the technical performance, the judge can issue a “no count” or “stop set.”

“Lifters are given ten minutes to put up as many reps as possible. Each properly executed repetition is accompanied by a signal from the judge.”

For example, in the jerk, the “stop” signal is issued whenever the kettlebells are held in a position lower than the hands (i.e. farmer’s carry). A “no count” is declared when there is additional push with the legs or additional press with the arms or when the athlete does not fixate the kettlebell in both starting and overhead positions. In addition, the kettlebell(s) must ascend in a continuous manner without stopping.

For the snatch, the judge will declare “stop” any time the kettlebell touches the platform or the kettlebell is held motionless in a position lower than the hip. A “no count” is issues if there is a press of the kettlebell; an absence of fixation in the overhead position; or the free hand touches any part of the body, platform, kettlebell, working hand, legs, or trunk.

Fulfilling the allotted ten minutes is not necessary in order to win or achieve rank. In fact, it’s common for a lifter to perform a set in less than ten minutes. Various reasons include overtraining, lifting a heavier weight than he or she is accustomed to, or lifting at a faster pace than the one prepared for. With consistent and thorough training, though, the lifter will have the endurance to fulfill the ten minutes and earn a higher result of quality reps.