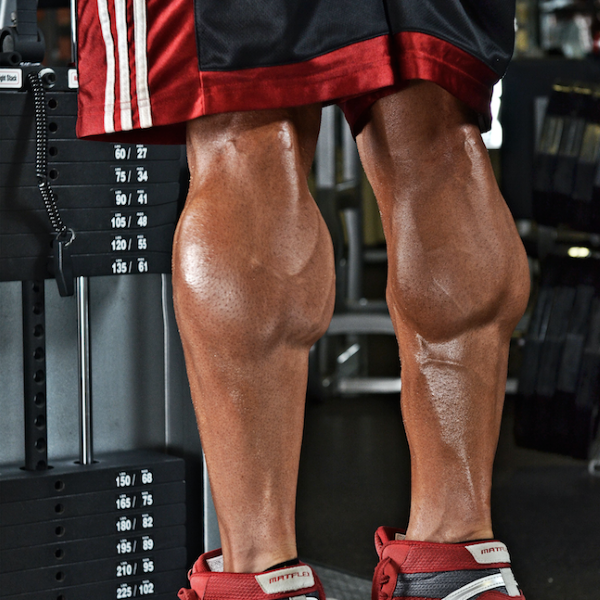 As usual, misinformation on the internet is rampant. If you ask 10 “experts” how to accomplish something, you’ll likely get 10 different answers, eight of which are absurd and lack even a trace of logic. It sometimes seems like the people answering these questions feel they have to come up with a ridiculous response or theory so that they’re remembered or revered. I’m straight forward. I like to not only break things down to a very simple, basic level when I explain things, but as long as I’ve been training and prepping people, I also insist on keeping variables to a minimum. You must be able to accurately gauge whether or not something is working.

Building calf size takes time—a lot of it. Over the years, when asked how long it took me to build my calves, my rehearsed answer was, “I started training them when I needed them to win and I finally got really good calves when it no longer mattered to the judges.”

When a muscle takes a long time to respond, it’s even more difficult to gauge progress along the way. You could waste six months on a method for training calves before you find out that it just isn’t working. I’m here to save you a lot of time and guesswork by giving you four tools—or principles—that will absolutely without a doubt help you grow calf meat. As well as these tools work, it will still take you a long time to get the size you want, but at least you’ll know that the process you’ve chosen will work.

First, know that calves recover relatively quickly. They’re used to walking around every day of your life, so they’re used to high repetition work and a mid-range of motion. What I mean is that when we walk, we don’t stretch the calf much and we don’t squeeze the calf much either. If you pay attention to fat people (and you should because fat people are fun to watch), you’ll notice that rarely will a fatty have a poor pair of calves unless he or she is newly fat. Anyone who has been fat for any length of time has very large, muscular calves. Look at it this way—if a fatty can have great calves, you damn sure can. And for the record, one of the four tools isn’t to become a fatty. Nice try. Here are the four tools that will ensure your calves grow:

Reps are numbers, and the calves (like any other muscle) know whether or not a stimulus will cause change or adaptation. Numbers have little to do with that, so as much as I say don’t count reps, still make sure that you get at least six reps. From there, forget counting. The strategy is simply to tolerate as much pain as your mind can handle. No other muscle that you train will elicit such a hellfire pain as training calves with the intensity needed to go from zero to hero (because working a Vanilla Ice reference into a calf article is proof of my skills). The set stops when you can no longer tolerate the pain. If you’re a bit more nuts than the rest of us, you can always shake out your feet for about five seconds each while still holding the weight on your shoulders and then go right back into another set.

2. Do a Full Stretch and a Full Squeeze

Yes, this one may seem obvious, but for calves, it must be incredibly deliberate. We know to stretch and squeeze for the back and chest, but you can still grow and progress well if you aren’t sticking to this protocol or philosophy 100 percent with other muscle groups. This isn’t so with calves.

You must drive the heels downward at the bottom of the movement, emphasizing the stretch, and then fully squeeze and hold at the top as well. My recommendation is to stop and hold that squeeze so that the movement comes to a complete stop before dropping down for another rep. This hold also goes for the stretched position. Again, going back to the aforementioned fatty, the calf muscle isn’t used to the stretched position under resistance and it isn’t used to the peak contraction either. Therefore, it stands to reason that to show the calf a stimulus it hasn’t seen before, you wouldn’t do only mid-range reps like those skinny-legged kids in the gym who bounce a lot of weight in that mid-range yet can’t figure out why their calves won’t grow.

3. Train Them Without Shoes

I know, I know, I’m a douche bag because I steal ideas from Arnold. However, I still wear socks, so this is completely different or kinda different. OK, it’s the same, but it works very well because shoes basically just get in the way.

In the fully stretched position, a high-top or three-quarters cross trainer type of shoe will bunch up on the front of the ankle. This will give support, making for less stress on the calf in the bottom stretched position. It’s also difficult for the sole of a shoe to not slide, even just a little bit, at some point during the set. When you’re only wearing socks, the ball of your foot will stick like glue to the 100-grit grippy things they use on calf blocks. Your foot shouldn’t slip during the entire set.

Training without shoes is also good for calf growth because it can help to limit the weight you’re using to something that you can handle throughout that much needed range of motion. If the weight is too heavy, it can put too much pressure on the nerves in the ball of the foot. It may become so uncomfortable that you’ll want to quit the set early.

Although the three tools listed above are excellent for calf development, this one particular tool might be a little more important than the others. The gastrocnemius muscle should be trained independently of the soleus, though obviously they’ll both be trained together in varying degrees. You can train the soleus the day after training the gastrocnemius, but I don’t advise doing it the other way around. You’ll get a lot of work out of the soleus muscle during most gastrocnemius movements but nowhere near as much gastrocnemius involvement when doing soleus work. Training these two muscles separately will allow you to bomb each muscle one at a time. With the calves recovering so quickly, you should be able to move up to training the gastrocnemius and soleus two times a week (over four days).

A note about cardio—if you’re doing a lot of cardio that involves the calf muscles (i.e. elliptical, stairs, high-incline treadmill), cut your calf training volume to accommodate for the added calf work from the cardio.

If you put this plan into effect, you’ll find out before long that your calves are growing. Obviously, other variables like your diet and rest need to be in line for full recovery or even the best program won’t do much of anything for you. This is the system that I used to bring up my calves in the late 80s and 90s, and hundreds, if not thousands, of clients have used this system as well with dramatic results over time. Remember, if you aren’t willing to put in the effort and bust your ass on this plan, you can always just become a fatty for five years and then lean down and have huge calves. But I feel that my option might be healthier. Plus, fatties don’t pull much ass. Just sayin’.