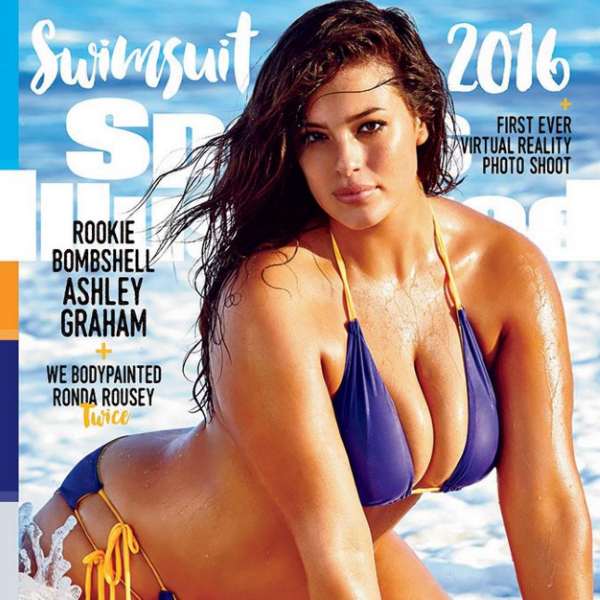 The person that came up with the idea of putting a fatty on the cover of Sports Illustrated is an absolute genius. I am not sure if Sports Illustrated is dealing with declining readership in general or if their swimsuit issue just isn’t what it once was, but you can bet your (fat) ass more people will view this edition than any other swimsuit edition before it. Hell, maybe the person that came up with the idea just likes fat girls. Finally, someone that agrees with me.

Okay, maybe I don’t like FAT girls but the term “fat” is quite subjective. In the world of bodybuilding, figure, and fitness, fat is a term used to explain oneself being only five or ten pounds overweight and is sometimes used for nothing more than to fish for a compliment. I think we have all read posts on social media where a woman says she is soo fat only to see a picture of someone that, at least on the surface, is in great shape. Psychologically? Yeah, not always.

My preference isn’t fat as much as curvy, soft, and not a stick figure. If you have an ass smaller than a nine-year old’s, I have to pass — that doesn’t work for me. Boobs, ass, and some hips and we are in business. However, some people just plain like big girls. In fact, I think the majority of people in this country prefer thicker girls with more curves than the skinny, competitor look that so many people in the industry profess to liking. Last I checked, Sports Illustrated targets the mainstream demographic of this country so the people that make up our industry—and what they like—are certainly in the minority. So, how is it that people in this industry are butt-hurt all over social media about the newest cover girl for the swimsuit edition being fat, with some people actually using the term obese? I am not usually shocked at how people in this industry act, but this one caught me off guard.

First, I wondered why anyone would care. This is a question I have asked myself a lot lately because everyone seems to have an opinion on everything — as if they are the last word or that anyone gives a shit what they think. The irony here is that most of the people calling her fat and chastising her saying she has no business being on the cover of SI have (I will say it) ugly-ass girlfriends or wives, anyway. How is that for judgement? Explain to me how your wife or girlfriend can be ass-ugly and how you have an opinion on someone that you feel isn’t in good enough shape to be on the cover of a magazine? And one more thing: You wouldn’t “hit that”? Your arrogance is laughable. Trust me, she is pulling way hotter male-ass than the likes of you.

Our industry is incredibly judgmental and only masquerades occasionally as supportive or selfless, usually for some sort of personal gain, almost altruistically hedonistic; I will compliment you because you might compliment me back and I really want to look like a good person by complimenting you. However, I don’t fucking mean it.

I didn’t see even one opinion from a woman about the fat girl on the cover, but I would bet any one of my kids that some women feel the same way. I would even go so far as to say that there are plenty of women that, whether they said it or not, have thought to themselves: I should be on the cover, not her. Yeah, except she is pretty and likely has less baggage. #sorrynotsorry. Way too many people think way too highly of themselves. You work out—great—that doesn’t make you hot to everyone. #sorrynotsorryagain.

For some reason, people who are in shape tend to want to portray fat girls as having issues of insecurity. After spending so much time in this sport (loosely defined term) or industry, I have to laugh at this. The girls that are bigger tend to be way more comfortable in their skin than those that obsess over their appearance. Plus, a girl who might have a beer or a burger is a lot more fun and smells better than “broccoli-farts girl” who is constantly in a shitty mood from starving herself and doesn’t drive you nuts with, “Do these shorts make me look fat?” questions. The fat girl won’t ask dumb questions like that because she fucking knows that it isn’t the shorts that make her look fat; it’s her fat that makes her look fat and she is okay with it.

I have said this before and I will say it again: It isn’t that being in shape is a bad thing. It isn’t that taking care of yourself is bad or wanting to be healthy. What is bad is when your personality takes on the belief that you are better than someone else that doesn’t place being in shape as a top priority like you (or I) do. It makes a person ugly. My wife won’t read this, so I can say that she is a fat girl—curvy and thick—and even though she has competed before and been in crazy condition, I absolutely do not prefer that look. The large majority of the population doesn’t, either. If you don’t like fat girls, you get a huge thank you from me and the rest of the fatty-loving world. Now step aside, we appreciate you not being a cock-block. Just sayin’.