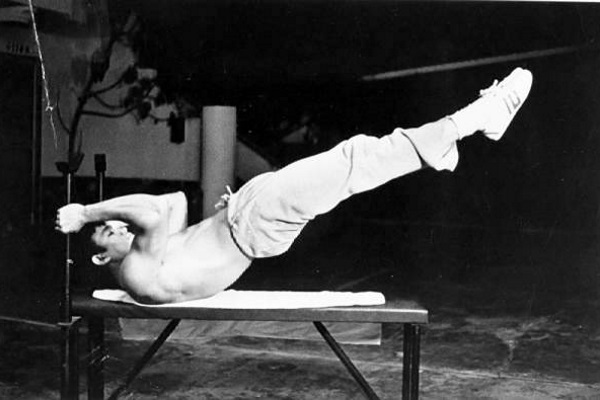 Did you know the dragon flag is named after Bruce Lee? He was often called “the Dragon” and performed this movement where his body hung straight like a flag.

It is a complicated move with many benefits, including teaching the skill of tension needed in many other exercises. This is an advanced movement, but we will cover the progressions leading up to it that can fit most everyone.

Bruce Lee and Sylvester Stallone have both demonstrated this excellent bodyweight movement in films, and while it might seem like something only used for entertainment purposes, the dragon flag is a great test of abdominal strength, similar to the front lever.

“Mastering this skill will help bodyweight movements such as one-arm push ups and front levers.”

Begin the movement on a solid surface where you can grip behind your shoulders. A bench or picnic table would work. We start the movement in the top position, which is the easiest part of the movement. Our weight is in line over our shoulders. The hips and legs are in a straight line. Support your weight on your shoulders – not on your neck. This position is similar to the shoulder stand in yoga.

Next, we lower ourselves down by keeping a tight straight line in the hips and legs. As our bodyweight levers out, the movement becomes more difficult. As we approach bottom, we can then reverse the movement to go back to the top.

Eccentrics
Lowering from the top and holding as tight you can for as long as possible is a great way to build strength for this movement. The eccentric portion allows us to handle more weight as we only have to resist gravity. Concentrate on slowing the movement down even more in the more difficult parts.

Hanging Leg Raises
The optimal movement is to bring your toes to the bar in a strict fashion (no kipping). If you are unable to do the full movement, you can bring the knees up as high as possible.

The dragon flag is a great bodyweight movement that teaches the skill of tension. This skill is not for show only. Mastering this skill will help bodyweight movements such as one-arm push ups and front levers. It will also help you build the tension needed for heavy presses and squats.

Train the dragon flag for quality, not quantity. Your goal is to not sloppily do a bunch in rapid succession. Rather, focus on doing them as tightly as possible. Imagine you are aiming for a perfect score like an Olympic gymnast.

Ready to give it a shot? Make a video of yourself and post it in the comments!