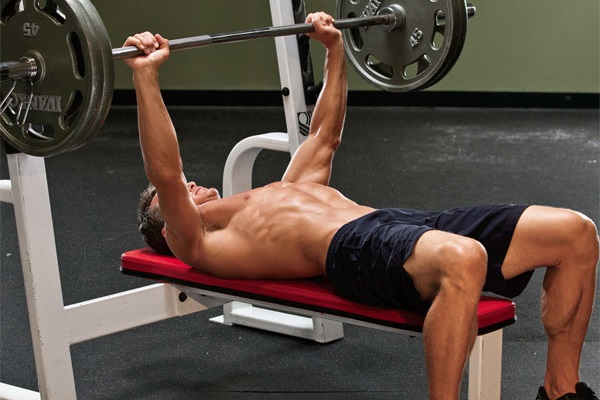 Athletes that do two months of weight training, without sticking it out to the last rep in their sets, make just as much progress as the athletes that do all their reps. At least, this is true for the members of the Spanish national Basque ball team, who took part in an experiment set up by sports scientists at the Studies, Research and Sport Medicine Center in Navarra.

The researchers got their subjects to train twice a week in a gym for 11 weeks. Each training session lasted about three-quarters of an hour. The athletes trained their main muscle groups, doing bench-press, shoulder-press, lat pull-downs, squats, leg-extensions, leg-curls and crunches. In addition the athletes ran for half an hour every week, and did their regular training sessions.

Fourteen Basque ball players trained to failure [RF], doing as many reps as they could in their sets. Fifteen other test subjects trained, but not so fanatically [NRF].

The subjects trained using weights for which they could just manage 8-10 reps. The RF group made sure they did all the reps; the NRF group only did 5 reps with the same weights.

From week 11 to 16 both groups followed an identical programme. They trained using 85-90 percent of the weight at which they could just manage 1 rep [their 1RM], and did 2-4 reps.

The figure below shows how many kilograms the test subjects could lift for just one rep of a bench press. In the second you figure you can see how many reps the athletes managed in one set when they did bench presses at 75 percent of their 1RM.

There was no difference in effectiveness between the RF and the NRF schedules.

The researchers also measured the hormone levels in the athletes’ blood. They detected no differences between the two groups – the testosterone, cortisol and IGF-1 levels reacted in the same way in the RF and the NRF groups. The athletes in the RF group did produce more IGFBP-3, the ‘good’ binding protein for IGF-1. The IGF-1 in the blood becomes more active the more there is of it attached to IGFBP-3 and the less to IGFBP-1.

Coaches and strength athletes regard to-failure strength training as an effective way to ensure progress, as long as you use it sensibly. This study does nothing to alter that, although it does show that you can also become stronger even if you don’t train to failure.

An interesting detail: both groups developed hardly any muscle mass. The RF group gained less than 4 ounces of lean body mass, the NRF group about 2 ounces. That’s very little for a period of 16 weeks’ training. You might wonder whether the athletes in both groups, who also did their daily Basque ball training routines, weren’t over-trained. Or perhaps they just weren’t interested in strength training.