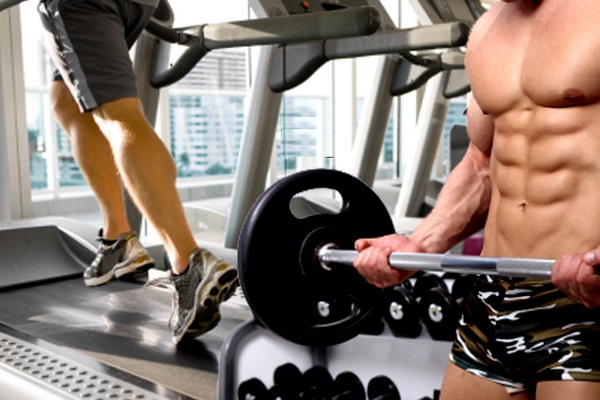 If you do weight training and cardio, you probably do your cardio after the weight training. This order of doing things is beneficial, as this way round the cardio training won’t sap your energy for pumping iron. But according to a human study done by sports scientists at the University of Tsukuba, and published in Medicine and Science in Sports and Exercise, this order is also good for your cardio training as you burn more fat during the cardio part of your training.

The researchers did a trial with 10 healthy male students, average age 23. On one occasion the students had to cycle for 60 minutes at 50 percent of their VO2max. [E] That’s a bit more intensive than just pedalling along, but where you’re still capable of discussing your relationship problems.

On another occasion the test subjects did weight training before cycling. They did 3-4 sets of the shoulder press, butterfly, biceps curl, squat, bench press and lat pulldown, using weights at which they were just capable of doing 10 reps. After this they rested 20 minutes [RE20] and on another occasion they rested 120 minutes before they started their cardio workout [RE120].

To cut a long story short, the subjects lost more fat on the RE20 combination than on the E and RE120.

This is probably because adrenalin and noradrenalin are released during weight training, the researchers think. These stimulating hormones force the fat cells to release their contents into the bloodstream.