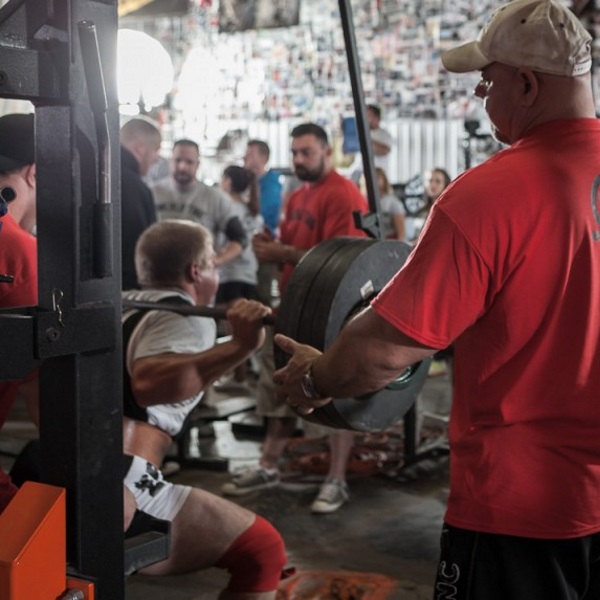 I spend a lot of time thinking about how I achieved the level in lifting that I did. I’m fascinated that people have such great respect for the things I’ve accomplished in lifting. For me, these thoughts are conundrums that I can’t completely wrap my mind around. Out of all the people I started powerlifting with, why was I the only one to reach the highest level? Why do people have such great respect for things I’ve done when they could’ve achieved the same things for themselves? Was I able to do these things and reach the level that I did simply because I believed? Belief was definitely a big part of it, but this leaves me wondering whether or not other lifters don’t achieve this level because they don’t believe.

How does someone who always felt like the underdog his entire life reach such a high level? I was born severely pigeon toed and had to wear orthopedic shoes until I was in middle school. By the time I could walk, I had to wear those same shoes to bed, and my father attached a bar to them, which kept my feet apart and straight. I had to crawl around the house in the morning until my father got up because neither I nor my brother was able to take the bar off. I think it was being pigeon toed and having to wear those damn shoes that made me so slow. Sitting around in a group of kids and hearing the word ‘tag’ made me feel like throwing up. At least hide and seek gave me some kind of chance. I was also always picked last for sports because I was so slow. It sucked! But thanks to lifting, plyometrics and all my other training, I changed that.

By the time I was a junior in high school, I had a reputation for being the fast, huge guy (I wasn’t really that huge at 240–270 pounds). A couple times the underclassmen wanted to test that reputation. Those smart asses would smack me on the back when I was sitting and then run away. Just to prove my speed, I chased them down and gave them just enough of a shove to make them face plant on the ground or floor. Shortly after that, I had to deal with chronic compartment syndrome in my lower legs. This became one of the reasons why I quit football. It followed me into college and ended my ability to keep throwing. Luckily, I was able to keep lifting, but even by the time I had found powerlifting some seven years later, I didn’t just rocket to the top levels (I was also battling increasingly severe sleep issues and depression, which I now know was bipolar disorder). I had to scrape and claw my way to the top. I’ve never had amazing genetics, and I was never a natural athlete. I worked my ass off for every inch and every pound. It’s because of all this that I’m confused as to why I was the only one of a huge group to reach the strongest in the world. If I could make it to that level, so could most of the population.

During the time I started powerlifting, tons of lifters were getting into the sport in Nevada and California. I saw many of these same lifters and teams at every meet. Many of them became my friends. At my first seminar held in California and sponsored by elitefts™, there must have been around 40 lifters. Many of these lifters talked about wanting to dedicate themselves to lifting and they wanted to be the best or break records. Many of them did actually dedicate themselves to lifting for some time, but they still didn’t make it to the top level. Why where there so few who achieved a high level in powerlifting, and why was I the only one from this area to compete with the best of the best? All the lifters at that seminar or even at other seminars received the same information that I did. I was always willing to teach and help other lifters, especially for the lifters and gyms that helped me out when I first started competing. The information I started with is now accessible to all lifters through the internet. So why are there still so few top level lifters?

There are so many different reasons why I achieved success in this sport and why so many others didn’t—heart, dedication, sacrifice, knowledge, attention to detail, and so on. Recently, I wondered if it isn’t because of the simple fact that I believed in myself and the things that I did. I think this is a very powerful thing that often gets overlooked.

A few Saturdays ago I attended a seminar with Dan Green. I found it very informative, and even after all my years in this sport, I learned some new things that I’m excited to try. On the following Monday, I was in the gym and I saw a few of the lifters who had attended the seminar. To my great irritation, they were doing nothing that they had learned in the seminar. Throughout my career, I’ve seen this over and over, but it still frustrates me to no end. I had to say something to one of the lifters, who is also a friend. The answers I got just frustrated me even more. It started with “Oh, that doesn’t work for me” and got worse from there. I just don’t get it, so I proceeded to blow his shitty logic to bits. After awhile, the lifter just stopped arguing with me and admitted that he didn’t have a good reason for not trying what we had learned.

This got me thinking about my first seminar with Dave. I left there believing in the technique that Dave had taught me and the programming he had showed me. I believed in it so much that I thanked him at the end of the seminar. I also told him that he had made one mistake. He asked what it was and I replied, “Now I know what you know, and I’m going to beat your total!” I wholeheartedly believed this, and I did end up beating his total!

Even the best program in the world won’t work to its potential if the lifter doesn’t believe in it. This is something that I see all the time. Lifters read a new program and the first thing that they say is, “I’m going to try this for awhile.” Are they going to try it or are they going to use it? Trying it for awhile? That usually means for a few weeks and then, if they haven’t made huge gains, they stop. Just saying “try it” shows me that there isn’t any belief in it. If it truly made sense to them, they would dedicate themselves to using the program. Lifters who don’t believe in a program are too quick to blame the program and stop using it.

Shortly after starting the programming from the seminar, I had trouble, but I didn’t automatically quit the program. I remembered how it made sense to me and the logic behind it. I remembered the faith I had in Dave’s knowledge. I asked myself, “Could I be doing something wrong or what did I possibly misunderstand about what Dave taught me?” I believed in it and I wasn’t going to just quit at the first sign of difficulty. I started asking questions and talking to my training partners about it. I even ended up calling Dave to get his thoughts. Lifting is a commitment, and training programs aren’t any different. You have to believe in the programming that you’re doing or there isn’t any sense in even doing it. You also have to believe in your own abilities to modify that program to meet your individual needs. The goal is to eventually have the knowledge and belief in your own abilities to program yourself.

You also need the same belief in your technique that you have in your programming. I see so many lifters who refuse to change their technique, and if they do, it’s only for a couple weeks before they revert back to their old style. Their excuse is almost always the old standard, “That just doesn’t work for me.” I was an Olympic style squatter when I went to my first elitefts™ seminar. Dave tore up my style and completely changed my technique. I went from ass to floor Olympic squats for 5 X 5 with 545 pounds to not being able to box squat 135 pounds correctly. Lucky for me, I believed in what Dave taught me and trusted that it would in time take me to where I wanted to go. In less than six months, I hit my first 700-pound squat and I never slowed down after that. Again, I went into that seminar seeking information from Dave, who I had researched beforehand. It wasn’t some random idea to attend his seminar. I choose elitefts™ and Dave Tate based on what I had learned about him and the things he had accomplished. Then I found the seminar closest to me that he was hosting. This was all a strategic plan to make myself better and meet my long-term goals.

When it comes to success, believing is essential, but knowledge is also essential. I’m not saying that all you have to do is believe. If you have lousy technique and a terrible program, believing still won’t get you to your highest potential. Having the perfect program and perfect technique without believing in both also won’t get you to your highest potential. You still have to learn good programming and technique, but you must truly believe in it. For this reason, I believe in learning from people you believe in. Use programs and technique that make sense to you and that you can believe in. All top athletes do different things, but they all believe in what they’re doing. So my question to you is, do you believe?