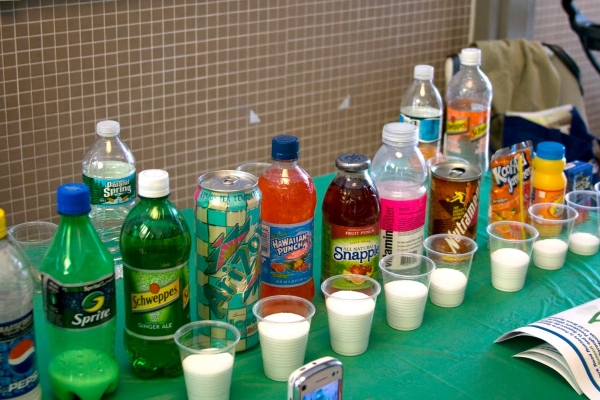 Drinking sugar-sweetened beverages can suppress the hormone cortisol and stress responses in the brain, but diet beverages sweetened with aspartame do not have the same effect, according to a new study published in the Endocrine Society’s Journal of Clinical Endocrinology & Metabolism.

“This is the first evidence that high sugar — but not aspartame — consumption may relieve stress in humans,” said one of the study’s authors, Kevin D. Laugero, PhD, of the University of California, Davis, and the U.S. Department of Agriculture’s Agricultural Research Service. “The concern is psychological or emotional stress could trigger the habitual overconsumption of sugar and amplify sugar’s detrimental health effects, including obesity.”

About 35 percent of adults and nearly 17 percent of children nationwide are obese, according to the Society’s Endocrine Facts & Figures report. Sugary drinks such as soda and juice have been linked to this problem. Half of the U.S. population consumes sugar-sweetened drinks on any given day, according to the U.S. Centers for Disease Control and Prevention.

For 3.5 days prior to and after the study, the women consumed a standardized low-sugar diet and stayed at the UC Davis Clinical and Translational Science Center’s Clinical Research Center.
Before and after the 12-day experimental period, the women underwent functional MRI screenings after performing math tests to gauge the brain’s stress response. The participants also provided saliva samples to measure levels of cortisol — a hormone made by the adrenal glands that is essential for the body’s response to stress.

The hippocampus typically is less active when the body is under stress. When the study participants drank sugar-sweetened beverages, this response was inhibited. The findings offer new clues that help explain how sugar positively reinforces the temptation to eat comfort food when a person is stressed, Laugero said.

“The results suggest differences in dietary habits may explain why some people underreact to stressful situations and others overreact,” he said. “Although it may be tempting to suppress feelings of stress, a normal reaction to stress is important to good health. Research has linked over- and under-reactivity in neural and endocrine stress systems to poor mental and physical health.”

Story Source:
The above story is based on materials provided by Endocrine Society. Note: Materials may be edited for content and length.