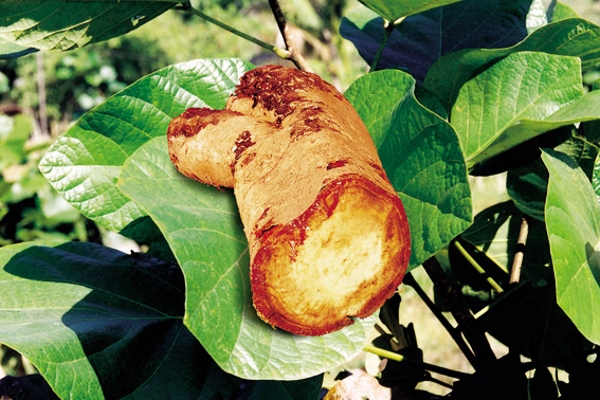 From Ergo Log
A supplement containing Butea superba not only sent a 35-year-old man’s libido through the roof, but sent his levels of the androgen hormone DHT sky high. Thai nutritionists described the case in the Indian Journal of Endocrinology and Metabolism – and may well have finally succeeded in throwing light on how Butea superba works.

Butea superba
Butea superbais a climbing plant found in the jungles of Thailand. Local herbalists use an extract from the dried roots [see below] for a medicine against impotency. Manufacturers of sex supplements containing Butea superbaare common in Pacific rim countries, but Butea superbais starting to become popular in the Western hemisphere too.

How Butea superba works exactly is not known. One theory is that the phenols in Butea superba inhibit the enzyme Rho-kinase 2, and thus indirectly cause the amount of nitrogen monoxide in the blood vessels to rise. [J Ethnopharmacol. 2012 Dec 18;144(3):483-9.] Some supplements manufacturers take this theory so seriously that they add extracts of Butea superba to their NO boosters.

Case
In 2012 nutritionists at Mahidol University in Thailand published a case study about a 35-year-old man who complained that his sexual interest had increased alarmingly. [Indian J Endocrinol Metab. 2012 May;16(3):485-6.]

The man had been taking a capsule containing a locally-produced Butea superba extract daily for a couple of weeks. Exact quantities are not mentioned in the report. The man had started taking the supplement because he was afraid he was losing his hair.

In Asian countries men and women sometimes use extracts of Butea monosperma and Butea parviflora to counteract baldness, but the man had mistakenly thought that Butea superba would have the same effect. Instead of this, however, the supplement he used had increased the amount of testosterone that was converted into DHT.

DHT has more affinity with the androgen receptor than testosterone does. The researchers suspect that the increase in DHT concentration explained the man’s out-of-control libido. They suggested the man stop taking the supplement.

Conclusion
Ergonauts thinking of experimenting with Butea superba would do well to read up first on the side effects of this herb. High doses – 16 g or more – of Butea superba can damage your genes. [Biosci Biotechnol Biochem. 2010;74(5):923-7.]