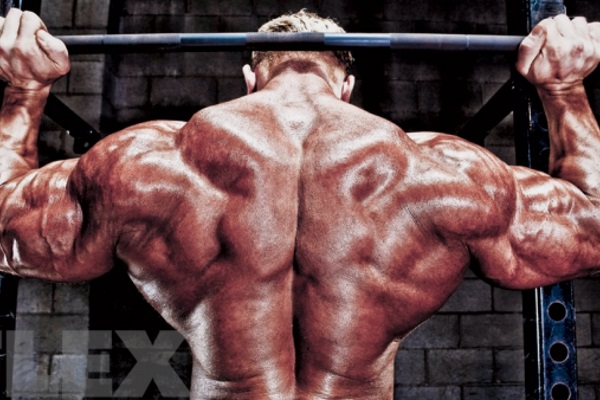 You can never be too wide—not when it comes to your shoulders and back. As we count down Wolf’s six recommendations for widening, we also journey six steps backward through his remarkable career to see just how far his vast wings have carried him. As Wolf proves, width rules.

First, the bad news. Or the good news, if you happen to be a Wolf born in Kyrgyzstan. The most important component in shoulder width is clavicle length, and there’s nothing you can do to alter this. Sufficient calcium and vitamin D will allow you to fulfill your bone-growth potential, but that potential is determined by your DNA. No amount of milk or shoulder stretching is going to give Phil Heath the clavicles of Dennis Wolf. Focus instead on the next five widening rules.

If clavicles are the great width determiner you can’t change, the most important breadth component you can alter is your medial deltoids. Your middle delt heads are like flesh shoulder pads affixed to the outer edges of your skeleton. Prioritize them by hitting them first in your shoulder routine when your strength and energy are highest. “I mix up my exercise order. But when I want to focus more on middle delts, I do them first before I do my presses,” Wolf claims. “That would be my best advice to anyone who wants to get wider shoulders. Make sure you’re doing enough work for middle delts and training them when your strength is at its best.” Don’t be afraid to double up your side lateral work, doing three or four sets of a second exercise in addition to dumbbell laterals. Choices for this exercise include cable laterals, wide-grip upright rows, and peak contraction laterals (focused only on the top portion of the movement).

Throughout his career, Wolf has given his delts their own workouts devoid of any other upper-body exercises. He typically follows his shoulder routine with 12 sets for calves—the body part farthest away. Others may train delts after chest or before biceps and/or triceps. Not Wolf. One day per week is dedicated to dealing with shoulders without any neighboring body parts distracting his focus. “I’ve always liked to give shoulders their own day,” he avers. “Delts are involved with a lot of other things—chest, back, even some triceps exercises—so I want to make sure they have a workout focused only on them. As for traps, I can train them after delts or after back, either way. I switch it up sometimes, depending on when I have the most energy left over.”

Wolf didn’t expand his outer edges by hoisting especially heavy weights. Whether working delts or back, he aims for at least 10 reps every set. “I never got much out of lower reps. I like the 10–12 [rep] range,” he says. “But if I can get more after 12, I’ll keep going.” For the 2014 Arnold Classic champ, it’s all about feeling his muscles stretching and contracting on each rep and maintaining strict form. To avoid cheating, he prefers to do most of his shoulder exercises and at least some of his back exercises seated. Moderate reps, proper technique, and intense focus are the chief ingredients in his recipe for effective workouts.

It’s not enough to merely expand the top of your torso. Bodybuilding is always about creating an illusion. If you have a narrower middle (abdomen and hips), your top (shoulders and upper lats) will appear wider. Furthermore, if you have a broader base (quads), your middle will appear narrower and, in turn, your top will seem wider. Ideally, your physique’s outline should form an X. The owner of one of the best X frames in bodybuilding is the big, bad Wolf.

We’ve already addressed his shoulder training. His upper lats are also superb. On back day, Wolf focuses on the standards: front pulldowns and various types of rows (barbell, one-arm dumbbell, T-bar, and machine). To broaden his quads, he targets his vastus lateralis (outer quads) by cranking out some of his leg presses and hack squats with a narrow stance. You can also point your toes inward on these exercises as well as on leg extensions to place greater tension on the outer edges of your thighs.

We’ve covered the top and bottom of X-frames. The third component is the middle, which is crucial for making the outer edges appear broader. To maintain a slender waist, Wolf avoids direct oblique work. Though he rarely works abs in the off-season, he always keeps his body weight within 15% of his contest target. He knows ballooning his middle would make it very difficult to later regain a tight abdomen.

Wolf’s natural structure also helps his middle management. His lagging lower lats are generally considered a weakness. While it’s true he lacks the sort of floor-sweeping lats that Kai Greene has in spades, this benefits him in some poses. Part of the reason his rear double biceps is so astonishing is because his high lats clear out space so his center is especially svelte. (In contrast, Greene’s ultra-low lats make his waistline appear blockier.) But we’ve talked enough about genetics. Forget your DNA. It was determined before you were born. Instead, go about changing the things you can change maximizing your delt, lat, and outer-quad size and minimizing your middle.