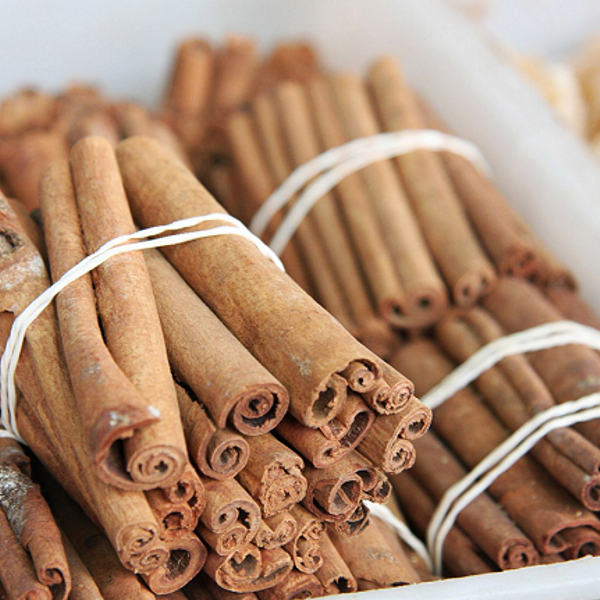 Yes, that’s how real cinnamon look like. It does not grow as powder in plastic boxes on trees as I suspect the members of the generation McBurgerSubway believe 😉
No, this is not absolutely new. In fact this is just “another” SuppVersity articles on the anti-diabetic effects of cinnamon, but I promise it’s going to be the most comprehensive one. One that discusses the currently available evidence from human trials, as well as the things we know and believe to know about how cinnamon acts its anti-diabetic magic qualitatively and quantitatively.

Before I even go into further details, though, I would like to address one of the “cinnamon myths” that says that only the highly expensive Ceylon or Sri Lankan Cinnamon would do the trick, while the commonly sold Cinamon cassia would be useless or even dangerous due to its high (and in fact toxic) coumarin content.

Interestingly, all human studies have been done with the “cheap toxic stuff from the supermarket”. In view of what you are about to learn about its effects on blood glucose later in this article, the first take-home-message from today’s article is thus: “Cheap cinnamon cassia will work just fine as a blood glucose management supplement!” Unfortunately, long-term studies the safety of “common cinnamon” with its highly variable coumarin content (0.31 g = harmless to 6.97 g = potentially dangerous per kg raw powder | Wang. 2013 | see Table 1) are non-existent. 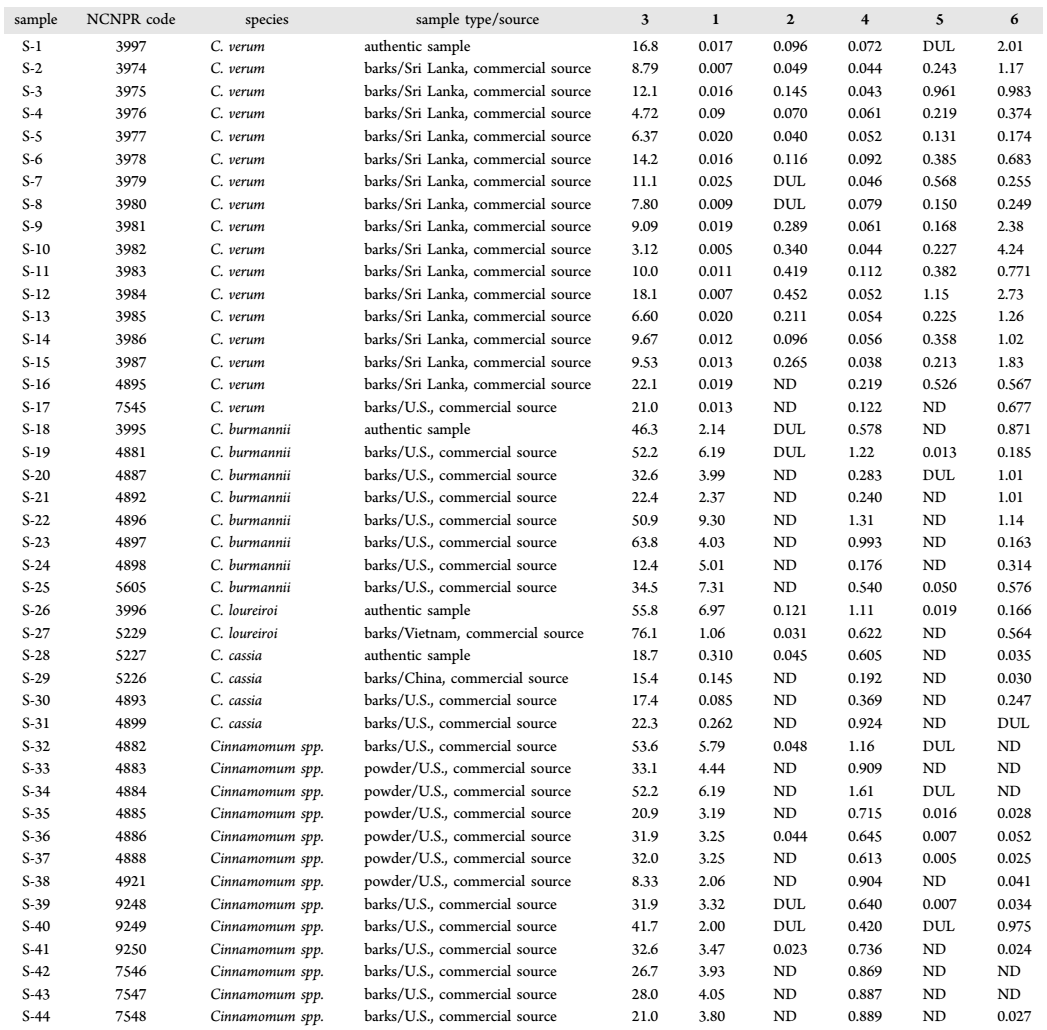 The only advise I can give you is thus to rely on supplements with standardized (low to non-detectable) amounts of this potentially carcinogenic substance (Wang. 2014) if you plan to take it regularly for years. Using the next best cinnamon powder from the supermarket next door on the other hand is probably not advisable even though some of the scientists who conducted the studies Arjuna B. Medagama reviewed for his (or her?) latest paper in Nutrition Journal (Medagama. 2015) probably did just that: Buy cinnamon powder from the supermarket next door to test its effects on blood glucose management in 40-days- to 4-months-studies in cinnamon-naive patients with (pre-)diabetes.

If you take a closer look at the data, though, it becomes obvious that some studies used plain cinnamon powder, while others used regular or commercial water-extracts (CinSulin. Anderson). 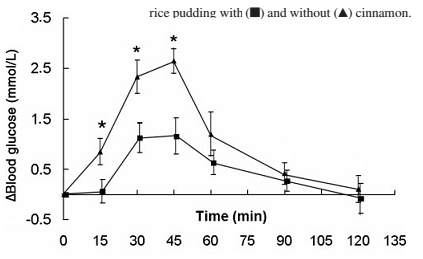 What’s the optimal dosage? Even though the overview in Figure 1 suggests that “more helps more”, Anand, et al. (2010) observed negative effects on the liver of rodents at dosages that would tantamount to ~40g of cinnamon per day. Ok, I assume you already apprehended that this is madness, but in the world of fitness maniacs and mad bodybuilders I thought it would be worth mentioning that even the coumarin free Ceylon cinnamon appears to have ill side effects when it is consumed in extremely high dosages. It would thus appear to be more reasonable to target an intake of 3-6 g of cinnamon with every major meal (it slows down gastric emptying and reduces postprandial blood glucose, therefore it makes sense to take it with a meal | Hlebowicz. 2007, see Figure to the left).

If you scrutinize the results I’ve plotted for you in Figure 1, you will notice that (a) the improvements in fasting blood glucose were significantly more pronounced than those of the long-term blood sugar maker HbA1c, that (b) the former appear to increase with the dosage that was used (Klan and Mang observed the highest reductions and used the highest amounts of cinnamon powder), and that (c) the reductions in HbA1c take time, i.e. several months and are not guaranteed, even if there are significant reductions in fasting blood glucose (cf. Belvins).

On average, the fasting blood glucose levels of the study participants in all studies decreased by 4.7% in four weeks; the HbA1c, on the other hand, by only 1%. Since part of the effects on blood glucose are merely a results of the reduced gastric emptying and will thus affect the peak values, yet not the overall glycemia, it appears logical that the HbA1c reacts slowly to the intervention. As Medagama points out, the effects of cinnamon are yet more far-reaching, so that more pronounced effects on the slow-reacting HbA1c levels can be expected to be seen in the hitherto non-existent long-term (= 1-2 year) studies, because cinnamon will also have …

If that was too much for you to remember, I guess the graphical overview Medagama created may serve as a memory aid, when you come back to this article to refresh your knowledge about cinnamon and pre-diabetes. Speaking of which… 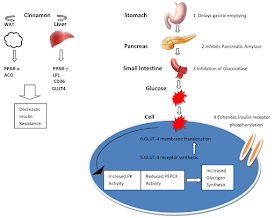 Figure 2: Molecular mechanisms of Cinnamon by which it exerts hypoglycaemic activity. (Medagama. 2015).

So, what’s the verdict about cinnamon and pre-diabetes? As Medagama points out in the conclusion to the previously referenced recently published review, “oth true cinnamon and cassia cinnamon has the potential to lower blood glucose in animal models and humans” (Medagama. 2015). The problem is yet that we do not have reliable long-term safety studies for both, the problematic, potentially coumarin-laden regular cinnamon, as well as the expensive 99% coumarin-free Ceylon cinnamon, which has actually never been tested in human studies (rodent studies suggest that it works at least as well, though).

Addendum: As previously hinted at, there is no evidence from human studies that the “healthier”, “true cinnamon” aka Ceylon cinnamon even works. Well, I just noticed that there’s a single, rarely cited study in healthy individuals from the Lund University in Sweden that says that Ceylon cinammon has no effect whatsoever on glycemia and thus concludes “The Federal Institute for Risk Assessment in Europe has suggested the replacement of C. cassia by C. zeylanicum or the use of aqueous extracts of C. cassia to lower coumarin exposure. However, the positive effects seen with C. cassia in subjects w/ poor glycaemic control would then be lost.” (Wickenberg. 2012)

To recommend regular cinnamon as a standard-supplement, you’d take everyday for years, on the other hand cannot really be recommended – not for pre-diabetics and by no means for healthy, active individuals who have no reason to take supplements with non-muscle specific glucose partitioning effects, anyways. If you want to improve your glucose management folks, work out – a glycogen-depleting strength or HIIT workout, that’s the only scientifically proven muscle specific glucose repartitioner