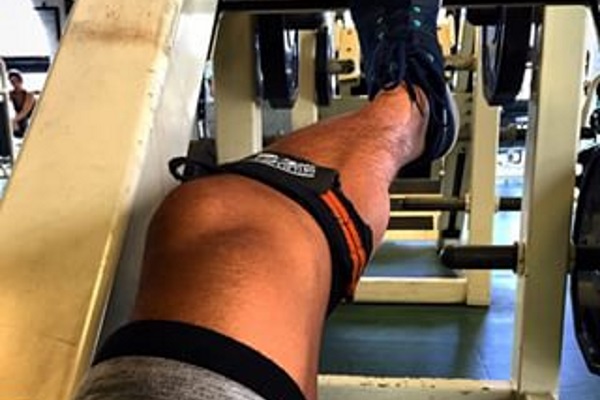 Strength training with relatively light weights results in a big gain in muscle strength if you cut off the blood supply to those muscle groups during your sets. Even the calf muscles, the muscle group that reacts least to training, gain strength more quickly if you restrict the blood supply just above the knee during calf-raises. This is the message of an article that sports scientists from Loughborough University in England have published in the European Journal of Applied Physiology.

It doesn’t matter how you do it: if you deprive your muscles of oxygen during strength training, they’ll grow quicker. Yesterday we wrote about a study which showed that the anabolic hormone stimulus of strength training increases if athletes train in a room with less oxygen in the air. Another research approach is to restrict the blood supply to muscle groups. Human studies show that muscle protein production increases as a result of doing this.

The test subjects trained their calves in a sitting position. They did 3 sets and rested for one minute between sets. Each calf training session lasted 5-8 minutes, during which time the women had a band around their knee to restrict the blood supply. The figure below shows the effect of the training on the 1RM.

After 4 weeks the researchers also measured how quickly the blood circulation recovered after removing the restrictive band above the knee. The circulation returned to normal more quickly as a result of the blood flow restruction strength training.

It’s not yet clear though whether blood flow restruction training is suitable for everyone. The researchers urge caution. “Concern surrounds the fact that the veins are congested and distended and this may cause problems for normal blood flow by causing damage to the valves within the vein”, they write in the conclusion of their article.