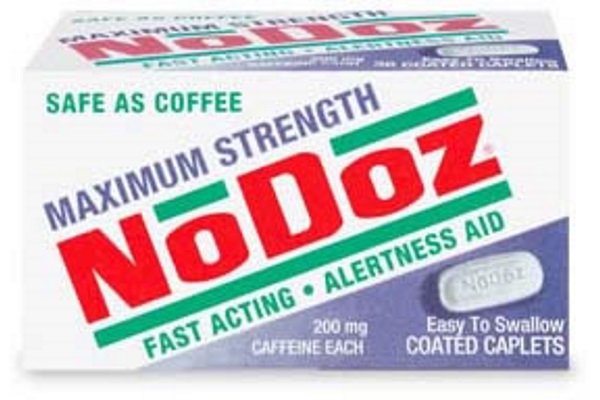 A modest dose of caffeine raises the body’s energy expenditure more than do doses of typical metabolic boosters such as green tea extract or tyrosine. Researchers at the University of Copenhagen published the results of a human study in the European Journal of Clinical Nutrition. A miserable 50 mg caffeine raises the body’s heat production by 6 percent for a period of 4 hours after intake. If you’re almost broke, but still want to use a slimming supplement, now you know what to buy. Ordinary caffeine pills.

Let’s refresh our memory: Caffeine [structural formula at the top here] blocks the adenosine receptors inside and outside cells. Adenosine is a molecule that tells the body to slow down its processes. Caffeine also inhibits the enzyme phosphodiesterase, that breaks down the messenger molecule cAMP. More cAMP means that fat cells listen better to hormones like adrenalin. The cells dump fatty acids in the bloodstream and tissues can then burn these.

The amino acid tyrosine [middle structural formula in the diagram] is found in dairy, meat and fish. It is one of the raw materials found in stimulatory hormones and neurotransmitters such as nor-adrenalin, adrenalin and dopamine. Because the first two hormones extract fatty acids from fat cells, thereby raising the body’s energy expenditure, tyrosine is an obvious ingredient for slimming supplements.

And finally green tea extract – it’s a mix of masses of polyphenols. Some of these, such as EGCG [the bottom structural formula in the diagram], inhibit the enzymes that break down adrenalin and noradrenalin. What’s more, they boost the energy generated by the mitochondria in the cell and the release of fatty acids by fat cells.

The researchers wanted to know which of the three substances works best, so they gave each three separately to 12 healthy, slim men with an average age of 24. Four hours after intake the researchers measured the men’s energy expenditure. Below you can see the effect of 400 mg tyrosine, 500 mg green tea extract and 50 mg caffeine.

During the 4 hour period the men burnt 17 kcal more when they took the caffeine dose. The effects of tyrosine and the green tea extract were not statistically significant.

The researchers performed their measurements in the morning, before the test subjects had eaten breakfast. After the test had been completed, the subjects were given breakfast. Well, lunch really. Then it became clear that the green tea extract and the tyrosine reduced the energy intake by 8 percent. Caffeine reduced intake by 3 percent. None of these effects was statistically significant.

The effect of the green tea extract was disappointing in this study. “In the present study the relative contribution of the specific catechin isomers was not known”, the researchers write about the preparation they used. “This may explain the lack of thermogenic response.”