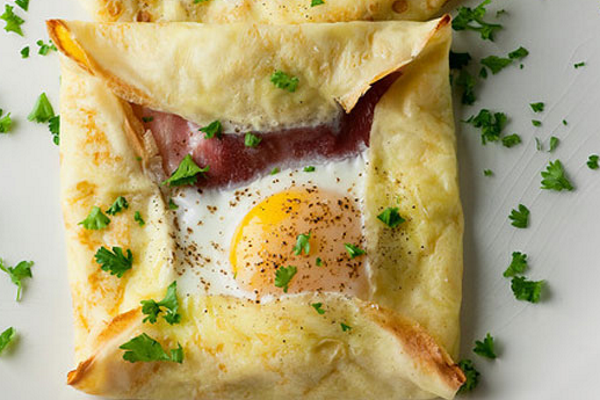 It is almost like the question “to carb” or “not to carb” and the almost religiously maddish discussions between carb-eaters and ketophiles: The debate revolving around the useful- or uselessness of breakfast, when it comes to health and physique issues.

In my more recent articles about the topic I have repeatedly exposed the claim that “not having breakfast is bad for everyone” is total bogus; and while I am not going to go back on that I am about to discuss a study that demonstrates that the right breakfast, i.e. one that’s high in protein, may be extremely better than having no breakfast at all.

Said study has been conducted by scientists from the University of Missouri and the Purdue University (Leidy. 2015). It’s an investigation into the effects of normal-protein (NP) vs. high-protein (HP) breakfast meals on appetite control, food intake, and body composition in “breakfast skipping” young people with overweight/obesity.

As a SuppVersity reader you’ll know that previous studies suggest that as habitual breakfast skippers, the youths are actually not the ideal study object for a study to show beneficial effects of breakfast. After all, a recent study by Thomas et al. showed quite convincingly that “Whether Skipping Breakfast Increases Insulin, Hunger and Blood Lipids Depends on One’s Breakfast Habits” (read the article). Is this a problem? Well, it could be if the new study yielded negative results. After all, we’d have to argue that this was to be expected if the subjects were habitual breakfast skippers.

Table 1: Subject characteristics at baseline (Leidy. 2015). As you can see the subjects were randomly assigned to the three groups at a ratio of 1:2:2 to breakfast skipping, normal protein (NP) and high protein (HP) breakfast.
Luckily, the results were positive and the study with its 12-week study period probably long enough to overcome the effects of habituation which mess with the results of all studies which test the effect of having vs. skipping breakfast on only one or two occasions.

Figure 1: Macronutrient composition (g) of the test meals used in the study (Leidy. 2015)

The study at hand, however, had its fifty-seven adolescent subjects (age: 19 +/- years; BMI: 29.7 +/- 4.6 kg/m²) complete a 12-week randomized controlled trial in which the adolescents consumed either a 1,464 kJ NP breakfast (13 g protein), an isocaloric breakfast with a high protein content (HP | 35 g protein), or continued to skip breakfast (CON). The main outcome variables were the subjects’ pre- and post-study appetite, their food intake, body weight, and body composition, which was assessed assessed via DXA scans (which are as you know still the “gold standard” for measuring the body composition of subjects in scientific studies) 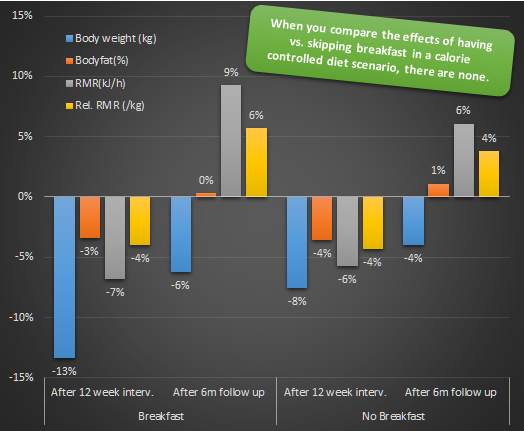 In Schlundt’s 12-week study in which the subjects had to follow the same energy reduced diet pattern one time with, one time without breakfast the marginal differences in weight loss and fat loss (the former favors breakfast, the latter skipping it) were just as statistically non-significant as the other inter-group differences the US scientists observed (Schlundt. 1992).

In the long run, calories count. So if you are counting calories it doesn’t matter if you have breakfast or don’t. There are bazillions of “breakfast eating vs. skipping”-studies, but this is only study #3 to test the long-term effects. Yes, sometimes science is pathetic and stupid – and trying to elucidate the health effects of eating vs. skipping breakfast in studies on three testing days is both: pathetic and stupid.

One of the two non-pathetic studies comes from Schlundt et al. who examined the effects of consuming breakfast vs. breakfast skipping during a 12-week energy restriction weight loss diet in 52 adult women with obesity without finding significant differences.

More recently, Dhurandhar et al. completed a 16-week study in 309 adults with obesity and included a general recommendation to either “eat breakfast” or “skip breakfast”. As it was to be expected when energy intake is controlled for, again, no differences in weight loss were observed in those who began eating breakfast compared to those who continued to skip breakfast.

The NP and HP groups were provided with specific breakfast meals to consume between 6:00 and 9:45am each day, while the CON group continued to skip breakfast (with nothing to eat/drink, besides water) before 10:00am – with significant consequences as the in parts significant inter-group differences in Figure 2 can tell you.

The superiority of (a) having breakfast and (b) consuming a high protein breakfast are not debatable. With its 12-week study duration, the study at hand obviously allowed for a full habituation and did thus – much in contrast to many short-term studies – yield all the benefits that are usually ascribed to having breakfast. In particular, having breakfast…

In spite of that, we should not forget that even a regular breakfast which contained 15% protein, 65% carbohydrates, and 20% fat and consisted of (you guessed it) ready-to-eat cereals with milk outperformed not having breakfast at all. That’s in contrast to some previous studies, most of which used shorter study durations and didn’t allow for the habituation that’s necessary for breakfast to have effects on the total energy intake, for example, to take place.

So what? If you have a teenage son or daughter, serve him / her a high protein breakfast containing 40% protein, 40% carbohydrates, and 20% fat, like an egg-based pancakes and ham; egg-based waffles with pork-sausage; egg and pork scramble; and an egg and pork burrito (all these were options the subjects in the study at hand were provided with on a weekly basis. It’s going to help them manage their weight, food cravings, and hunger pangs and it’s not going to take you an hour to prepare (rather 15 min – max). The scientists assertion that “it is unclear as to whether the daily consumption of a high-protein breakfast, containing 35 g of protein, is feasible in a free-living environment” (Leidy. 2015) is just more pathetic evidence that people care so little about their health that they’d rather die from eating ready-made cereals than to invest the 10-15 minutes to prepare delicious and healthy protein pancakes into their health.

If you are now contemplating to switch back to having breakfast, yourself, let me remind you that it is not possible to extrapolate study results that were generated with a specific group of subjects, in this case overweight, but still healthy adolescents to whomever you want. If you are on an energy controlled diet and skipping breakfast as a means to do intermittent fasting and reduce your overall energy intake, you won’t reduce your 24h energy intake (after all, you’re eating X kcal everyday, anyway). It is thus unlikely that you’d lose more weight than you’d do without breakfast and if you are like many people you will probably even feel hungrier now that you’re able to eat only 3 small vs. 1-2 large(r) meals