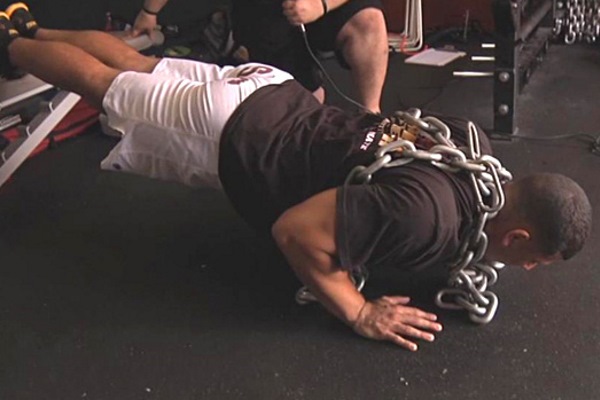 Advanced Bodyweight Training
If you’re a fan of calisthenics and bodyweight training and take pride in your mastery of these old-school movements, it’s time to take it up a notch through bodyweight mechanical drop sets.

Dynamic Growth Is All About Leverage
With conventional weighted mechanical drop sets, you commonly switch to lighter loads or easier variations of the same movement to extend time under tension.

However, with calisthenics and bodyweight exercises, you change the level of difficulty for a given movement mostly by “shortening” or “lengthening” your body and changing the number of contact points to the ground (or bar or gymnastics rings).

This changes the leverage in a favorable and highly efficient manner, which allows you to continue a set without exceeding your capacity to recover.

Warning: This is Difficult Stuff!
Unless you’ve been practicing advanced bodyweight exercises for a while, some of these workouts may be too tough for you (for now).

Here’s how to get around that: Instead of starting with the first, most difficult exercise in the sequence, simply start with the second, somewhat easier exercise. As you get stronger and more coordinated, you’ll soon be able to add in the first movement.

Now, let’s take a look at some of these bodyweight mechanical drop sets, which are also known as advanced regressions in progressive calisthenics.

Regressing From Fewer to Greater Contact Points
Again, if the first exercise in the sequence is too advanced for you right now, just start with the second movement.

Application and Rep Ranges
While the subtle changes in body positioning may not seem like much, they make for a surprisingly humble challenge, especially for haters of bodyweight training.

If you’re a beginner or new to bodyweight exercises, you might want to devote an entire planned workout to these movements. In contrast, advanced lifters are encouraged to add some extra volume at the end of their very strongest planned workout days by doing these bodyweight drop sets.

Likewise, try these movements when you find yourself in situations with minimal time and equipment available.

Here are some target volume/total rep ranges to shoot for with the examples above: