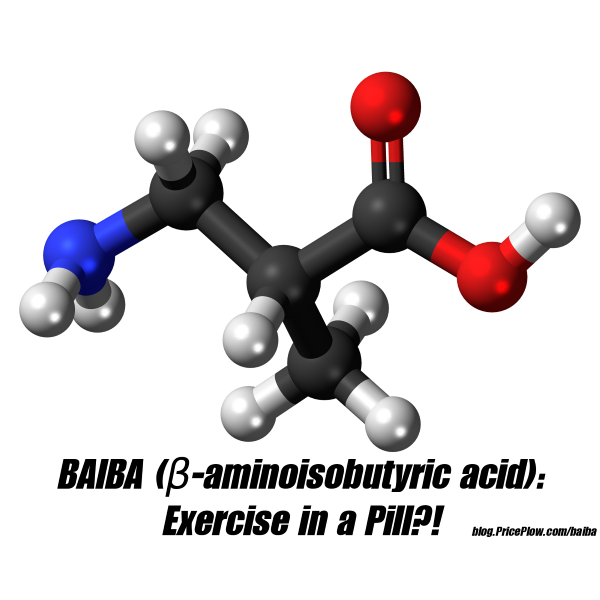 A new slimming supplement has become available recently in online stores and we, the ignoramus compilers of this free webzine, freely admit we are very excited about it. The stuff is called beta-aminoisobutyric acid [beta-AIBA for short], and it works in a different way to all other substances you find in weight-loss supplements.

Beta-AIBA
It’s a simple compound, made in the body by muscle cells, which synthesise it from valine and thymine. More of it is made when the muscles are active. So researchers regard beta-AIBA as a myokines, and suspect that it plays a role in some of the positive effects of physical exercise.

Antaeus Labs [antaeuslabs.com] have marketed beta-AIBA as a slimming supplement. This supplements manufacturer sells the stuff in powder form. If you are considering using beta-AIBA it’s best to start with a dose of 500 mg per day, advises priceplow.com. [priceplow.com May 19, 2015] That’s an eighth of a teaspoon.

Mechanism
In 2014 researchers at Harvard University published the results of an animal study in Cell Metabolism which reveal how beta-AIBA works. The figure below shows summary of that study.

White fat cells are the classic fat cells; all they are capable of doing is storing fat. Brown fat cells are fat cells that can convert the fat they have stored into heat. Adults have few brown fat cells left, but the number can be increased by exposure to factors such as cold and some substances that imitate the effects of adrenalin.

The figure below shows that in the fat cells of mice that had been given 100 mg [+] or 170 mg [++] beta-AIBA daily in their drinking water there was an increase in activity of the typical ‘brown’ fat cell genes such as UCP-1, CIDEA and PGC-1-alpha.

Mice in a control group were given no beta-AIBA. [-]

Effects
As a result of being given 100 mg beta-AIBA every day the mice lost weight. And the weight loss was pretty much all accounted for by loss of fat mass.

The decrease in weight was entirely due to an increase in calorie burning.

Conclusion
“We identify bèta-AIBA as a novel small molecule myokine representing the first in its class of non-adrenergic activators of the thermogenic program in white adipose tissue”, the researchers summarised. “The identification of bèta-AIBA as a […] exercise triggered signal has significant implications not only for our understanding of exercise and its protective role against the development of metabolic diseases, but also for potential therapeutics for type 2 diabetes and the metabolic syndrome.”