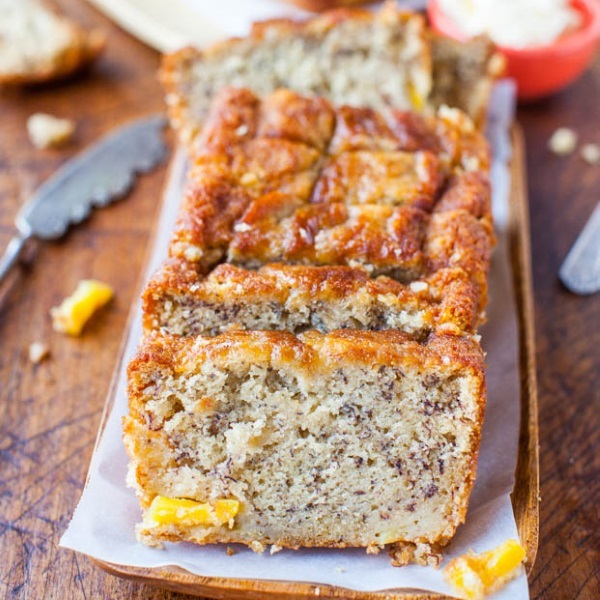 While fat no longer has the bad rep it still had a decade ago, the notion that baking bread with extra fat could have anti-diabetic effects, because it reduces the glucose peaks and the 2h area under the curve (AUC) is unconventional, to say the least; and thus SuppVersity news-worthy, because it is not broscience, but the result of a recent study.

The study was an acute, randomised, controlled, single-blinded trial that consisted of five types of bread, each tested on one occasion in a randomised order on separate days, with at least 3 washout days between test visits.

“Participants were recruited through advertisements and personal communications. Inclusion criteria were as follows: (1) males aged between 21 and 50 years, (2) BMI values between 18·0 and 24·9 kg/m2, (3) blood pressure≤120/80 mg/dl and (4) fasting blood glucose≤6·0 mmol/l. People who had metabolic diseases, were on prescribed medication, were smokers, took part in sports at competitive levels or were concurrently participating in other clinical trials were excluded from the study. Females were excluded from the study to prevent differences in menstrual cycles from affecting carbohydrate metabolism” (Lau. 2016).

On the day before a test session, no drinks, caffeine or physical activity were allowed. In addition, a standardised dinner was provided the evening before to reduce potential variations in GR that may arise because of the second meal effect. On the day after, participants had to report to the centre after a 10–12 h fast between 08.00 and 09.00 hours. There, they rested for at least 15 min before starting the test session, before the test meal was consumed “at a comfortable pace within 15 min” (Lau. 2016). Following consumption of test bread, participants were asked to rate their liking of the bread on a 100-mm liking scale. Blood samples (both venous and capillary) were collected at 15, 30, 45, 60, 90, 120, 150 and 180 min after test bread consumption. The same protocol was repeated until the completion of all the five test sessions.

How was the bread prepared? This is what the scientists report: “The five types of bread used were as follows: control bread without any added fats (CTR) and breads baked with butter (BTR), coconut oil (COC), grapeseed oil (GRP) or olive oil (OLV). The ingredients used for test breads were as follows: 250 g bread flour (Prima), 125 g potable water, 10 g baker’s yeast (SAF), 40 g sugar (Fairprice) and 6 g salt (Fairprice). These ingredients were mixed at speed 1 for 8 min (Kitchenaid) to form base dough, of which 320 g was weighed and then fat/oil was added.

The fats/oils added were 96 g butter that contained predominantly SFA (Anchor), 87 g coconut oil that was rich in medium-chain TAG (Titi Ecofarm), 80 g grapeseed oil containing predominantly PUFA (Borges) and 76 g olive oil containing predominantly MUFA (Naturel). The amount of fats/oils added was calculated based on the percentage fat as stated on the nutritional panel on the packaging, and was added at 20 %, w/w of dough. Oil was not added into the control bread. The dough mixture was kneaded for a further 12 min, and was then allowed to rest at room temperature for 10 min. Following this, the dough was moulded into serving portions and proofed in the oven (EOB98000; Electrolux) at 40±1°C for 30 min in a fan-assisted mode. Baking was carried out in the same oven at 200°C for 18 min, and bread was allowed to stand for 10 min before being served warm” (Lau. 2016).

The results of the scientists’ analysis of the ALC formation in the bread showed that the coconut (COC) and olive oil (OLV) had significantly higher amylose–lipid complex forming ability [reported wrong in the result section of the FT, but correct in the discussion] as compared with butter (BTR) and grapeseed oil (GRP | P<0·05). 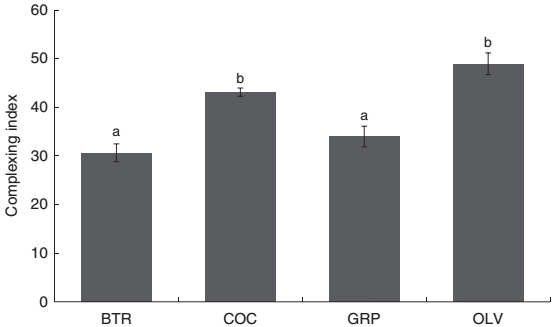 Interestingly, the increased ALC levels in the olive oil bread did not produce the same beneficial effects on the glucose response the scientists observed when the subjects consumed the bread that was baked with coconut oil.

As you can see in Figure 2, all fat-enhanced breads improved the glycemia, but only the grapeseed (closed triangle) and coconut (open triangle) oils also rduced the insulin levels.

Can’t I just add the coconut oil on top of the bread? No, you can’t, because it has to be in the dough during baking – otherwise the amylose–lipid complexes won’t form. What will happen though is that your insulin levels will rise sign. longer (see previous SV article). Edit: Elizabeth Alcott just posted this cool suggestion on Facebook: “Bake low carb coconut flour bread with coconut oil. Reduced calories and glycemic response at the same time.” Not a bad idea, for sure.

What is interesting to see, though, is that the glucose AUC, i.e. the total amount of glucose that is released into the blood was still the lowest in those oils / fats with the highest ALC levels: coconut oil and olive oil.

As the authors point out in the discussion of the results of their study, their regression analysis “further confirmed that CI [=indicator of ALC formation] was a significant predictor of GR [glucose response], although it only accounted for 13·3 % of the observed variability” (Lau. 2016). Furthermore, the scientists highlight that …

“[w]hen examined as IAUC, COC showed the greatest attenuation of GR [glucose response] in baked bread. A similar study by Clegg et al. (2012) showed that high-fat pancakes containing MCT had the slowest gastric emptying rate as compared with other fats/oils over a 4-h period. The low GR [glucose response] of COC in this study could be due to a combination of factors. These include delay in gastric emptying rates to MCT having a higher osmolarity (Clegg. 2012) and formation of ALC resulting in resistant starch (Kaur. 2000)” (Lau. 2016).

To assess the physiological significance of these observations, Lau et al. also investigated the surrogate measures of postprandial β-cell function (IGI30 and IGR) and the insulin response which did – in contrast to the glucose response (see Figure 3), not correlate with the ALC content of the breads. Instead, it appeared to be “partially due to rate of appearance of glucose as a result of carbohydrate digestibility” (Lau. 2016).

So, what’s the verdict? Well, adding ~25g of fat to bread increases its energy content significantly. Therefore, it is not clear how advantageous the improvements in glycaemia observed in the study at hand will actually be – after all, calories still count!

With that being said, the scientists’ conclusion that “[t]he incorporation of fats during bread baking reduces GR, with the greatest attenuation seen in COC,” is a significant result. One that can be partly explained by the reduction in carbohydrate digestibility via ALC formation, but not by any effects on the insulin response to the meal (if you fear insulin, adding fat is thus not going to cut it ).

That the ‘coconut advantage’ is due to lauric acid and myristic acid in coconut oil is likely, but warrants further investigation; the same goes for the scientists’ concluding remark that “[t]he use of simple dietary interventions (addition of functional lipids during cooking of carbohydrate-rich staple foods) may be an effective and practical strategy for improving glycaemic control, and may help in the prevention and management of […T2DM] and CVD” (Lau. 2016)