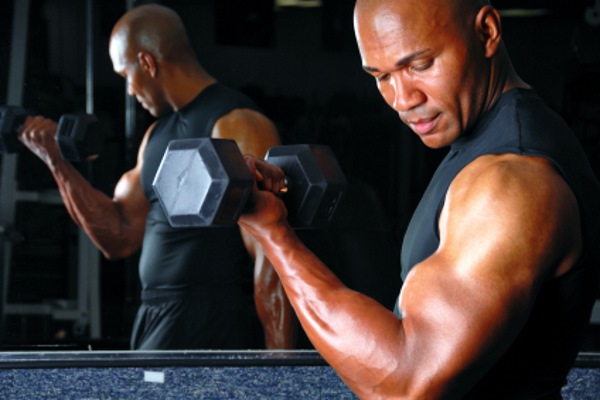 Bodybuilders and other strength athletes can probably build more strength and muscle mass if, before doing their usual sets, they first do a set of lots of reps with light weights. Researchers at the North University of Parana in Brazil write about this in the European Journal of Applied Physiology.

Study
The Brazilians carried out an experiment with three groups of 9 young men. Before the experiment started the researchers measured the size of the head of the subjects’ quadriceps muscles by scanning them. They also worked out the amount of kilograms with which the men could just manage 1 rep on the leg-extension machine.

One group of men then did nothing for 8 weeks; the control group [CO].

A second group trained their upper legs for 8 weeks on a leg-extension machine [TR]. The men did 3 sets with 75 percent of the weight with which they could just manage 1 rep [1RM]. Between sets they rested for 1 minute.

The third group did almost exactly the same as the second group, but started each mini-workout by doing a set with only 20 percent of their 1RM. The men did as many reps as they could with that weight, then rested for 30 seconds after which they started the rest of their sets.

Results
The men who started their workout with the light set built up more muscle strength than the men who trained their legs in the traditional way.

The scans also showed that doing a set at failure with light weights resulted in a bigger increase in muscle mass.

Mechanism
“We hypothesized that muscle failure (principally of type I fibers) and metabolic accumulation induced by prior exhaustive exercise would promote a greater global recruitment of type II fibers during traditional training sets and,thus, further stimulate muscle performance and adaptations”, the researchers wrote.

“Our results confirm this hypothesis by showing for the first time that 1RM knee extension, CSA, […] were significantly enhanced by the inclusion of a single set of exhaustive exercise at 20 percent of 1RM immediately before traditional resistance training.”