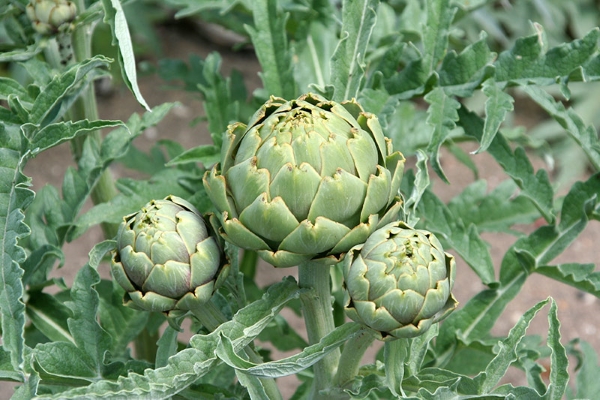 Do you want to use creatine, but are you worried about the effect on your kidneys? Or are you worried that creatine will lead to water retention? A supplement containing artichoke or Cynara scolymus may help. An article in a German nutrition journal that is new to us, Deutsche Lebensmittel-Rundschau, suggests that artichoke may help. According to the article, artichoke extracts protect the kidneys against the potentially damaging effects of creatine.

The article describes experiments on rats in which they were given 300 mg creatine per kilo bodyweight daily for a period of four weeks. For an athlete weighing 80 kg that’s equivalent to 24 g creatine per day.

The supplement reduced the rats’ kidney function: the concentrations of urea, ammonia and lactic acid in the animals’ blood increased. The kidneys’ function is to remove these substances from the blood and pass them on to the urine. The amount of potassium in the blood decreased. And the concentration of N-acetyl-beta-D-glucosaminidase (NAG) increased in the animals’ urine. NAG is an enzyme and is an indicator of kidney damage. It is normally active in the kidneys, and if you find NAG in the urine it’s a sign that there’s probably something wrong with the kidneys.

The creatine supplement also interfered with the rats’ hormone balance. Their aldosterone concentration rose. Aldosterone is a steroid hormone that causes the kidneys to retain more salt and water and to excrete more potassium.

Aldosterone therefore also causes blood pressure to rise. [Hmmm… Some people swear they retain water when they take creatine, and that they get a moon face. Is that because creatine increases the production of aldosterone?]

The researchers tested different extracts that they had made themselves. Extracts from the tips of the plant were more effective than extracts made from the leaves, the researchers discovered.

Artichoke is marketed as a liver protector. The active ingredients in supplements containing artichoke, if we are to believe the studies, are cynarin and chlorogenic acid. The chemical structure of cynarin is shown below.

Chlorogenic acid is a component in coffee. In fact, coffee contains such high concentrations that people who drink a lot of coffee ingest a couple of grams of chlorogenic acid a day. It’s the chlorogenic acid, researchers suspect, that is responsible for the liver protection function of coffee.

Brazilian researchers have recently examined the effects of similar doses of creatine in humans. The human test subjects took creatine for three months and their kidney functions did not decline. In fact, the creatine supplement seemed to actually improve the kidney function. It would appear that humans can take creatine better than rats. But undoubtedly there are also people who react less well to creatine, and may retain large amounts of water for example. For them an additional artichoke supplement maybe an option.