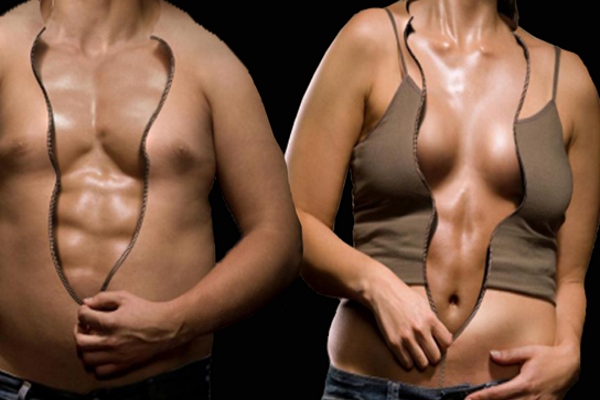 You won’t be able to peel off the fat in days on the “AC stack”, but it’s ability to help you burn 13% extra energy and ramp up protein synthesis will help.

No, Ann G. Liu and her colleagues from the Pennington Biomedical Research Center and the Louisiana State University Health Sciences Center are not totally out of their mind and after reading today’s SuppVersity article you may even think that the idea of using prescription drug fat burners in children is odd, but not totally insane (considering the number of kids on Adderall & co). After all, the scientists latest study shows that albuterol with caffeine in dosages similar to those that have been previously approved for the treatment of asthma in children and adolescents, can safely increase thermogenesis in adults and will – at least in the rodent model – produce significant increases in lean body mass and reductions in fat mass without caloric restriction and on obesogenic (=fattening) baseline diets.

It is thus not totally crazy to assume that “this combination [caffeine + albuterol] may deserve further exploration for use in treating pediatric obesity” (Liu. 2015). What I am wondering about, though, is why Liu et al. think of pediatric obesity, first, when thei study shows, that different dosages of caffeine (0-200 mg) and albuterol (0-4 mg) yield highly significant increases in energy expenditure in 18-50 year-old, healthy, normal-weight study subjects (Figure 1). So why kids? Why not adults? 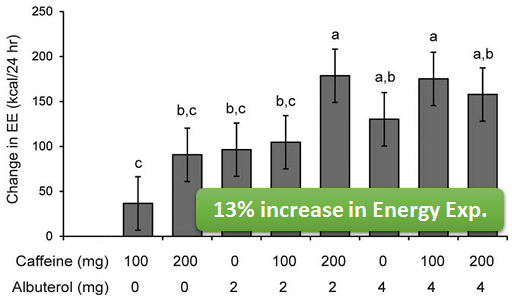 Be that as it may, without without long-term safety and efficacy trials in whoever is supposed to use the “CA”-stack as a weight loss drug, no doctor should prescribe 200mg caffeine and 2 mg albuterol to kids or adolescents; and that’s despite the fact that the ~13% increase in 24h energy expenditure or, for this subject group, ~175kcal /day would probably help adults and kids, alike, lose body fat faster.

Clenbuterol won’t make you as muscular as a Belgian Blue myostatin negativ bull, but its effect on myostatin and muscle protein synthesis may be potent enough to have significant body recompositioning effects (learn more)

Where does the muscle come from? As a SuppVersity reader you will know that clenbuterol, the long(er) acting cousin of albuterol, is a muscle-building myostatin inhibitor. What you may not know, though, is that the muscle building effects of other beta-2 agonists – including albuterol and salbutamol – are similarly well-established (Carter. 1994; Skura. 2008). In that, scientists believe that their ability to increase skeletal muscle mass is a result of both increases in muscle protein synthesis and decreases in protein degradation (Bates. 1991; Rogers. 1992). For clenbuterol, this increase in muscle anabolism is at least partly mediated by the aforementioned reduction in myostatin expression and an increase in muscle sensitivity to insulin, which has a primary role in protein synthesis (Bates. 1991).

If we simply assume that the chronic effects would be identical to those Liu et al. observed in the “rodent part” of their combined acute human + chronic rodent study, the benefits could be huge. 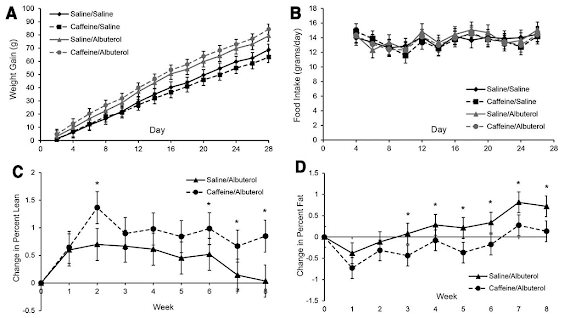 Figure 2: Weight development (B) and food intake (B) as well as changes in lean (C) and fat (D) mass in the long-term rodent study Liu et al. conducted to asses the effects of chronic caffeine + albuterol consumption on the body composition of rodents who were fed an obesogenic high fat + high energy diet to emulate the effects of the Western junkfood diet.

After all, the increase in energy expenditure was not compensated for by increases in energy intake, and the albuterol + caffeine mix did not just ameliorate the weight gain, it also triggered profound improvements in body composition (%body fat / lean mass) in the male Sprague-Dawley Liu kept on an obesogenic high fat diet in the 8-week rodent trial (see Figure 2), they conducted next to the previously mentioned human trial (see Figure 1), in which they observed 24h EE increase.

Bottom line: Liu et al. are right: Long-term safety data for the use of albuterol + caffeine in kids is actually available from studies in children and adolescents with asthma. They are also right, when they say that albuterol is an inexpensive generic medication that’s already approved for the treatment of asthma in children age 6 years; and it’s similarly hard to argue that caffeine is not only a food, but also an inexpensive approved nonprescription medication for the treatment of drowsiness in children aged 12 years or older.

Figure 3: If used prudently ephedrine can safely lower the amount of body fat even in normal-weight individuals (Carey. 2015) | learn more

Accordingly, there shouldn’t be a problem with prescribing both to kids, if it wasn’t for the sad story of ephedrine which turned out to be (a) too cheap, too potent and “too not patentable” not to be a thorn in the pharma lobby’s side. Since it was unfortunately also (b) too tempting not to be overdosed by stupid idiots who didn’t care that studies showed that taking more ephedrine and caffeine would only increase the sides, yet not the weight loss effects… well, you all know what happened when (a) and (b) came together, right? The FDA banned ephedrine; and I am pretty sure it’s going to refer to the “ephedrine disaster” if someone tried to bring a prescription weight loss formula with albuterol and caffeine to the US market.

Against that background I have my doubts that the authors’ suggestion will ever make it into the medical practice. In spite (or rather because?) the combination of albuterol and caffeine does in fact appear to be a promising adjunct to (not a replacement for) lifestyle interventions in both young and old. What do you think? |