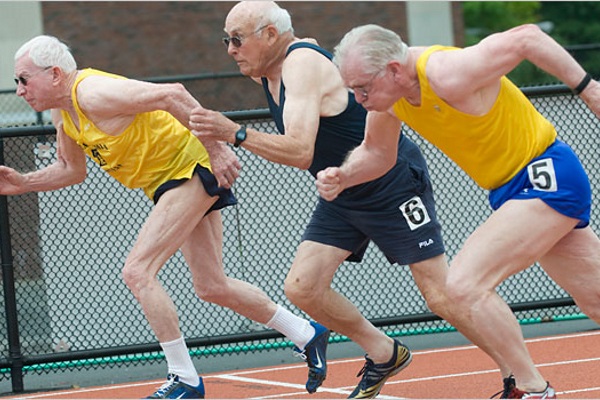 Never tell me you’re too old. Never tell me it’s because you’re aging that you’re fat, sore, achy, can’t recover, not as strong, not as fit, or… The list of excuses laid at the feet of aging is maddening and mistaken.

Aging is society’s unconsciously agreed upon excuse for its laziness, for not taking personal responsibility for its own health and wellbeing. Even in CrossFit circles, where we are smashing preconceived notions of ageing, I continue to hear these excuses – and from thirty-something-year-olds! Honestly and holy hell, please stop with the self-delusion and lies.

Age hasn’t stopped me from making it to the CrossFit Games as a Master’s Athlete.

The Myth of Aging

Aging isn’t a sentence that kicks into affect at exactly 27, 33, or forty years of age. It’s a process that can be slowed, and it’s a choice you make. In fact, aging is the accumulation of all the choices, decisions, and actions you take over the course of your lifetime.

The more consistently your daily choices and actions are health promoting, the more prolonged your experience of the fountain of youth will be. The opposite is also true. The poorer the choices you make and the harder you treat your body, the more rapidly aging sets in.

“Aging is a bullshit myth that society has sleepily agreed to indulge and use to excuse itself for its laziness. It’s like a drug that people have become addicted to. It’s an excuse for opting out and giving up.”

“But it’s different for me,” people tell me. Really? How? You have two arms, two legs, and a brain. You choose what you put in your body, what environments and people you expose yourself to, what information you allow into your head, how much sleep you get, the quality of your nutrition, whether you hydrate yourself, and what exercise you get. You choose to stress or not. You choose to self-abuse (coffee, drugs, alcohol, sugar, TV, chemicals, cigarettes, junk food) or not. You choose to fight for your dreams or not. You choose laziness or mental toughness. The list is endless. You literally choose ageing – or not.

Diana Nyad spoke about her experience at a TED conference.

“I’m 42. I’m to old to make the Olympic Games.” Really? Dara Torres did, and she won three silver medals – at her fifth Olympic Games.

“I’m 70. I could never compete in the Lanzarote Ironman.” Really? Eddie Brocklesby did and became the oldest woman to ever complete the course. She began running at 52 years of age, but had never trained before that.

Eddie Brockelsby offers some words of encouragement to aspiring triathletes.

What sets these people apart? What sets any champion apart? Choices, actions, and discipline. That’s it. That’s the “miracle cure” to aging. The magic bullet, the pill everyone wants the doctor to prescribe.

You can’t sit at a desk all day; smash sugar, coffee, and energy drinks; watch TV and computer screens for hours on end; stress about everything while you chase the outward signs of affluence; smoke, eat out all the time, and stay up late; hate your job, drink to relax, and take medication for everything; get little exercise, war with your family, and hate yourself. If you want a recipe for aging, any of these ingredients in any quantities will do it.

Take Care of Yourself

Cells age. How you treat them determines how you age. A dehydrated cell has a shrunken and shriveled appearance, rather than an appealing round and consistent appearance. This alone dramatically affects the way things like nutrients, minerals, trace elements, and fluids are able to cross the cell’s membrane.

If your cells aren’t able to exchange nutrients within their environment (you), your body cannot maintain its systems with ease and efficiency. Your body will overwork and underperform. It will steal bits from here to plug up holes there.

“You have choices. Every thought, word, action, and deed is a choice. It is a step in the direction of the fountain of youth or a giant leap toward premature aging.”

The body is a clever adaptive machine, but it can ultimately work against itself. Its primary goal is to keep you alive, so to achieve that aim it will rob itself of nutrients in one area to fuel another area more critical to life support. You can imagine the consequences as this goes on over years – deficiencies, inefficiencies, inflammation – nothing good.

And that’s only talking on the level of a dehydrated cell. We haven’t even considered the consequences of chemicals, toxins, irritants, and foreign particles (things we think are “food” but are far from it) introduced into the body through skin, lungs, and digestive tract.

Nothing will age you faster than overly processed food – especially anything you obtain via a dive-thru window.

So instead of maintaining and growing, the body is wasting its resources and energy on warring with itself. The war against aging is the war against inflammation. And, again, the choice is always yours.

Win the War Against Aging

If you want to win the war against aging, here are my top eleven tips for crushing the competition:

Age Is Just a Number

Aging is a bullshit myth that society has sleepily agreed to indulge and use to excuse itself for its laziness. It’s like a drug that people have become addicted to. It’s an excuse for opting out and giving up.

I say “no” to aging – and you can, too. You have choices. Every thought, word, action, and deed is a choice. It is a step in the direction of the fountain of youth or a giant leap toward premature aging.

I know where I’m spending my time, money, energy, and passion – how about you?