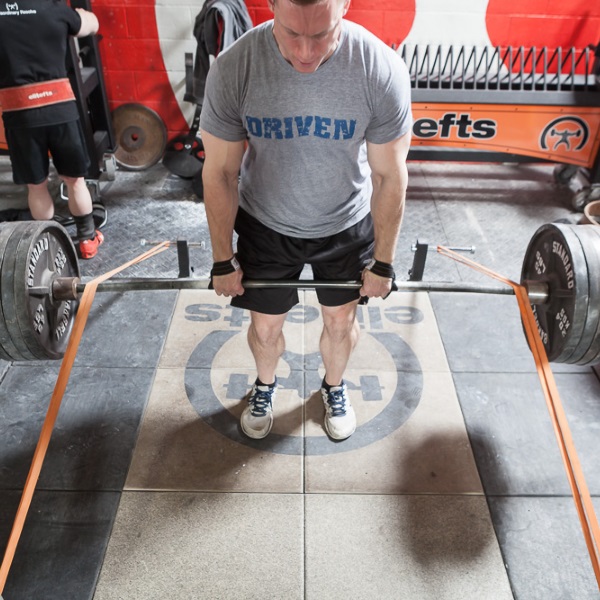 I want to quickly cover the isometric method. I’ve seen some discussion about it and there have been several articles applying it many different ways. I want to talk a little bit about how I’ve applied it throughout my career both as a powerlifter and bodybuilder and also for rehab.

There’s a lot of advantages with the isometric method, being that it can be used for rehabilitation of injured muscles. It doesn’t have a lot of impact and ability for hypertrophy, which is what you’re looking for in some cases, such as training in sports. It can be of great benefit to sports that require more relative strength than absolute strength.

The fatigue that is acquired throughout the use of isometrics is typically not going to be to the same level of the fatigue that you would get using many of the other methods. Another factor with isometrics is that you can do this with very simple apparatuses. You really don’t need a training partner. It can also be done with complex apparatuses, where one of the power racks that we sell is an Isometric Power Rack, which has an attachment that comes out to the front and allows you to get very specific on a lot of different types of isometrics. This creates the ability to do quad isometrics and different type of isometric work. These methods are beyond the scope of this article.

There are some disadvantages to the isometric method in that it is angle specific. I’ve read that anywhere between 10 and 20 degrees is what you’re looking at. For many, the games are really hard to carry over to any type of dynamic or explosive type of strength. It is a static contraction, which does not necessarily lead to the development of flexibility. I’m going to say that one depends upon the joint angle. If the joint angle is closer to three quarters or almost a full stretch position, I’ve personally seen for rehabilitation that it actually does help a little bit with flexibility because of the muscular inhibition that you have when the muscle is damaged or the joint is damaged.

The gains that are made in any type of isometric are usually quickly lost, so it’s best used one of two ways: either throughout the whole training cycle if it’s for strength or on the very ass end of the training cycle if it’s to use as a bridge to try to overcome some type of sticking point. If it’s for body building, it’s just going to be used for an intensification factor. If it’s for rehab, it’s going to be used to help get the injury back on par to be able to do the regular training and ranges of motion that you need to do to be able to get back to your regular programming.

The load with isometric work a lot of people recommend is 80% to 100%, which I personally think is way too much and confusing. Let’s look at this as effort and how much tension you will be applying. The effort should be on a scale of 8-10 but many people I speak with think they need to use 80-100% weight and lift a partial and then press into the pins. This is a different type of isometric loading I will save for another time.

When you’re dealing with the time of the contraction and the number of reps and the total sets and the rest intervals and so forth, that all can and should be cycled. It’s not like you’re going to do three sets of 30 seconds, session after session. For the total duration of the contraction for a training session that I was doing, I stayed within the recommendations that I saw with Isoholds from Charlie Francis wrote about. I kept it between a 60 and 120 total seconds per training session. However you wanted to break that down, I would typically start on the lower end of sets of 4-10 seconds per contraction and then take it from there slowly.

If you’re pulling a bar against pins like a deadlift, it’s going to be really, really fucking hard to be able to pull for 20/30 seconds without blowing a hemorrhoid out of your ass. It usually falls on the smaller end of that time frame in the 30 to 60-second total time frame for the whole session if for strength or trying to overcome some type of mini max or a sticking point.

If for rehabilitation and more isolation type movements, you’d fall a little bit on the higher end. The frequency per week if it was for injury or for body building intensification is three to four times per week. For strength development, once a week or twice a week depending upon how your program is set up — once a week for the squat and deadlift, which I always considered the same training session, and then once a week for the bench is enough. After one or two weeks, you want to cycle off of it, but then come back to it later.

This is just a general overview. In time, I’ll get into specific exercises to be able to address certain sticking points in mini-maxes and specific exercises to be able to address the rehab that I’ve had to go through. If you follow my training log, you’ll see how I use some of this stuff now just for joint health. That’s scattered throughout pretty much every training program that I do. From the frequency standpoint, it’s much higher, but it’s more for joint health. It’s done at a lower percentage. The time of contraction is longer so it’s typically just one set per training session or workout.