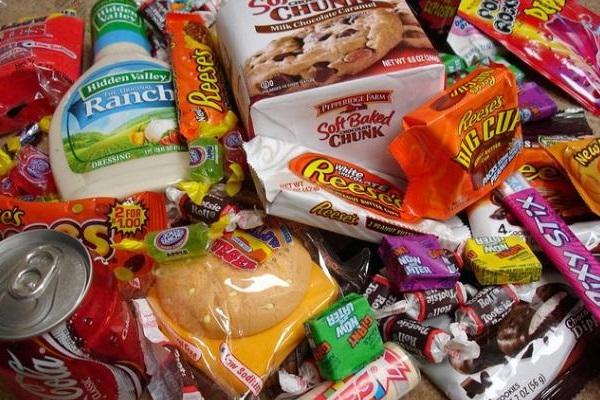 Although “ancient grains” like quinoa and amaranth are exploding in popularity, a new study from The American Journal of Clinical Nutrition found that the average American gets 61 percent of his or her calories from highly processed foods.

Translation—the typical American diet is packed with foods that didn’t exist a thousand years ago. It’s not just that they didn’t exist, they couldn’t exist. Processed foods are a product of modern technology and manufacturing, meaning you won’t find them growing on a tree anytime soon. But just because a food is processed doesn’t necessarily mean it’s bad for you. It comes down to the level of processing and the direct effect it has on the nutritional profile of a food.

“It’s important not to demonize all processing,” says Ryan Andrews, nutrition coach at Precision Nutrition. “Minimally processed foods can be quite useful, and include items like rolled oats, shelled nuts, canned beans, frozen vegetables, etc. They can help someone eat in a tasty, nutritious and sustainable way.”

So unless you go into your garden and pick it yourself, almost every food is technically “processed.” The key to making smart nutritional choices is to choose minimally or moderately processed foods more often than highly processed foods.

In the aforementioned study, the purchases of 157,142 American households were analyzed over a 12-year period. Each purchase was put into one of four categories based on their level of processing—minimally processed, basic processed, moderately processed and highly processed.

Foods from the highly processed category were found to provide 61 percent of the calories in the average American’s diet. Among the most popular choices were refined breads, cookies and sugary sodas and juices.

Less Is More
Highly processed foods are heavily altered versions of the plant or animal products they contain. Plus, they are often stuffed with additives, meaning they’re tipping the nutritional scale in the wrong direction.

“Highly processed foods can taste really good. A little too good. This is because they’re designed to elicit maximal levels of pleasure and consumption,” Andrews says. Over time, our brains can get addicted to the effects highly processed foods have on our bodies, so we seek them out. A recent study in the scientific journal PLoS ONE concluded that, “highly processed foods, which may share characteristics with drugs of abuse (i.e., high dose, rapid rate of absorption), appear to be particularly associated with ‘food addiction.’”

Andrews offers this example: most people find it harder to eat a reasonable portion of potato chips compared to a lower processed food like boiled potatoes. There’s a reason why Lay’s Potato Chips uses the slogan, “Betcha can’t eat just one!”

Besides their potentially addictive qualities, highly processed foods are popular because they have traditionally been thought of as convenient and affordable. Indeed, they might be more convenient if you want to avoid all preparation, but if you’re willing to put in a little effort, lower processed options are much more cost-effective.

The key is not to give up highly processed foods altogether. That’s probably an unrealistic goal for most people. Rather, it’s important to learn which highly processed foods you can handle well and eat in moderation and which ones you cannot. If you can limit yourself to a scoop of ice cream every couple of days without binging, you can probably find a place for ice cream in your diet. But if you ares someone who finishes the bag every time it’s filled with chips, you know that’s a food to avoid.