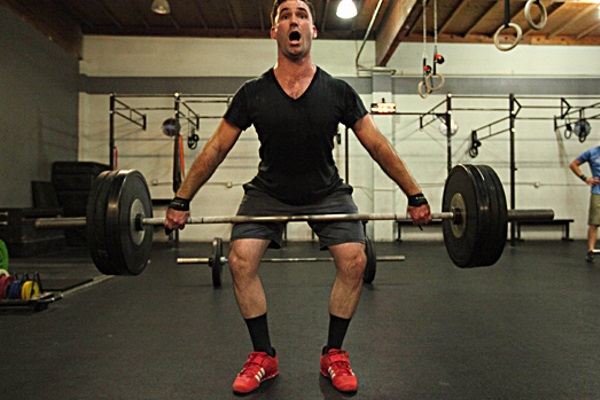 What Olympic Lifts Will Do For You
I’ve said it before and I’ll say it again: You won’t end up looking like Klokov by training the Olympic lifts.

This doesn’t mean Olympic lifts can’t develop your physique. It’s possible to train like a weightlifter and still improve your look.

Olympic lift variations and their assistance exercises can be very effective in building the traps, legs, glutes, upper and lower back, and shoulders.

But to be able to build muscle mass while training like a weightlifter you need to know why elite weightlifting training isn’t effective at stimulating overall muscle growth.

Once you know this, you can modify your training to reach your goals.

6 Facts About Elite Olympic Lifters
At the elite level, the top lifters strive to stay in the same weight class for most of their career.

There are a few exceptions. Some will hop back and forth between two classes depending on the competition. But very few actually let their body grow one or two full classes up. Once they find their optimal weight class, they tend to limit methods that’ll make them gain size.

Their volume is spent mainly training the snatch and clean & jerk (and their variations), front and back squats, and hyperextensions.

Depending on the coach’s philosophy, this will be anywhere between 75 to 100% of their training volume. Modern-day lifting is all about technical mastery – being as efficient as possible – and neural efficiency.

Reps are normally kept between 1 and 3 on most lifting exercises. This will give the lifter mostly neural adaptations and won’t lead to much muscle growth.

A paper by the coaches for the Kazakhstan national team even goes as far as stating that the goal is an increase in strength without an increase in body mass. Training is planned with that goal in mind.

The eccentric (negative) component is greatly diminished when performing the Olympic lifts because modern lifters drop pretty much every rep from the lockout/end position to the floor.

There’s a minimal eccentric component when the lifter catches/receives the barbell (to break its downward movement) but this lasts just a fraction of a second and is done in large part by the stretch reflex. That makes this “eccentric loading” insufficient to stimulate much growth.

The development of the proper lifting technique has evolved a lot in the past 20-30 years. The best lifters are extremely efficient, decreasing to a minimum the height at which the barbell is pulled.

The best lifters are normally those who move the fastest and more precisely under the barbell. At that point, leg strength is the limiting factor (to stand up with the barbell) which is why front/back squats are a huge part of their training.

If you compare that to the technique of lifters from the ’60s, ’70s, and ’80s, the latter weren’t as fast getting under the barbell. Instead they pulled to a greater height, which required a big emphasis on pulling strength, both upper and lower body.

The time under tension for each set is very short, roughly 3-12 seconds per set. This is suboptimal for the development of hypertrophy, which is best accomplished by sets in the 30-60 seconds range.

Furthermore, most of that 3-12 seconds isn’t spent under maximum tension because in the Olympic lifts you only produce maximum force for a very brief period of time – at the point of explosion in the power position.

Prior to the “explosion” the lifting is submaximal, essentially a deadlift-like motion with 40-60% of your deadlift, and afterward the barbell is largely moving up due to the imparted momentum.

Modern day weightlifting has a lot more emphasis on speed and power than slower-speed strength.

Exceptions Give Us A Clue
Out of the modern day lifters, the Asian athletes – from China and North Korea mostly – have the most muscular bodies. We’re speaking in terms of body composition and having a lean and muscular look.

Out of all the elite weightlifters, they’re the ones using the most assistance exercises: lots of pulls, rows, chin-ups, dips, handstand push-ups, lateral raises, triceps extensions, and even barbell curls.

It’s not unusual for them to do 30-45 minutes of bodybuilding work at the end of their lifting session.

Lifters from Russia and Poland also tend to have plenty of muscle and they use a lot of assistance exercises too, mostly various pulls and presses.

They don’t have the same type of development as the Asians (less arms and pectoral development) but still look more muscular than the lifters using a program relying only of the competition lifts and squats.

These two groups of lifters also tend to do more volume of work with a lower average weight.

Lessons From Old-School Weightlifters
Weightlifters from the ’60s, ’70s, and ’80s were more muscular than today’s lifters. They had more arm, shoulder, and upper back development. On average they were also leaner.

David Rigert, Anatoly Pisarenko, Pavel Pervushin, Lee James, Phil Gripaldi, Bill Starr, Yuri Vardanyan, and Sultan Rakhmanov, to name a few, had physiques that most of us would be very happy to have.

The Press Was Included
Prior to 1972, a third lift was contested in weightlifting competitions: the clean & press. The press was more of a slow-speed strength movement and involved the upper body a lot.

The press actually had a huge place in the training of weightlifters from the ’60s and early ’70s. Lifters used a lot of assistance work like the bench press, incline press, and push press to strengthen that lift.

David Rigert
Even though the press was removed from competition after 1972, it took some time for coaches and athletes to change the training approach. So lifters from the ’70s and early ’80s trained in the press era and had time to develop their upper bodies.

Today’s lifter has a more efficient technique. They get under the bar faster, which means less emphasis is placed on pulling high.

When you pull the bar higher, you focus a lot more on the strength of the upper back, traps and even arms, as opposed to only maximizing leg and lower back strength.

This partly explains the thicker traps and upper back of lifters from the ’60 through ’80s.

They Couldn’t Drop the Bar
Another major factor contributing to the thicker traps, upper back, and arms was bumper plates – the lack thereof.

Bumper plates, which can be dropped without damaging the barbell and platform, were introduced in the late ’60s. Prior to that, lifters trained on iron plates.

The competition rules stated that the lifter had to lower the barbell down to the platform after a lift and in training. They didn’t drop the barbell (unless it was a missed lift) because it would damage the bar.

The lowering portion of the Olympic lifts placed a tremendous eccentric load on the shoulders (when lowering a jerk or snatch down from overhead) and on the traps and arms (when lowering down to the thighs and floor).

They Used Higher Reps
Finally, old-school lifters used higher rep ranges in training. The norm was closer to 3 reps per set on the competition lifts and 5 reps on the strength building movements.

It’s also worth mentioning that in the US it was typical for Olympic lifters to do bodybuilding work either off-season or between competitions. Tommy Kono, John Grimek, and Steve Stanko were international lifters who also won bodybuilding titles.

7 Training Modifications for Muscle Mass
Who this is for: Those who enjoy training the Olympic lifts and want to make them the cornerstone of their routine. They like the feeling of explosion and feeling athletic, but they also want gains.

Who this is not for: Those interested in competing at a high level in Olympic lifting. Those people would be well served to train in a way that’s more in line with modern-day weightlifting programming.

Use more assistance exercises.
Your first choice should be movements that will have a positive impact on your Olympic lifts: pulls (hang, floor, blocks), deadlifts with your clean and/or snatch form, military presses, push presses, deficit deadlifts, power shrugs, and barbell rows for example.

A typical session for me will include:

Include plenty of work from the hang or blocks.
These force you to lower the weight back to the starting position after a completed lift and add a bit of eccentric loading. Lowering a snatch/clean or absorbing the bar on the way down on high pulls from the hang can build traps fast.

Focus on accumulating volume in the 75-80% range rather than going all-out all the time.
Doing 6 x 3 for the Olympic lift variations and 4-5 x 4-6 on the assistance exercises. Accumulate quality volume focusing on technical precision and speed.

When doing slow-speed strength exercises, focus on lowering the weight slowly in 3-4 seconds.
Think military press, back/front squats, and good mornings. This will add the eccentric component that’s lacking from training on the competitive lifts and their variations.

Add dips and pull-ups to the program.
Dips will hit the triceps and chest nicely while maintaining proper range of motion at the shoulder joint. Pull-ups will improve back, arm, and grip strength. For these “bodybuilding” exercises do 3-4 sets of 6-8 reps.

Do isolation work for a muscle that you feel is neglected by the program.
Just make sure that it’s trained at the end of the session and no longer than 15 minutes.

The Benefits
Making these adjustments will allow you to build plenty of muscle while working on your Olympic lifts. They’ll help you get leaner.

Explosive work has been shown to increase insulin sensitivity more than other forms of training. And the more sensitive you are to insulin, the easier it is to get lean.

Yes, focus on increasing the load, but not at the expense of form, speed, and volume.

If you ever decide to test yourself, you’ll need only 1-2 weeks of training on sets of 1-2 reps with reduced assistance work to peak your strength and get used to the feeling of maximal weights.