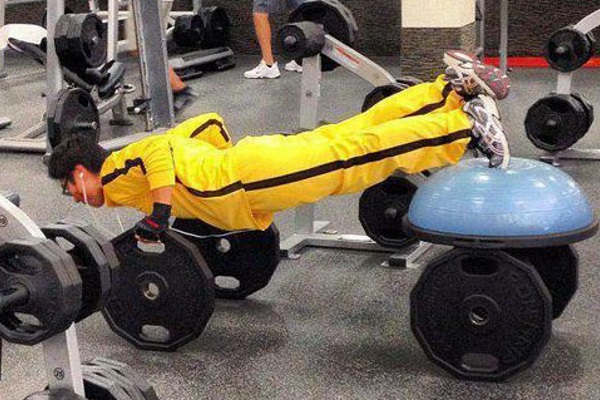 When it comes to working out, sometimes creativity is not always a good thing. Trying to change tried and true exercises and techniques to improve results, or simply to look cool, can seriously set you back in your training if you’re not careful.

This happens far too often. Athletes fall in love with a few pieces of equipment, create exercises using them, and end up hurting themselves. Or they hear about some bro-science technique from one of their friends, which either doesn’t work or turns them into a bodybuilder, not an athlete.

Strength coaches see these kinds of ridiculous mistakes every day. So we asked our STACK experts to share stories of athletes who make dumb mistakes in their training, and what you should do to avoid making similar ones.

1. Adding BOSU Balls to Everything
The BOSU Balance Trainer is a fantastic tool for improving balance and stability. We recently demonstrated 9 BOSU exercises we recommend for athletes (shown in the video above). Because of its benefits and perceived difficulty, athletes sometimes assume that adding the BOSU to their exercises is always better. However, sometimes less is more.

Scott Thom, strength coach for Washington State University’s men’s basketball team, recently witnessed this firsthand. He recalled, “My most recent ‘wow, that’s interesting’ sighting was an athlete doing Hang Cleans on a BOSU ball to, as he put it, improve his balance. Since this was an accident waiting to happen, he was asked to stop.”

Alex Rosencutter, owner of Rosencutter Ultra Fitness and Performance (Wauwatosa, Wisconsin), has seen athletes make similar mistakes. He says, “The biggest mistake I’ve seen an athlete make was performing weighted Squats on a BOSU ball.” Rosencutter explains that when you stand on an unstable surface, the big muscles responsible for lifting most of the weight turn into stabilizers, preventing them from doing their primary job.

You have to think about the purpose of the exercise you’re performing. Is it to get stronger? If so, do it on solid ground. Are you trying to improve stability and balance? Using the BOSU ball is OK.

2. Performing Barbell Box Jumps
Athletes love to show off their crazy-high Box Jumps. Just go on Instagram or Twitter and search #BoxJump. You’ll see it firsthand. Although it may look cool, we don’t recommend it—ever.

To make matters worse, some athletes take it to the next level by performing Box Jumps with a heavy barbell. “Those videos of guys doing barbell Box Jumps with insane weight on their back bother me so much,” says Stan Dutton, co-owner of Training for Warriors Boston. He points to a video he recently saw of someone who barely makes a Box Jump with 315 pounds on his back. “It’s more of an explosive hop, step and stumble than it is a jump,” he says.

Instead of showing off in front of the camera, Dutton recommends turning off the camera and finding a box height that’s challenging without using weight. “[Your] knees and lower back will thank [you] later,” he adds.

3. Running Super Fast on a Treadmill
Ever see someone running on a treadmill at a speed that just looks too fast? The belt seems to be moving faster than their legs can move, and it kind of looks awkward. Rather than using a nice and efficient running stride, they’re flailing just to keep up.

The idea seems to be that if you force yourself to sprint faster on the treadmill than you can sprint on the road, you’ll get faster. Problem is, you only make yourself look dumb and risk launching your body off the treadmill.

“I see a lot of athletes using ultra high-speed treadmill running to work on stride frequency and foot speed,” says Tony Bonvechio, strength coach at Cressey Sports Performance (Hudson, Massachusetts). “I don’t see tons of value in these, especially if an athlete hasn’t maximized technique or his or her ability to put force into the ground.”

If you want to get faster, Bonvechio advises spending your time getting stronger and working on acceleration drills.

4. Doing Too Much At Once
When it comes to training, more is not always better. The reason you’re not seeing the results you expect might be because you’re doing too much and your body is breaking down, not because you need to lift more weight or train harder.

Unfortunately, too many athletes fall into this trap.

“I had one athlete who was playing two sports, working out two times a week and not getting enough to eat,” recalls Josh Williams, strength coach at Spurling Training Systems (Kennebunk, Maine). “He was complaining that he was getting slower and not faster and wanted to know what he needed to add to his program to get faster. I told him to stop adding and cut out one of your sports, eat better and give your body some time to recover.”

If you’re playing a sport, it’s important to continue training, but only two to three times per week and with less volume. Since your goal is to perform your best in your sport, not necessarily in the weight room, proper recovery is critical. Supporting your performance with sound nutrition choices ensures you will have the fuel and nutrients you need to perform and recover.

5. Strength Training With an Oxygen Deprivation Mask
Every day, it seems, another athlete posts a photo on Instagram while training in an oxygen deprivation mask—or what looks like a Bane mask

The idea is to simulate high-altitude training, which increases the body’s ability to use oxygen. “There is a lot of validity to hypoxic training. This refers to exercising, living in, or otherwise limiting relative oxygen availability to enhance athletic performance or to acclimatize to altitude prior to an athletic event taking place at high-altitude,” says Tony Gentilcore, co-founder of Cressey Sports Performance.

Problem is, you’re not actually training at high altitude.

“Making your training feel harder by wearing one of these masks won’t equate to improved performance,” Gentilcore declares. “I’d argue you’re causing negative adaptations to occur, and you’ll gain very little in terms of anything positive happening that will translate to better performance on the field, court or diamond.”

John Rusin, owner of JR Fitness Systems (Madison, Wisconsin) agrees. “The mask will make you a dysfunctional and highly compensated breather,” he says. “Just the type of automatic sympathetic response [nervous system response] you [don’t] want when it’s the fourth quarter and your team is down by a score.

“These days it seems a Twitter picture holds more ground with youth and developing athletes than does research and anecdotal studies,” Rusin adds sarcastically.

The idea is to put the muscles under tension for a longer duration, creating more muscle mass. Not only will you fail to make significant strength gains using this method, but high rep routines will wear down your body. Scarpulla explains, “Over time, their joints are so worn out and overused, it’s ridiculous. That’s like a pitcher thinking that to get better, he should go out and practice by throwing 1,000 pitches. What do you think is going to happen?”

Stick to rep ranges designed to meet your training goals. Again, more is not always better.

7. Not Using Your Head and Causing an Injury
The number 1 goal of any training program should be to reduce the risk of injury. A strong athlete who always gets hurt is no good to his team.

So we have to shake our heads when an athlete or coach does something dumb that results in an injury. Brian Nguyen, owner of Brik Fitness (Redondo Beach, California), who previously worked with NFL teams, saw dumb mistakes even at the highest level of competition.

“I’ve seen a coach instruct linemen to throw med balls at the outside of a lineman’s knees while he was doing the drills to simulate a cut block and strengthen them against MCL injuries,” he recalls. “In doing so, two guys got MCL injuries.”

When this was noticed by the strength and athletic training staff, it was immediately stopped. But the idea is never do anything that puts you or a teammate at risk during training. No exceptions.