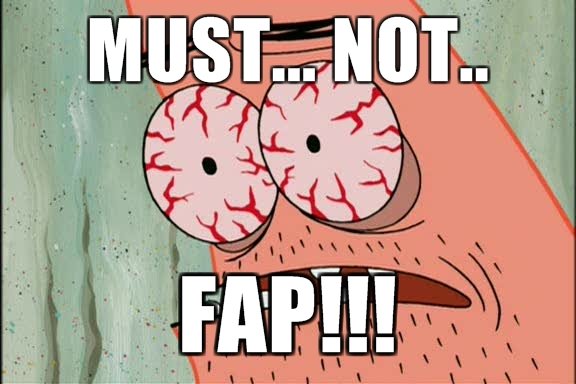 We all have days when we just can’t be bothered.

Maybe it’s the thumping hangover encroaching on your productivity, maybe it’s the miserable weather dampening your mood, or maybe you just really want to find out whether the couple in Escape To The Country are prepared to go over their budget to get the house of their dreams.

Whatever the excuse, dragging yourself to the gym when you’d rather be anywhere else is, as any self-important fitness guru will tell you, the difference between reaching your goals or ending up a fat, pathetic loser flipping burgers in a lay-by while your wife straddles her personal trainer for reps.

So what are the best ways to get yourself off the sofa and into the gym?

Ask Google this question and you’ll no doubt be met with the same rehashed, insipid advice from fitness “enthusiasts” with names like “Debbie” who have kooky Twitter profiles about bacon and hamsters and look like their idea of a heavy workout is strumming themselves senseless to The Great British Bake Off.

Well in true GymTalk fashion, we’re here to give you something a bit different and a bit less crap.

So, without further ado, here are five unconventional ways to get pumped up for a workout…

When we interviewed Frank Yang a few years ago, the topic of squatting heavy with a gun to your head came up.

In the context of that interview, where other discussion topics ranged from homosexual incest to lifting weights with your penis, you’d probably dismiss this assertion, but Yang was definitely on to something.

It is well-documented that the body’s fear response mechanisms can instill in us a primitive, effectively superhuman strength which we would not be able to access in ordinary circumstances.

Throughout history, there have been countless instances where ordinary people have mustered extraordinary strength (lifting cars, fighting off bears, etc) in order to save their life or the life of others.

Indeed, studies regarding the bio-mechanics of weightlifting show there is a distinction between the force our muscles our able to typically apply, referred to as “absolute strength” (around 80% for trained weightlifters and 65% for ordinary people), and the body’s maximum force (100%), generated through the conscious exertion of will.

So how best to exploit your body’s fear mechanism and generate maximal strength for your workout?

While it’s certainly inappropriate to put you or your loved ones in genuine danger for the sake of adding 5kg to your squat PR, a realistic representation or role play scenario will certainly inject some adrenaline into your session.

If you own a power rack, why not go into full-on Deer Hunter mode and have a spotter hold a gun to your head, shout obscene threats in a high-pitched oriental accent and slap you repeatedly in the face.

Get creative by all means, but please remember we cannot be held responsible if anything goes wrong, i.e. long-term psychological scarring or the neighbours reporting you to the police.

According to research propagated by the USSR a few decades ago, listening to “noxious” music provides an extra boost when working out.

It’s a well known fact that anger is an effective motivator (research overwhelmingly indicates that feeling angry increases performance), and there’s no anger quite like hearing Burn by Ellie Goulding for the 6th time that hour in your local gym.
make it stop gif

So if there is any artist that sends you into a seething, Hulk-like frenzy (Cliff Richard, Mick Hucknall), get it pumping through your headphones and watch your 1RM squat soar.

If you want to go into full-on brutal Soviet mode, why not further enhance your workout by stripping down to your underwear and enlisting a balding colonel to shout homophobic abuse at you while repeatedly punching you in the sternum.

Although the old adage that ejaculation negatively affects testosterone levels (hence why boxers would refrain before a fight) has been debunked, there is still plenty of evidence to suggest that a period of blue balls can have a dramatic psychological impact, enhancing your mood and productivity levels while eliminating depression and anxiety.

In both cases, the overloading of dopamine (your body’s feel good neurotransmitter) on a long-term basis causes an imbalance that eventually dulls your pleasure receptors.

This, in turn, leads to symptoms such as erectile dysfunction, depression, anxiety, and lack of motivation.

Purge your mind of all those pixelated nipples and Eastern European sex noises and channel that energy into something more productive – i.e. deadlifting 200kg.

Or maybe just have sex with a real woman…

Let’s face it, your current gym buddy is useless.

Upon arriving at the gym they’re more interested in playing Clash of Kings on their phone, hitting the cross trainer instead of the power rack, and getting a second opinion about the cyst on their scrotum.

Lifting with a lacklustre gym buddy is like marital sex:

If this sounds familiar, then it’s time to trade your gym buddy in for an upgrade.

There are lots of ways to find someone who will motivate you to work out harder.

That is, a cross between the foul-mouthed drill sergeant in Full Metal Jacket and the tyrannical music teacher in Whiplash.

We’re talking someone who will respond to any limp excuse by throwing a heavy object at your face and threatening to sodomise your sister.

You could register on specialist websites (like dating but for gym buddies) or go a bit off piste with some more creative methods:

For example, approach the strongest guy in the gym just as he re-racks a 250kg squat and ask him how many more sets he has.

When he tells you, with an irritable bark and a look of complete scorn, that he has only just started, simply stare at him with vacant eyes and hold your ground.

As the social awkwardness mounts, he will have no choice but to concede to gym etiquette and say you can work in with him if you like.

As any seasoned gym rat will tell you, this ritual now means the two of you are gym buddies for life.

Just like embracing fear, channeling hate can also give you a killer mentality in the gym.

In most gyms around the country, you should be able to fire up your aggression between sets by simply taking a look around.

For example, during my workout this morning, observing the following made my blood boil.

Another technique is to do an Arya Stark and make a mental list of anyone who’s ever wronged you:

Let the anger and irritation seep through your veins – and then take it all out in a controlled manner on the bar.

Use the force, Luke.

So, there we have it, five unconventional ways to pump yourself up in the gym.

Have you tried any of these methods?

Thinking of giving them a go?

I’d love to hear from you in the comments section below!