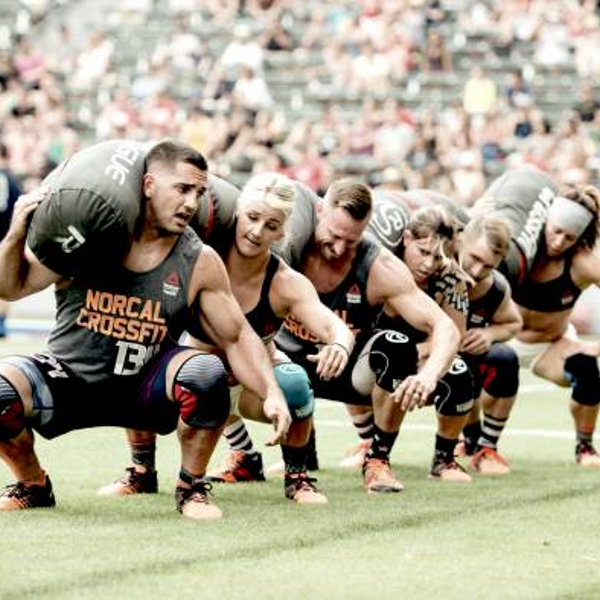 Dave Castro has come up with some pretty solid competition workouts. “The Pool” in 2013 (swimming and bar muscle ups) was a beautifully simple test of multiple layers of fitness and skill. The 2014 “Muscle Up Biathlon” (400-meter runs and muscle ups) was a fantastic and uncomplicated couplet that tested skill under fatigue.

But other workouts never quite panned out and either left the crowd scratching their heads, like the “Sprint Chipper” in 2013 (medball GHD sit ups, snatch, and wall burpees), or left the athletes busted up, like “Murph” in 2015 (running, push ups, pull ups, and squats). As this year’s Games season approaches, let’s examine three movements that need to go away forever and take a brief look at another three that might be fun to watch.

Ditch These
1. The Worm

Bury this thing once and for all. Worm squats, worm thrusters, or worm shoulder to overhead – they are just plain unwatchable. The worm may lend itself to difficult and challenging movements in a team competition, and I am all for teams working as a unit to complete a movement or sequence of movements. But it’s just ugly to watch.

Add to that the worm’s near-impossibility to judge, and it borders on the ridiculous. What is the standard for a worm “shoulder to overhead?” Is one judge able to identify twelve locked-out elbows in a fraction of a second? The fact that the worm, or some version of it, keeps appearing every year tells me that the Games brain trust is running thin on ideas.

This was a novelty in 2011 when only a handful of people could execute the movement with extreme proficiency, but now, it’s like walking upright. Unless you up the ante by making it an obstacle course or up a set of steps, a simple walk-for-distance is no longer challenging or exciting to watch. How about a handstand walk through a 6-8” shallow pond? Now you have my attention.

GRID got it right from the outset. Their Race 7 ladders feature a series of progressively heavier bars that are zig-zagged down the GRID. In 2014, CrossFit pilfered the idea of a speed ladder right from GRID, introducing a speed clean ladder with five bars. It didn’t pose much of an issue that year.

In 2015, that same ladder arrived on day three of Regionals directly after fifteen muscle ups. The resulting fatigue provided a trip-and-fall shit show that was second to none. Both individuals and teams failed to account for the apparent bounce of the bar, and were tripping and tumbling left and right. The same thing happened at the Games, only it was a snatch ladder.

The solution is simple – offset the bars so the athletes don’t have to go over the top of the bars to get to the next one. Why is that so hard, Dave?

I am aware they used proper cement Atlas stones in the CrossFit Invitational in 2015. Now let’s bring them to the Games. Not the rubber, sand-filled bags from 2012, but actual concrete stones. Nothing challenges every single ancillary muscle fiber, right down to your fingertips, like a stone. Stones demand strength, skill, agility, balance, coordination, and guts like no other movement.

Here’s an idea, Dave. Build a four-sided staircase in the tennis stadium with a single column at the top. In heats of four, athletes must shoulder a heavy stone and ascend the stairs with the stone on their shoulder. The first athlete who places it on the pedestal wins the heat. Single elimination until you have an eventual winner. The stones need to be heavy enough that it’s a slow grind up the stairs for maximum entertainment value, but not so heavy that they need to drop it every few steps.

(I have the sketches if you need them.)

Greg Glassman was teaching the HQ staff how to do these back in 2013. Then CrossFit issued a challenge for the community at large to submit their videos. But it was Tony Budding who brought them to the masses when he introduced them into GRID at the first combine in Las Vegas. Within one year, there was scarcely a GRID athlete who could not do a backward roll to support with proficiency.

CrossFit has stayed away from this movement as a competition piece, but it’s time to bring it to the Games. It’s an extremely technical movement, and entertaining as hell to watch.

Just what it says. Standard ring muscle ups, once the holy grail of every CrossFitter’s repertoire and a staple at the Games, are as routine as air squats now. Everyone can do muscle ups, so why not take it up a notch and separate out the elite athletes with high-level bodyweight movements?

Using a rope takes muscle ups to the extreme and tests something that rarely gets tested in its truest form: grip strength. Here’s a nice couplet for you: 5 rope muscle ups, 5 burpee back flips. 3 rounds. Go.

There is always the need for balance between entertainment and testing for fitness. Of course, testing for fitness supersedes entertainment value, which is why we have rowing for calories, assault bikes, and the TrueForm treadmill. However, I have no doubt whatsoever that ESPN always has an ambassador in the mix demanding that the television package be of value. You have to factor in how it plays on TV.

The “Introduce These” movements satisfy both the need to test fitness and the need to be watchable to the millions who tune in. The worm fails on multiple levels, and tumbling ass over teakettle on speed ladders only serves to wind up in CrossFit fail compilations. No one wants that, am I right?